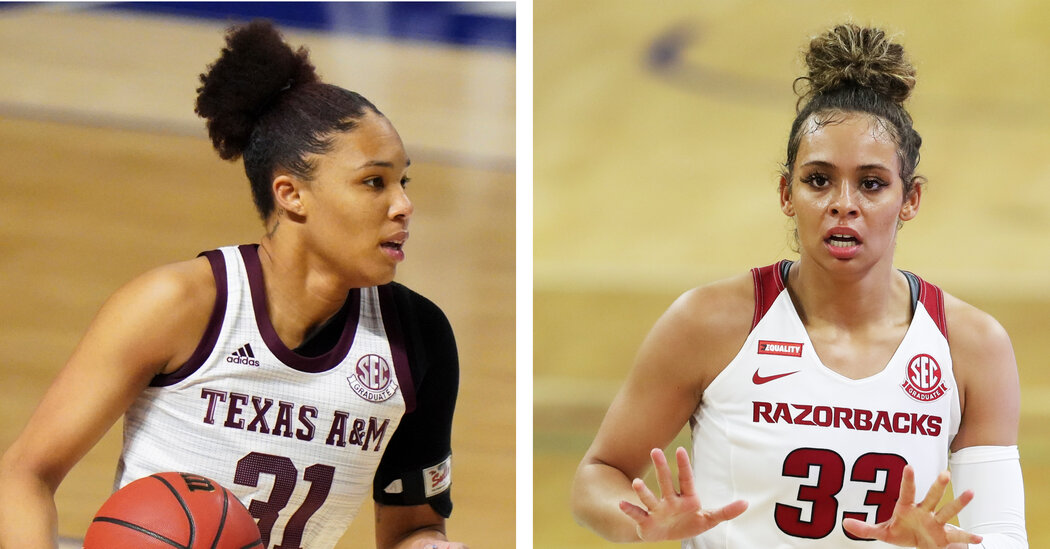 W.N.B.A. teams covet versatile, two-way play, and scores of players in the N.C.A.A. women’s basketball tournament displayed the skill, basketball I.Q. and strength to thrive in the professional ranks on both ends of the floor.

Several players who hope to be picked in the W.N.B.A. draft on Thursday night made deep tournament runs and had the big stages of the later rounds to prove their readiness. The players whose teams made early exits, however, were left to hope that their individual performances were strong enough to be remembered — or that one subpar outing would not overshadow an otherwise impressive collegiate career.

Here’s a look at five players who either didn’t make or didn’t last long in this year’s tournament but may still be one of the 36 drafted Thursday night. With the league’s 12 teams allowed just 12 roster spots each, an even slimmer number will make opening day rosters.

The Razorbacks’ first-round exit from the tournament was not a reflection on the 5-foot-11 guard Chelsea Dungee. Her game-high 27 points mirrored her high-scoring collegiate career, but they came in a game in which the opposing team, Wright State, hit 50 percent of its 3-pointers (to the Razorbacks’ 31.8 percent) in a 66-62 win.

During her 2020-21 senior season, Dungee scored in double figures in all 27 games. She scored 30 points or more in 12 games in her career, the most in team history. Free throws are an important part of her offensive repertoire; she exploits mismatches, draws fouls and makes 80.2 percent of her shots from the line.

Against Wright State, she made 14 free throws on 18 attempts — fitting for the leading free-throw shooter in Arkansas history. That she set the record for made free throws (552) in just three seasons — Dungee sat out the 2017-18 season because of N.C.A.A. transfer rules — emphasized her sharpshooting game. The record had been 485, by Bettye Fiscus in the 1980s.

If a dogged defender who made a name for herself by gobbling up rebounds and otherwise converting defense into offense is what a W.N.B.A. team seeks, it should look no further than N’dea Jones.

Setting aside a freshman season in which she averaged only about six minutes per game, Jones was Texas A&M’s biggest double-double threat, averaging 10.1 points and 11.1 rebounds a game in her final three seasons. Jones’s offensive production climbed year over year, including in the 2020-21 season that was shortened by the coronavirus pandemic. She pulled down her 1,026th career board as a senior, becoming the team’s career leader. She finished with 1,056, after just 33 as a freshman.

Jones’s double-double effort against Troy to open this year’s tournament was followed by a 9-point, 14-rebound performance that helped the Aggies advance past Iowa State to the round of 16 in overtime. Texas A&M’s tournament run ended there, against a formidable opponent: Arizona, the eventual tournament runner-up, which was led by point guard Aari McDonald.

Sometimes the box score does not reveal the full truth, and so it goes for the 6-4 center Kasiyahna Kushkituah, who averaged 6.8 points and 6 rebounds per game as a senior at Tennessee.

Even while starting just 23 of her 100 career games, Kushkituah began to carve out a niche for herself as an agile big. Her quickness was central to her ability to disrupt opponents’ offensive schemes; if she failed to record a steal or a block, she could reliably force opponents into sloppy possessions, leading to turnovers. And if the ball ended up in her hands, she could use her impressive speed to score on the break.

The 3-point shot is not in her arsenal, but she made half of her field goals. If she can improve her 47.5 percent free-throw shooting and maintain an appetite for offensive rebounds — which accounted for more than a third of her total career rebounds — she could become an important paint presence for any W.N.B.A. team seeking depth at center. In Tennessee’s first-round win against Middle Tennessee, Kushkituah scored 10 points and grabbed eight boards, five of them off the offensive glass.

Commonly referred to as Pull-Up Pulliam because of her smooth and reliable midrange shot, Lindsey Pulliam was the fastest player to reach 1,000 points in Northwestern women’s basketball history. A 5-10 guard, she finished her college career averaging a well-rounded 16.5 points, 4.2 rebounds and 2 assists per game. Her career shooting averages of 37.9 percent from the field, 26.6 percent from 3-point range and 75.6 from the free-throw line may not be the best in her draft class, but she has increasingly demonstrated that she can sizzle in the biggest moments, in whichever way her team needs:

With a game- and season-high 28 points, Pulliam carried the Wildcats to a double-digit win on Jan. 21; one week later, in a road game against Iowa, she helped Northwestern to a 7-point victory by converting 12 of her 16 free-throw attempts.

On defense, Pulliam secured 10 rebounds in early February against Ohio State (to go with 15 points) to help power Northwestern to a 12-point win. Her four steals against Eastern Kentucky in December helped the Wildcats score 40 points off turnovers and 28 on fast breaks on the way to a 29-point victory.

Overcoming an 18-point deficit but ultimately losing to Florida in the first round of the Southeastern Conference tournament kept Auburn from being invited to the N.C.A.A. tournament, denying the 6-3 forward Unique Thompson a national stage.

Despite the loss, Thompson, with 14 points and 10 rebounds, made her standard double-double contribution in her final collegiate outing. In 2020-21, she was one of two players in the nation to record two games of 20-plus points and 20-plus rebounds. As a junior in the 2019-20 season, she tallied her 21st double-double of the season and the 41st of her career, surpassing the three-time W.N.B.A. All-Star DeWanna Bonner for the most in team history.

If Thompson can improve her 66.3 percent free-throw shooting, she will solidify an otherwise stalwart game that features 52.8 percent shooting from the field. With a proficiency for cleaning the offensive glass — Thompson gathers 43 percent of her rebounds on the offensive side of the floor — she is ready to contend in the most competitive league in the world. Even without a national tournament run, Thompson seems poised for a first-round draft selection.