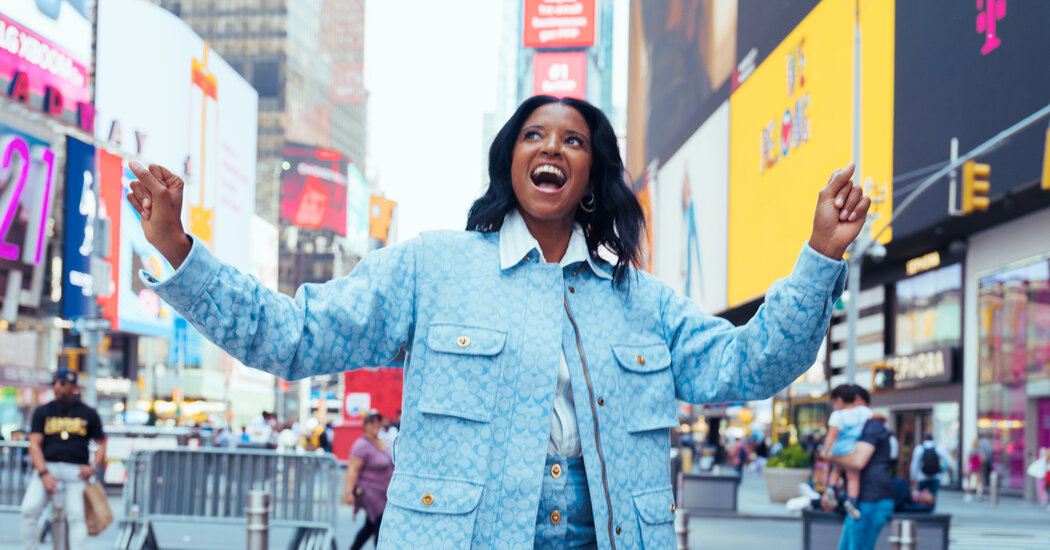 Goldsberry grew up in Houston, in a family of scientists and engineers. When she was 6 or 7, a cousin told her she could sing, really sing, and she was on her way. After earning her B.F.A., she worked in regional theater and booked a tour or two. “But I felt unfinished,” she said. So she moved to Los Angeles and earned a master’s degree in vocal jazz performance at the University of Southern California.

She tried the singer-songwriter route for a while, modeling herself on Natalie Merchant and Erykah Badu. She also briefly joined a girl group, Fe-Male. “We were exactly what Girls5eva was,” she said, “except they actually got signed.” Would she have taken girl group glitter over Lilith Fair integrity? “I absolutely would have been anything,” she said.

She found work as a backup singer on the ’90s legal dramedy “Ally McBeal,” until an independent film brought her back to New York, where she met her husband. She made it to Broadway, then, as replacements for Nala in “The Lion King” and Mimi in “Rent.”

In 2005, she appeared in Shakespeare in the Park’s “Two Gentlemen of Verona,” where Ben Brantley, writing in The Times, called her, “the production’s true find, a sparkplug of musical wit and vitality.” In the audience one night were the director Thomas Kail and the writer and performer Lin-Manuel Miranda. “It was like watching this meteor shower,” Kail recalled. “It was indelible.”

So a decade on, after a recurring role on “The Good Wife,” she got the call to audition for Miranda’s “Hamilton.” Goldsberry had lost out on plenty of parts before and gone on to cheer the women who originated those roles. “With ‘Hamilton,’ I didn’t think I could have survived that,” she said. She didn’t have to.