The boat was rocking as white-tipped waves slapped our hull before breaking on the rocky shore. Nothing unusual about that on a cruise, but the vast expanse of choppy water I had woken up on was not the sea.

I’d never felt this sort of motion on a river cruise before but this was one of the surprises during a voyage of adventure along the Lower Danube on the river’s journey to the Black Sea.

The Danube is a popular destination for river cruises, with dazzling capital cities Vienna and Budapest on its banks and pretty Cesky Krumlov and Salzburg within easy reach. Yet sailing east of Budapest, as the river makes its way through Serbia and forms the border between Bulgaria and Romania, takes you farther and farther off the beaten tourist track. 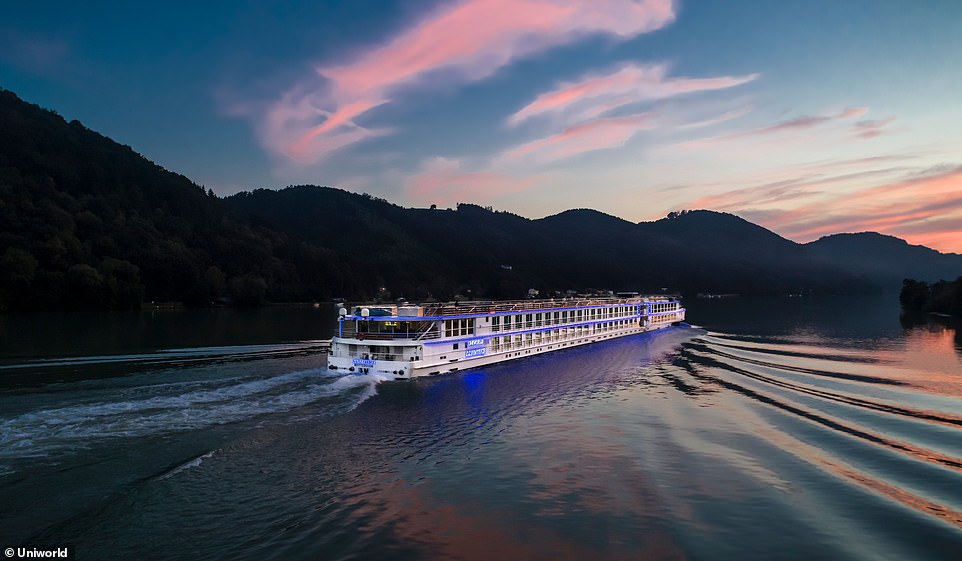 Caroline Hendrie sailed along the Danube, snaking through Serbia, Bulgaria and Romania. She travelled on Uniworld’s luxurious SS Beatrice, pictured 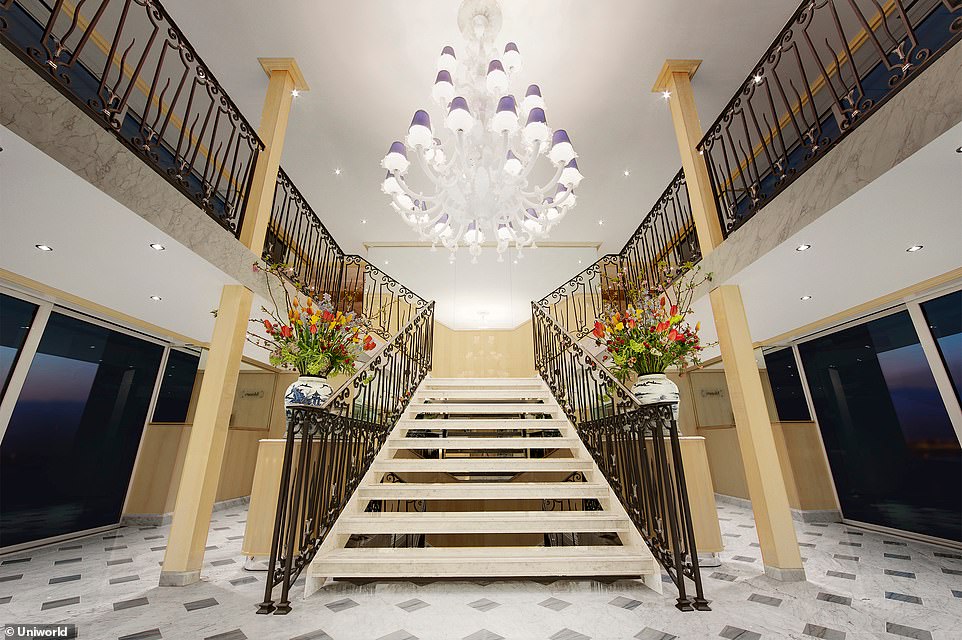 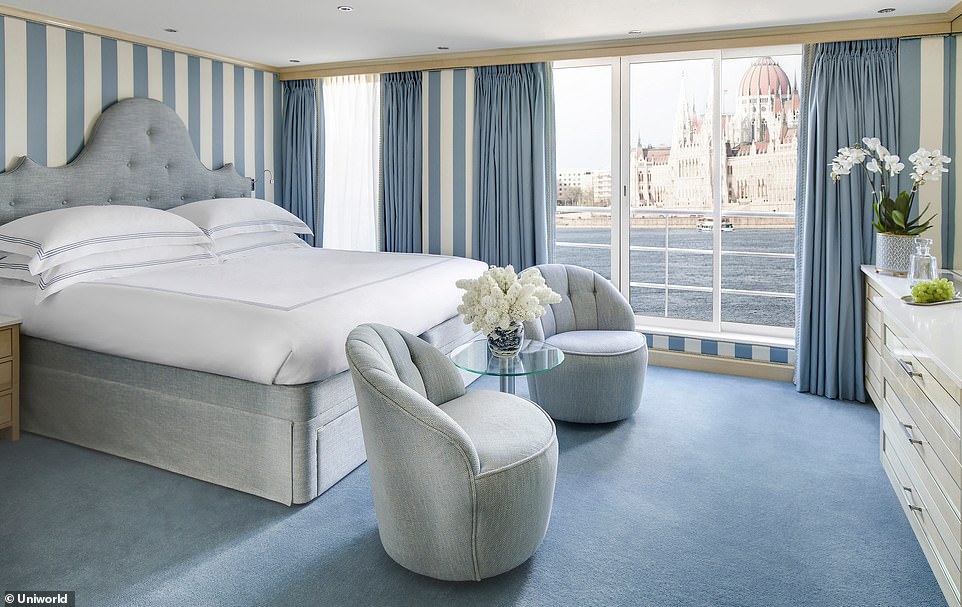 One of the suites onboard the SS Beatrice, complete with floor-to-ceiling windows so guests can admire the views from bed

By the time we docked near ten-towered Golubac Fortress, rising from the dark water, all was calm. Starting in the Carpathian Mountains, the Kosava is a squally wind that can lower the temperature to -30C in winter and gather clouds of dust in summer as it follows the Danube and jets through the Iron Gates Gorge as far as Belgrade. But this was spring and as the wind dropped, the river and castle were bathed in sunshine.

Golubac Fortress has stood for 700 years, and has been fought over for centuries by Serbs, Magyars and Turks, owing to its strategic position. As we gazed up at its battlements, the long, sleek white form of our riverboat, SS Beatrice, glided past on its way downstream.

This was our cue to board coaches for the half-hour drive along the right bank of the Danube to Lepenski Vir. A gentle riverside path past old-fashioned cottages took us to a huge glass and metal structure covering a pre-historic site.

The remains of a village, occupied between 9,000BC and 6,000BC, were excavated in the 1960s. And, like Abu Simbel in Egypt, every stone was moved to a higher spot before the construction of a dam submerged its original position under an artificial lake. 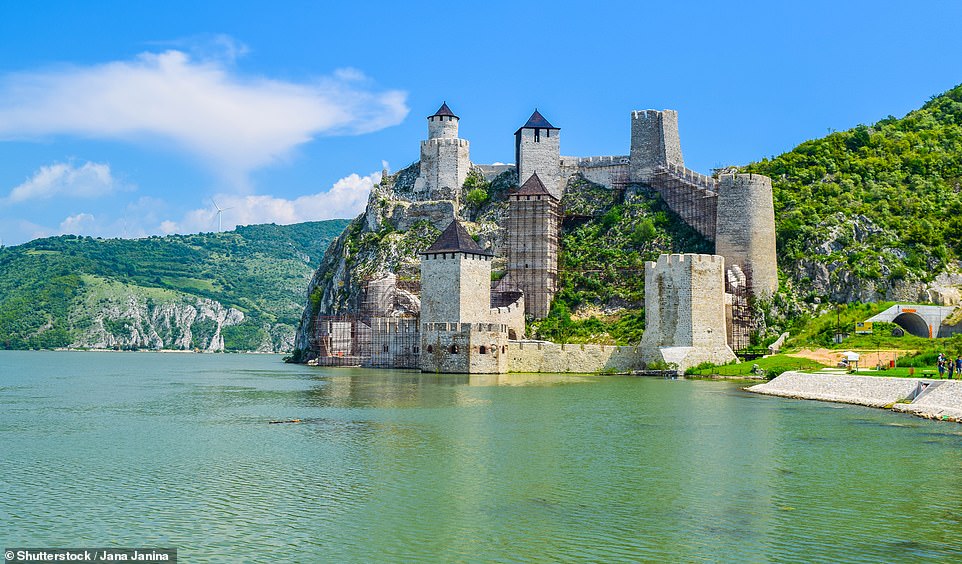 Towering sight: During her river voyage, Caroline passed by the Golubac Fortress, which dates back 700 years. It has been fought over for centuries by Serbs, Magyars and Turks, owing to its strategic position 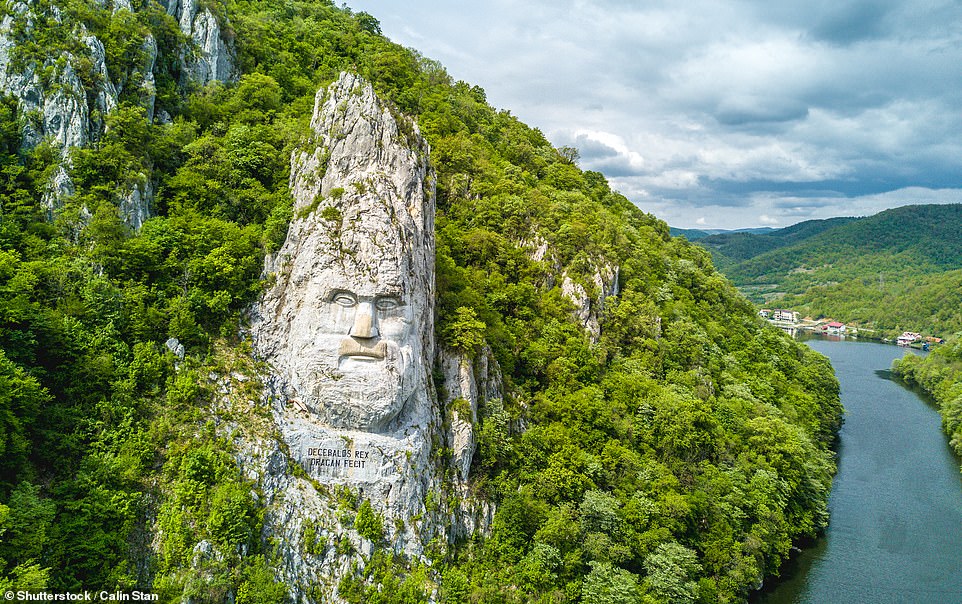 The carved head of King Decebalus, who fought the Roman Empire in the 1st Century AD, was another highlight as the ship sailed through the Iron Gates Gorge

On view are burial plots, altars, boulders carved with faces and patterns, trapezoidal foundations of houses, pottery, jewellery and implements of the Mesolithic and Early Neolithic eras.

Like the original village, every house’s doorway faces a high granite peak, with an outline like a roughly hewn trapezium on the opposite bank, probably of religious significance.

Rejoining our luxury floating hotel downstream, the afternoon passed with scenic cruising through the Iron Gates Gorge, cutting through the Carpathian and Balkan Mountains.

We sat on the large top deck listening to a commentary, triggered by GPS, through earpieces as we sailed between cliffs soaring 1,600ft.

Our eyes were directed left, to a looming sculpture of a long-faced King Decebalus, who fought the Roman Empire in the 1st Century AD. How extraordinary that it was carved into the rock on the instructions of a Romanian businessman and completed only in 2004. 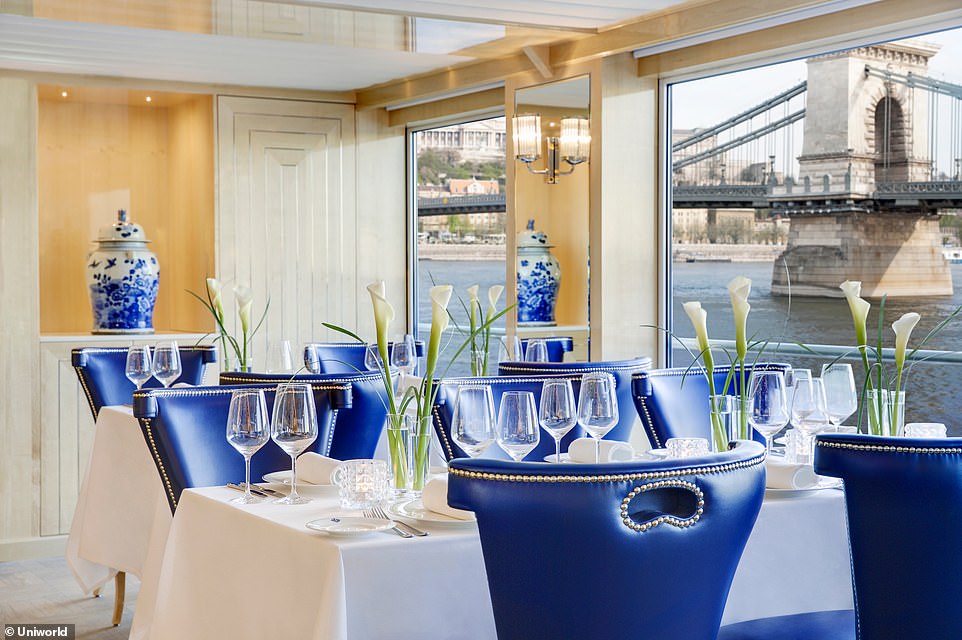 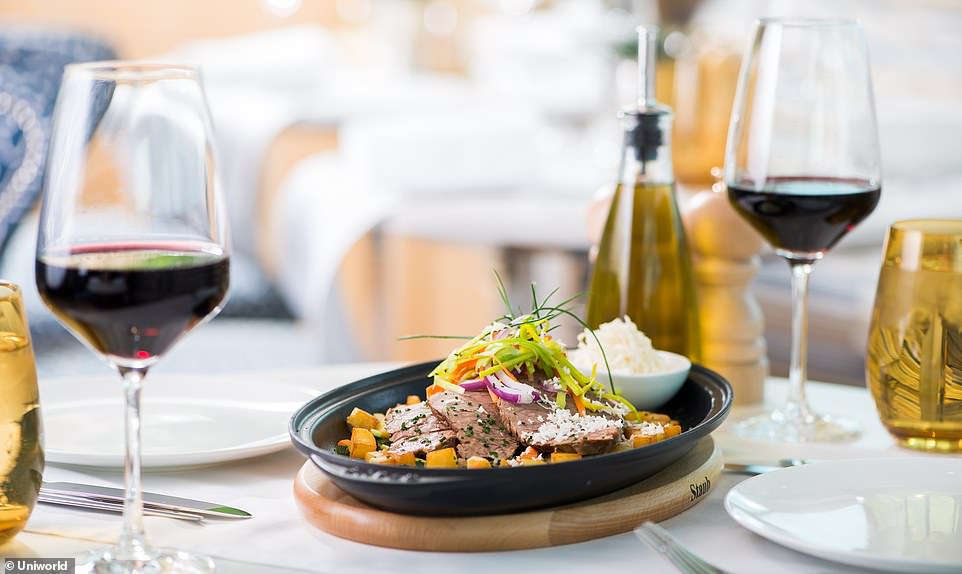 The small Schubert’s cafe serves Central European dishes such as wiener schnitzel and chicken paprika. Pictured, an example of one of the artfully presented menu options

Harder to spot on the Serbian side was genuinely ancient Trajan’s Plaque, carved to celebrate the completion of a tricky bit of strategic Roman road in 100AD.

The SS in re-named SS Beatrice stands for Super Ship, after a bow-to-stern revamp of popular vessel River Beatrice in the Uniworld fleet. This included stretching her a few feet to accommodate a grand staircase and Murano glass chandelier.

The small Schubert’s cafe, an alternative to the main Mozart restaurant, serves Central European dishes such as wiener schnitzel and chicken paprika.

A rich cultural programme on board included a Bulgarian yogurt-making demonstration and tasting, which was followed by folk dancing by schoolchildren and a recital by Vox Medicalis Chorus, a choir of talented Romanian student doctors. 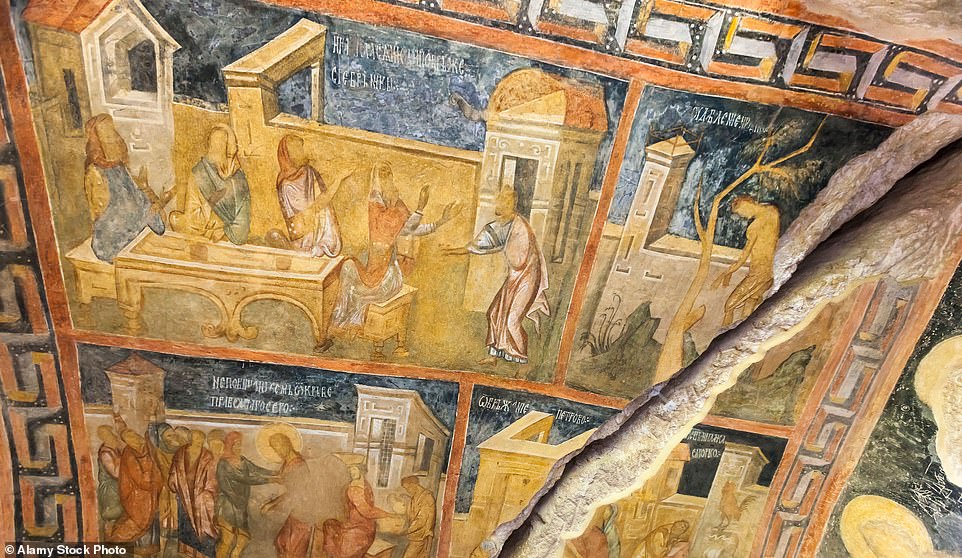 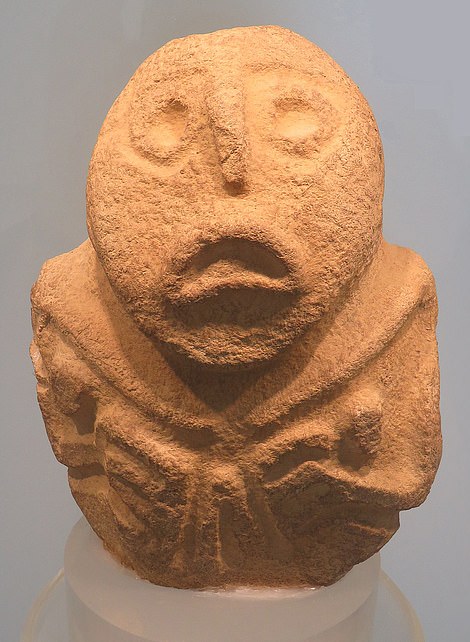 A statue at the Lepenski Vir archaeological site in Serbia

Wherever we moored a choice of excursions were offered (included in the fare). From Vidin in Bulgaria, I opted for a coach trip to the Red Rock Country in the foothills of the Balkan Mountains close to the Serbian border. After coffee in a hotel in Belogradchik, it was time to explore the 200-million-year-old rock formations, whipped by wind and ice into curious shapes and a natural defence for the town since Roman times.

A brisk hike up paths and stairs took us through the 19th Century fortress gates and up to its summit where lookouts could send early warnings of invaders for miles around. In Ruse in Bulgaria there was a guided walk through its 19th Century boulevards and squares that gave the city the nickname ‘Little Vienna’.

In nearby countryside we walked up to the church of Basarabovo Rock Monastery, established in 1431 and still inhabited by monks. Then up to Ivanovo Monastery, where the sound of croaking frogs in the river carried up to our leafy path lined with blossoming plum trees to see remarkably well-preserved 14th-Century frescos in caves.

Travelling on SS Beatrice, waking up to a new adventure in a different location every day, with relaxing afternoons watching the scenery, is a great way to tour these remote regions of Europe.