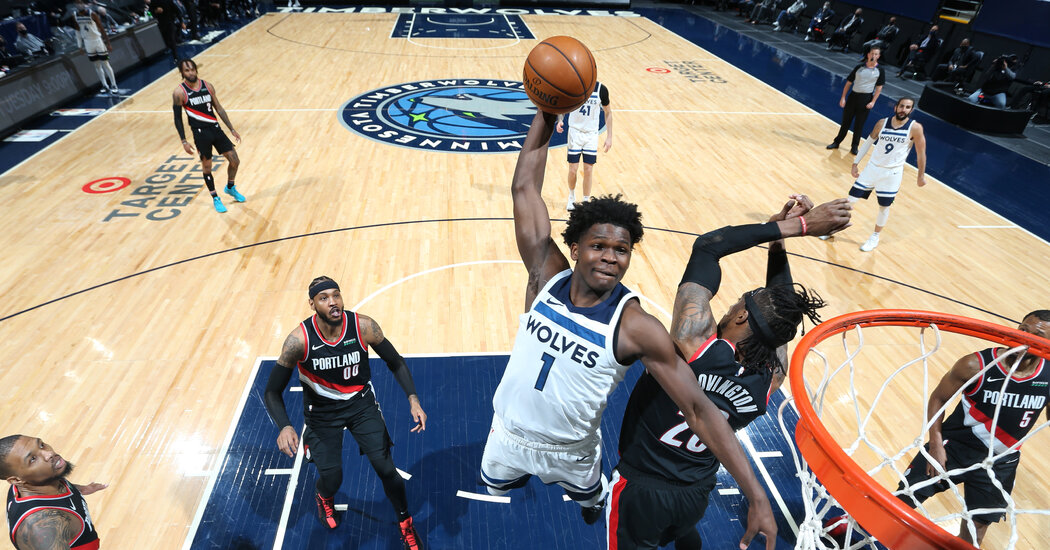 As a senior at Holy Spirit Preparatory School in Atlanta, Anthony Edwards commuted about an hour each way from his home in the southern reaches of the city. In addition to the geographical distance, the challenge was that he had no reliable mode of transportation. So he would lean on friends, family members, neighbors and coaches to ferry him back and forth. They wanted to help.

“People just enjoyed being around him,” said Tysor Anderson, Edwards’s coach at Holy Spirit, who was among those who gave him occasional rides.

Anderson, though, was more impressed that Edwards somehow made it work — that he was resourceful enough to find his way to school each morning. “He figured it out,” Anderson said.

Edwards’s ability to figure things out is a skill that he has been working to apply this season as a first-year shooting guard for the Minnesota Timberwolves, a longtime fixer-upper franchise. As the top overall pick in last year’s N.B.A. draft, Edwards, 19, has been the center of attention for a struggling team, offering the Timberwolves’ fans some hope for the future.

Glimpses of that future have come in the form of a 42-point performance against the Phoenix Suns and highlight-reel plays, including a dunk against the Toronto Raptors that was so explosive Edwards immediately peered toward the Jumbotron above center court so that he could watch a replay.

Edwards, who appears to be 6 feet 4 inches and 225 pounds of tightly coiled springs, is averaging 18.3 points and 4.3 rebounds for the Timberwolves, who are 16-44 ahead of their game against the Utah Jazz on Saturday night.

Edwards has already revealed himself to be one of the league’s more engaging personalities, a player who has managed to elevate humdrum, pandemic-era video conference calls to high art. There was an interaction with an Irish reporter that went viral after his accent drew admiration from Edwards — “I want to learn how to talk like that,” he said — and, more recently, the rookie’s introduction to Alex Rodriguez, who is nearing a deal to become one of the Timberwolves’ new owners.

“I don’t know who that is,” Edwards said in a call with reporters this month.

Edwards has since familiarized himself with Rodriguez’s body of work (he used to play baseball), and they even had an exchange on social media.

There are also moments when Edwards sounds like the most confident person on the planet. He is convinced, for example, that he could have played professional baseball. Or football, for that matter. (Once upon a time, he said, he was the best 10-year-old running back “in the world.”) Mere months into his career in amateur table tennis, he considers himself the best player on the Timberwolves. He would like to get involved in the rap game — as a producer and a performer, because why not?

“I love music,” he said with a disarming smile.

In a way, Edwards seems unaffected by the pressure that comes with being a top pick who will go a long way toward dictating the future of an N.B.A. franchise. And those who know him best say that his temperament makes him uniquely equipped for the role.

“I’ve always been struck by how effortlessly himself he is,” said Anderson, now an assistant coach at Jacksonville State. “He laughs. He talks. If he has questions, he asks. If he has an opinion, he opines. And if he doesn’t know about something, he won’t pretend that he does.”

It has not been an easy season for N.B.A. rookies. Summer league was canceled because of the pandemic, and training camp was abridged. Now the schedule of games is compressed. Timberwolves Coach Chris Finch, who replaced Ryan Saunders on Feb. 22, said that he had been able to organize about a half-dozen practices since he took over and that half of those had been walk-throughs without much on-court activity.

In other words, Edwards is learning on the fly against a buffet of far more experienced opponents. Finch, though, has found him to be highly coachable — perhaps too coachable at times.

A few weeks ago, Finch stressed to his players that he wanted them to “play through” Karl-Anthony Towns, the team’s starting center and another former No. 1 overall pick. Edwards took the message to heart.

“He kind of went through this period where he wasn’t aggressive at all because he was just trying to get the ball to KAT all the time,” Finch said, referring to Towns by his nickname.

Edwards, though, is still a teenager who is not all that far removed from Holy Spirit, where he established himself as a star. Shortly after Anderson was hired by the school in 2018, Edwards attended the Pangos All-American Camp in California and made an impression.

Edwards was soon on his way to another elite summer showcase, the National Basketball Players Association’s Top 100 Camp, and Anderson knew he had to be there — if only so he could actually meet Edwards. He wanted to make sure that Edwards did not transfer to another high school before the start of his junior season. But the camp was a tough ticket. Anderson called his grandfather, the longtime college coach Lefty Driesell, who had connections.

“Granddad,” Anderson recalled telling him, “I don’t ask you for much, but I’ve got to get in the building.”

Driesell delivered, and Anderson took Edwards to dinner, where they bonded over a conversation about the video game Fortnite. Anderson soon learned more about Edwards and the hardships he had experienced. When Edwards was 14, his mother, Yvette, and his grandmother Shirley both died of cancer. They were enormous figures in his life.

“They made me happy,” Edwards said. “So I just try to stay happy.”

Edwards wound up staying at Holy Spirit, but only for a season. He was so dominant that he reclassified as a senior so that he could graduate early and enroll at Georgia.

“You didn’t have to be a genius to watch one of his games and figure out that this guy didn’t need any more high school basketball,” Anderson said. “He barely needed college basketball.”

With the Timberwolves, Edwards has discovered that each game presents a fresh challenge. The N.B.A. is not the N.C.A.A.’s Southeastern Conference.

“Everybody on the court is good,” he said. “That’s the difference. Everybody can go.”

After Finch got the job, he talked to Edwards about eliminating some of the low-percentage shots cluttering his games — the midrange pull-ups and the 3-pointers that he was launching off the dribble. Finch wanted him to get to the rim, seek contact and attempt more catch-and-shoot 3-pointers, because he was already making a solid percentage of those.

“We wanted him to be more efficient,” Finch said. “So much about being a good shooter is getting rid of the bad shots.”

Edwards feels more comfortable now than he did through the first few months of the season, when rookies “don’t know anything,” he said, and his production reflects it. Since the N.B.A. All-Star break in March, Edwards has averaged 23.3 points while shooting 43.5 percent from the field and 34.5 percent from 3-point range — solid numbers that reflect improvement over the season and still show room for development.

For his part, Edwards said he did not have specific goals other than to “be the best version of myself.” And what does that look like? “I don’t know,” he said. “I’m just 19.”