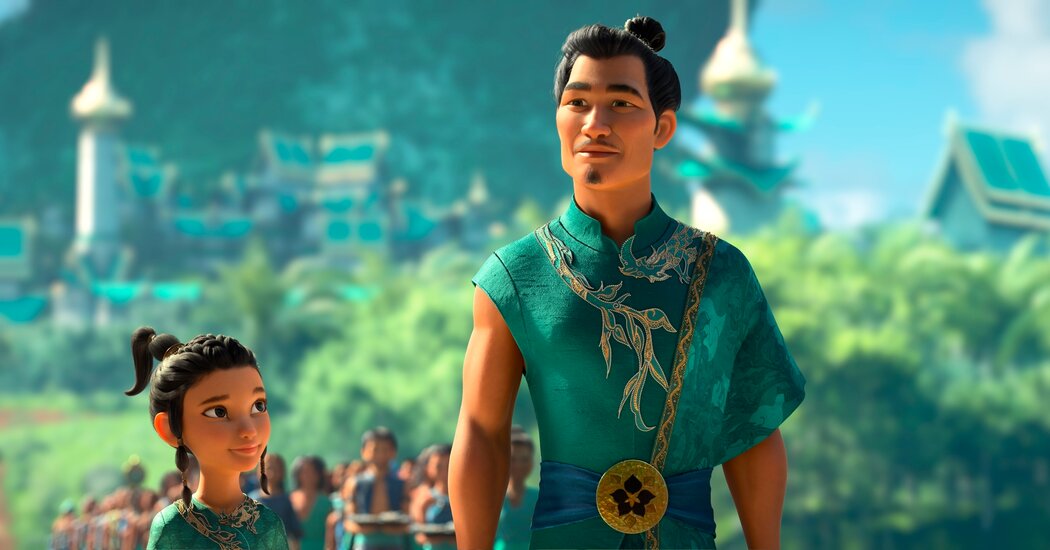 And then there are recent events, which may have added more fuel to our fire. “Of course, there’s the ineffable factor of quarantine, where everybody briefly lost their minds,” Adewunmi said. “If you have nothing to do but roll from your bed to your laptop, you might say, ‘You know what I’m going to linger on today? The dad from ‘Onward.’”

And if you’re single and still struggling through the pandemic, isn’t it appealing to imagine a generally good-natured, relationship-oriented figure who’d happily be there for you? After “Raya” was over, I half-expected Benja to leap off the screen and onto the couch beside me, where he’d finally be the supportive partner I need to watch dumb episodes of “The Circle” with. Plus, he looks great in patterned aqua-blue tunics, and you can’t say that of every dad.

“See, I don’t think even I could pull that off, so in some ways, he’s far superior to me,” said Daniel Dae Kim. When I called Kim up a few weeks ago, “Raya and the Last Dragon” had just been released and he’d begun to pick up on the internet’s stirrings. “And I’ve also gotten a lot of comments on how that character looks like me,” Kim said. “So I guess by the transitive property, I will take that as a compliment.”

In fact, Kim revealed that Benja got hotter as development wore on: “The character that I saw originally was thinner and leaner and longer,” he said. “I thought that was intriguing, and then when I saw a rough cut, he had grown wider, he had gotten a little bit more muscular, and I noticed a hairline that was kind of similar to mine.”

Still, there must be more to all this than just some well-rendered computer modeling, right? As Kim mused about Benja’s appeal, he wondered whether these animated dads provide a feeling of G-rated comfort in a cultural moment that sorely lacks it.

“In some ways, I think Benja is the dad we all wish we had,” Kim said. “He’s a warrior, but he’s kind and compassionate to his children and looks to unite people as opposed to divide them.”