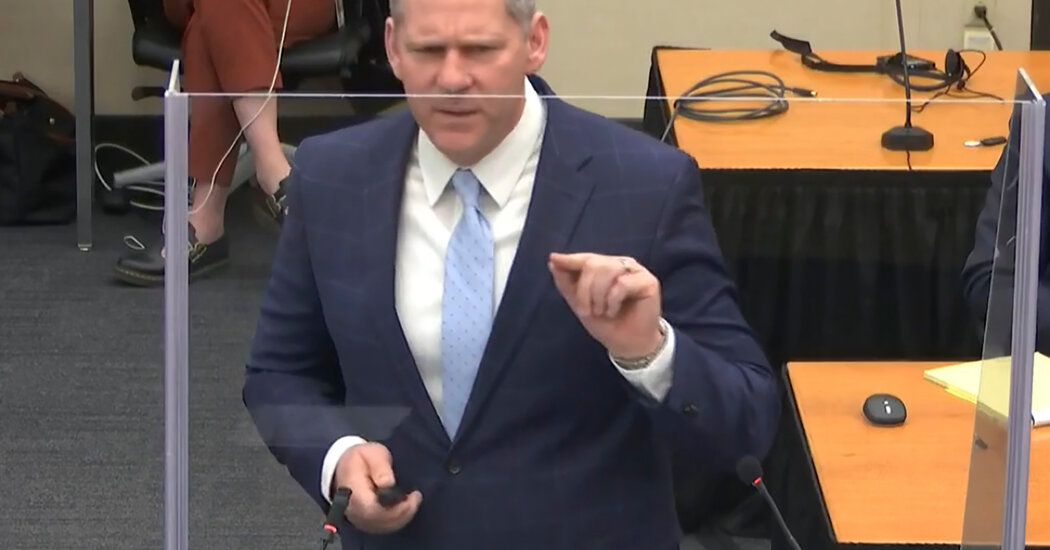 After weeks of testimony and months of anguish, the arguments in the trial of Derek Chauvin came down to: Should you believe your eyes?

In a closing argument aired and streamed nationwide, the prosecutor Steve Schleicher hit many of the points you would expect in arguing to convict the police officer in the killing of George Floyd: the timeline, the expert testimony, the elements of the charges. But ultimately the part of star witness was played by the bystander video that detailed Mr. Floyd’s final minutes.

In a way, the trial began as soon as the video emerged after Mr. Floyd’s death last May, beginning a summer of protest and leading to a national reckoning. If you haven’t seen it at this point, it has probably taken a concerted effort.

The Chauvin trial was not like many high-profile cases — say, the O.J. Simpson murder trial — that involved reconstructing acts that we could not witness. We already knew we saw something repugnant outside that Cup Foods store in Minneapolis. The final debate before the jury, much like the trial that preceded it, was largely about whether this was all as bad as it looked.

For the prosecution, the answer was a simple yes. “Believe your eyes,” Mr. Schleicher told the jury. “What you saw, you saw.”

And we saw it again. Mr. Schleicher walked the jury, and the millions watching at home, through the eyewitness and bodycam videos one more time, pausing to highlight key moments. Often the prosecution used stills, as with the bodycam image of a seemingly terrified Mr. Floyd in his car, an officer’s drawn gun looming in the foreground. “How does Mr. Floyd look in this photo?” Mr. Schleicher asked.

It has never been an easy sight to see; it has not gotten easier over the past year. The images of a dying man’s terror and agony, the knee on the neck, played and replayed, have made Mr. Floyd’s death a symbol for a racial-justice movement. But they also have had a collectively brutalizing effect.

In its selection of clips and images, the prosecution focused not just on Mr. Floyd’s pain but on Mr. Chauvin’s acts. It drew on the footage to play out a timeline and to tell a story about the defendant’s character and mind-set, in small moments such as when Mr. Chauvin, with Mr. Floyd pinned underneath, appeared to casually pick a pebble from the tire of the car next to him.

Above all, there was a still image of Mr. Chauvin, kneeling on Mr. Floyd, hand on hip, head cocked to the side, staring into the bystander’s camera. He’s looking directly at the viewer, which in the language of image, says that he is aware. He knows the witness can see what he’s doing, and he’s doing it anyway. Whether that carried any legal weight or not, it was potent emotionally, and judging by how many times it was onscreen, the prosecution seemed to know it.

If the prosecution had the simpler job, to tell the jury “It’s exactly what you saw with your eyes,” Mr. Chauvin’s defense had to try to complicate the images — to argue, or imply, that there was more here than met the eye.

Throughout the trial, the defense has tried out the idea that appearances can be deceiving, introducing the psychological concept of “camera perspective bias” and contending, in the words of the defense attorney, Eric J. Nelson, that officers can take actions that “still may be lawful even if they look bad.”

They did look bad. Mr. Nelson seemed to acknowledge how difficult the brutal video was to rebut, at one point criticizing the amount of attention the prosecution gave it — “9 minutes 29 seconds, 9 minutes 29 seconds,” he repeated. “It’s not the proper analysis.”

So where the prosecution centered the damning images, Mr. Nelson sought to surround them, and maybe dilute them, with a constellation of counter-images.

The defense showed the attempt to put Mr. Floyd in the squad car from the perspective of bodycams, which captured the scene as chaotic and jittery. As if to counter Mr. Chauvin’s kneeling stare, the defense used a still of a resisting Floyd, his eyes looking into an officer’s camera. (It’s worth pointing out that the “camera perspective bias” the defense brought up earlier in the trial has been used to describe specifically how police body camera footage can lead an audience to adopt the officer’s point of view.)

At times, Mr. Nelson’s lengthy presentation — the judge, Peter A. Cahill, abruptly interrupted it for a lunch break — took on a media-studies dimension. He talked about the difference between “perspective” (the angle from which you see an event) and “perception” (how you interpret what you see).

Essentially, the defense’s closing argument aimed to change the jury’s perception by changing their perspective — trying to get them to see the same images from the vantage of, as Mr. Nelson repeated constantly, “a reasonable police officer.”

The prosecution rebuttal, by Jerry W. Blackwell, attacked the implication that there were “two sides to every story” here, which in turn led to a defense objection to the use of the term “story.” (The defense also complained that fictional TV series have referred to the case, arguing that this could have influenced jurors.)

The judge sustained the objection. But the ruling is not binding outside the courtroom, where it’s obvious we’ve been watching a battle over narratives.

It has been almost a year since we first saw this dying man fight for breath, pinned to the pavement of an American city. The question remains whether the George Floyd video is a rare case in which all or most of us can agree on what we’re seeing, or one more picture that changes with the beholder’s chosen frame.