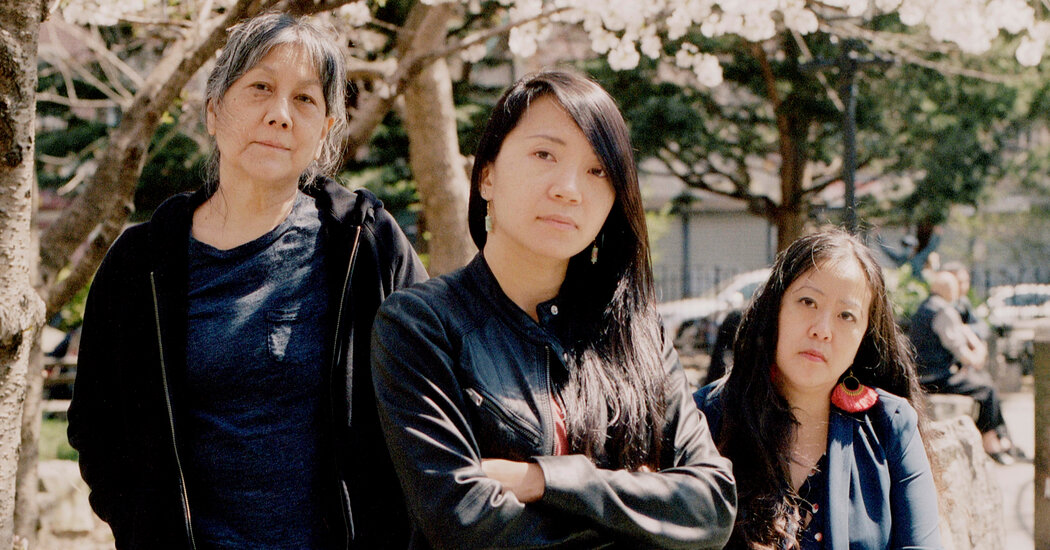 Early in the pandemic, word started to travel among Asian-American artists: racist attacks were on the rise. Jamie Chan told a fellow artist, Kenneth Tam, about getting kicked out of an Uber pool ride by the driver who noticed her sniffling. Anicka Yi, an artist based in New York, called Christine Y. Kim, a curator at the Los Angeles County Museum of Art, to talk about being spit at on a Manhattan street; Kim, in turn, recounted being accosted in a Whole Foods parking lot.

Tam decided to start recording these incidents in a Google spreadsheet he named “We Are Not COVID.” It circulated on social media first among arts communities, then to wider audiences. Over the last several months, the document has filled up with reports ranging from microaggressions to outright violence.

“I had assumed that things like this were going to start happening, but not so quickly, and not to people I knew,” Tam said in a phone interview. “It made me realize that I needed to educate myself and perhaps other people about it.”

The rise of racist attacks, some of them horrifyingly lethal, has galvanized Asian-American artists around the country. They are leveraging social media to raise awareness, gathering to protest despite the pandemic precautions, making new work, and — perhaps above all — finding new grounds for solidarity with one another and with other affected communities to figure out how to respond to the current climate.

Recent anti-Asian sentiment may have been stoked by Donald Trump’s xenophobic response to Covid-19 — which he repeatedly called “the Chinese virus.” But it existed long before him, since the arrival of Chinese workers in the 19th century, and stubbornly persists, even after his departure from office.

The effects of this rhetoric have laid bare the vulnerabilities of a group that comprises five percent of the U.S. population, and is breathtakingly diverse in its makeup, marked by extreme disparities in income, language and culture.

The murders in Atlanta, in which a young white man killed workers and others in Asian-owned massage businesses, highlighted additional complexities of gender and race: of the eight victims, six were Asian-American women, mostly of Korean descent.

An exhibition titled “Godzilla vs. the Art World: 1990–2001” that was scheduled to open in May at the Museum of Chinese in America, and a forthcoming anthology edited by the curator Howie Chen about the group, called Godzilla, are timely reminders that activism is not new for Asian- American art workers. They have been organizing for years to increase representation, improve their visibility and forge alliances with other groups.

A loose affiliation of artists and curators, Godzilla was founded in 1990 in New York City by Ken Chu, Bing Lee, Margo Machida, and others. The group tackled problems associated with being Asian-American in an art world that tended to see race only in terms of Black and white. In the wake of the 1991 Whitney Biennial, it wrote to the museum’s director to object to the near-absence of Asian-American artists.

The message had its intended effect: The 1993 biennial included work by several artists of Asian descent, including Byron Kim. His “Synecdoche,” a minimalist grid of painted panels, each keyed to the precise skin tone of a friend, a neighbor, or stranger, functioned as an abstract group portrait of his multicultural world.

A recent series of abstract works by Kim signals an important shift: It still focuses on skin — but this time that skin is bruised. Done around the time of the 2016 presidential election, the pigment-dyed canvases are less a celebration of multiculturalism than a subtle commentary on the rise of xenophobic and racist politics in the United States.

Likewise, today’s wave of activism seems less concerned about representation — inclusion of artists in exhibitions or hiring of more Asian-American museum staff — than on larger issues like the surveillance of immigrant neighborhoods, income inequality, and decriminalization of sex work — that put their communities at risk.

This change in approach recently led 19 artists involved in Godzilla to withdraw from the exhibition planned by the Museum of Chinese in America in protest of what they called the museum’s “complicit support” of the construction of a jail in Chinatown. (The museum received a $35 million concession from the city, part of a program to invest funds in neighborhoods affected by the construction of facilities in the aftermath of Rikers Island’s closure.)

“The way to fight this kind of xenophobia and white supremacy is to organize and fight the root causes of structural racism and capitalism,” said the artist Betty Yu, a founder of Chinatown Art Brigade (CAB). With her co-founders Tomie Arai and ManSee Kong, and a network of other artists and organizers, CAB has been working over the past five years to oppose the gentrification of New York’s Chinatown neighborhood and the resulting mass displacement.

The loss of affordable housing and the closing of garment factories employing thousands of new immigrants are not unconnected to the art world. More and more art galleries are moving into the area, driving up rents.

That encroachment has driven other activist groups to focus on the art world as an epicenter for talking about anti-Asian hate. Stop DiscriminAsian (S.D.A.), which came into being a year ago when Yi began to connect disparate Asian-centered groups and individuals working around the country, including Kim and Tam. As the group grew, the question of how to leverage their own positions in the art world became central.

“It was one of the compelling things that we thought that we as arts workers could contribute to, just because of the fact that so many art spaces, at least in New York and L.A. and even the Bay Area, were physically adjacent to Asian communities,” Tam said.

Because of shutdowns, S.D.A’.s work has largely been visible on social media — Instagram above all. The organization has created multilingual graphics and downloadable posters, generated memes, commissioned short videos by artists, co-sponsored a Zoom webinar series titled “Racism is a Public Health Issue,” and disseminated information about resources for Asian-Americans facing discrimination and guidance for their allies.

After the uprisings sparked by George Floyd’s murder at the hands of police last May, S.D.A. called on their followers to act in solidarity with Black protesters.

Its recent open letter against xenophobia and racial violence calls for alternatives to over-policing and the decriminalization of sex work. It also asks signatories to understand the way Asian-Americans have enabled or participated (sometimes unwittingly) in white supremacy, and work to dismantle it. So far, more than 1,000 artists, curators and art workers have made the pledge.

One of the key strategies for today’s artist-activists is creating visibility: calling attention to the often unseen and unnoted presence of Asian-American communities in cities and in the culture — to their labor and contributions, and to the violence acted upon them.

Countering invisibility is at the heart of a short film by Astria Suparak titled “Virtually Asian.” It splices together scenes from science fiction movies in which urban landscapes are filled with stereotypical “Asian” signifiers, but the characters are almost exclusively white. She worked on it during the coronavirus lockdown.

“The piece is part of a larger project examining 40 years of sci-fi films,” Suparak said, “and how white filmmakers envision a future that is inflected by Asian culture but devoid of actual Asian people.”

The project emerged, Suparak said, “out of an ongoing erasure and racism and violence, and how both in real life and in mainstream media our varied and unique cultures are carelessly misidentified and jumbled together.”

The newly appointed Public Artist in Residence, Amanda Phingbodhipakkiya, began to work with the New York City Commission on Human Rights last August. As soon as she was hired, Phingbodhipakkiya began strategizing a public art project that she would take to the subways to address the way Asian diasporic communities in the city go largely unnoticed.

“The commissioner and I went for a walk in Prospect Park,” she recalled. “I’m not sure she was looking to brainstorm that morning, but I hit the ground running. I felt like there was no time to waste, and our community couldn’t take being invisible any longer. It was something I approached with extreme urgency.”

The result of the collaboration is a poster series titled “I Still Believe in Our City” installed on bus shelters, subway stations and, in a spectacular fashion, on the side of the Barclays Center. The choice of transportation hubs was deliberate, the artist said, since so many bias attacks have occurred there. Phingbodhipakkiya has also made them freely downloadable on her website.

Featuring a range of Asian-Americans with captions like “I did not make you sick,” “We belong here,” and “I Am Not Your Scapegoat,” they were recently featured on the cover of Time and have been showing up frequently on protest signs at rallies since the Atlanta shootings.

Events over the past year have inspired some artists to begin to address themes of Asian-American identities in their work. Over the past year, Tam, who has long explored questions of masculinity in his video, sculpture, and photography, has turned toward questions of Asian-ness. His solo exhibition “Silent Spikes” — a reference to the immigrant Chinese laborers who built the transcontinental American railroads — is at the Queens Museum until June 23. In it, Tam connects stereotypes about the Asian male body with the image of the cowboy and its role in Westward expansion.

Paul Chan is an artist newly spurred to action. His work, while often overtly political, has never addressed Asian issues head on — until now. (Chan’s now-defunct publishing imprint, Badlands Unlimited, issued my book on art, race and protest in 2018.) As soon as he heard about the mass shootings in Atlanta, he produced a poster that reads “Anti-Asian=Anti-Murican.” The piece is part of his ongoing “New Proverbs” series, which parodies signs used by the Westboro Baptist Church that he characterizes as “arguably one of the pioneering Christian hate speech groups in America.”

“The murders were the boiling point for me,” Chan said. I couldn’t let the moment go by without manifesting my feelings into form.”

As artists begin standing up to anti-Asian hate, the question of how useful the term “Asian-American” is, given the range of experiences it’s meant to describe. “Anicka Yi has said this very clearly: ‘What does it mean to be Asian-American in the 21st century?’” says Margaret Liu Clinton, a curator and member of S.D.A., who talks about the desire to develop pan-Asian conversations among the widest possible swath of art workers.

“What continues to unfold is a shared awareness of how different our experiences are across gender, class, generation, immigration, and I think that’s actually what is exciting about this work right now.”

Aruna D’Souza is a writer and a co-curator of “Lorraine O’Grady: Both/And” at the Brooklyn Museum.