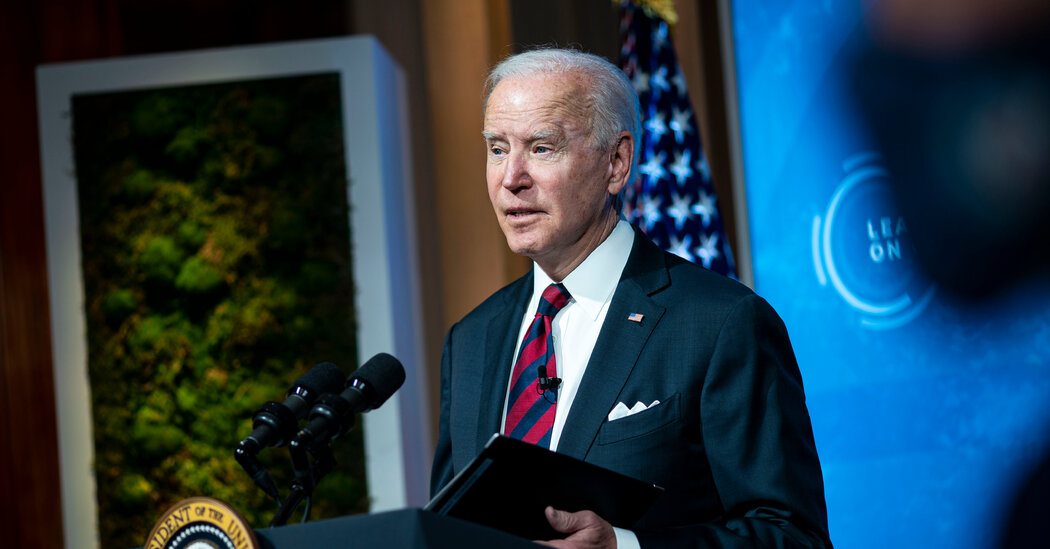 WASHINGTON — President Biden on Thursday moved to put four years of official climate denial behind the United States, declaring that America would cut its global warming emissions at least in half by the end of the decade.

Addressing 40 world leaders at the start of a two-day summit about the U.S. return to the Paris climate agreement, Mr. Biden sought to galvanize other countries to take more aggressive steps.

He cast the challenge of avoiding catastrophic warming as an economic opportunity for America and the world, a striking contrast to his predecessor who had abandoned the agreement. “This is a moral imperative, an economic imperative,” Mr. Biden said. “A moment of peril, but also a moment of extraordinary possibilities.”

In rapid succession, Japan, Canada, Britain and the European Union committed to steeper cuts. But China, India and Russia made no new emissions promises, and even Mr. Biden’s commitment to cut U.S. greenhouse gases 50 percent to 52 percent below 2005 levels by the end of the decade will be extraordinarily difficult to meet, economically and politically.

Energy experts said it would require a dramatic overhaul of American society, including the virtual elimination of coal for electricity and the replacement of millions of gasoline-powered cars with electric vehicles.

And the Biden administration’s ambitions cut to the heart of its toughest diplomatic challenge: Dealing with China. While the United States is the largest emitter in history, China’s emissions are currently the largest, which only add to the issues that have both Republicans and Democrats seething at Beijing.

Republicans immediately questioned why Americans should sacrifice when Chinese coal pollution is likely to swamp any gains from U.S. emissions cuts, at least in the near term.

Senator Mitch McConnell, the Republican leader, said Thursday that China has “shamelessly” kept emitting more. “Their share of greenhouse gas emissions are now nearly double that of the United States,” he said.

The stakes are enormous, for Mr. Biden and for the planet. If nations fail to keep global temperatures from rising more than 1.5 degrees Celsius above preindustrial levels, the world economy will suffer $23 trillion in losses by midcentury from natural disasters and the spread of disease, according to a report from Swiss Re, one of the world’s largest providers of insurance to other insurance companies.

American credibility has been battered by years of joining and then abandoning efforts to tackle climate change; if the United States does not meet its new goals, or if it reverses course once again with a new administration, trust from the international community would plunge still further.

The latest pledge puts the United States almost on par with Europe, but still behind Britain. The Biden administration also promised to double its contribution to help developing countries address climate change, to an estimated $5.7 billion by 2024. But, like many of Mr. Biden’s promises, that would require the approval of Congress. And even that level would only match what many other rich countries did years ago. Experts said the climate finance announcement was anything but ambitious.

That underscores a central fact: Mr. Biden’s promise is little more than that — a promise. Unlike pledges this week from the European Union and Britain, the U.S. target is not entrenched in law. Mr. Biden’s $2.3 trillion infrastructure plan, which includes the money and the policies to draw down carbon pollution, has not yet been translated into legislation much less found support from a divided Congress.

Mr. Biden is pushing the heads of his cabinet agencies to enact executive-branch climate change policies across the federal government, from new fuel economy standards for vehicles to rules limiting fossil fuel extraction on public lands to new financial regulations designed to curb Wall Street investment in heavily polluting industries. But those rules alone are unlikely to add up to the steep emissions reductions necessary to meet Mr. Biden’s ambitious new target. And, as the Trump administration showed, they could be undone by a future White House without much trouble.

John Kerry, Mr. Biden’s global climate envoy, said changes in the marketplace were happening so quickly that, he believes, the United States will not just meet but surpass its new goal.

“It’s not easy,” he allowed. “Is it doable? Yes. Will we probably exceed it? I expect yes.”

Republicans denounced the new emissions target as illegal and unrealistic. Patrick Morrisey, the attorney general of West Virginia, called it a “radical” plan and a “domestic and foreign policy blunder of almost unfathomable proportions.”

To overcome such domestic opposition, Mr. Biden will have to bring the world along, especially China. Several major industrialized nations did announce aggressive new goals at the summit.

Prime Minister Yoshihide Suga of Japan raised his country’s target for cutting emissions to 46 percent from 2013 levels by the end of the decade, up from 26 percent, and in a last-minute surprise said the country would “continue to try for an even higher cut” of 50 percent. The Biden administration had exerted strong pressure on Japan to announce a 50 percent goal.

Prime Minister Justin Trudeau of Canada raised his country’s goal to a cut of 40 percent to 45 percent from 2005 levels, up from 30 percent. President Moon Jae-in of South Korea announced an end to public finance for coal-fired power plants overseas. Even President Jair Bolsonaro of Brazil, an ally of former President Donald J. Trump who has denied the science of climate change in the past, vowed to end illegal deforestation by 2030 despite having overseen the sharpest rise in the destruction of the Amazon in 12 years.

President Xi Jinping did pledge that China would “strictly limit increasing coal consumption” in the next five years and phase it down in the following five years. That could prove significant, since China is, by far, the world’s largest coal consumer and is continuing to expand its fleet of coal-fired power plants. Coal is the dirtiest fossil fuel.

Mr. Xi also repeated his pledge from last year to draw down carbon emissions to net zero by 2060. In a pointed reminder to his host, he said that the industrialized countries had a responsibility to act faster to reduce emissions.

But the United States cannot tame climate change alone, Mr. Biden stressed. America accounts for about 15 percent of global emissions, a point made repeatedly by the president, Mr. Kerry and Secretary of State Antony J. Blinken.

“All of us, and particularly those of us that represent the world’s largest economies, we have to step up,” Mr. Biden said.

His new target and the summit drew expected approval from environmental groups who called the figure an aggressive but attainable target that would help America reach its long term goal of achieving carbon neutrality by 2050.

Former Vice President Al Gore called the target “a groundbreaking step for our country” and called the summit proof of America’s ability to galvanize other countries even after four years of Mr. Trump’s isolationist agenda.

“We are still in a period of history in which the United States remains the only nation that can provide effective leadership for the world community,” Mr. Gore said in an interview.

“Other countries may feel that period of history is over, but there is no substitute for U.S. leadership,” Mr. Gore added. “Even though our nation’s reputation in the world was damaged by the previous four years, perhaps especially on the climate issue, most nations will welcome the restoration of the traditional U.S. role.”

Notably, major fossil fuel industry associations like the American Petroleum Institute, as well as the Chamber of Commerce, praised Mr. Biden for re-engaging internationally on climate change and did not directly criticize the target or question the ability to reach it.

Some climate activists, particularly from poorer countries that have polluted the least but are suffering the worst consequences of climate change, said the United States was obligated to do far more.

“This summit is a major turning point that now shifts attention toward the laggards and concrete near-term actions,” said Mohamed Adow, director of Power Shift Africa, a research organization based in Nairobi, Kenya. Rich, polluting countries, he said, “need to come back with much stronger pledges, including climate finance for poorer nations.”

Thursday’s summit made history as one of the first all-digital gathering of world leaders, and the White House demonstrated that even it was not immune to the Zoom-induced glitches that have frustrated remote workers throughout the pandemic.

The opening speeches by Mr. Biden and Vice President Kamala Harris were plagued with painful echoes, evidently the result of overlapping microphone or speaker devices. The screen on whitehouse.gov then shifted to show Mr. Biden, sitting alone at a small conference table against a starkly-lit blue backdrop, as other world leaders beamed in.

Mr. Suga, the Japanese prime minister, acknowledged the realities of the global time differences by beginning his remarks to his fellow leaders with a cheery, “Good morning, good afternoon and good evening.”

As the speeches went on, Mr. Kerry joined Mr. Biden at the conference table to welcome other world leaders to the summit — although he said with a laugh to Mr. Biden, “If you can call it a summit.”

Douglas Brinkley, a presidential historian, said the inability of the United States government to solve basic computer glitches made him uneasy about its larger promises.

“It was amazing to see how bad the technology is and it makes you think, how are we going to solve climate change when you can’t even do video linkage for world leaders?” he said.

Despite the technical glitches, leaders expressed open relief at working with a United States administration that embraces science and again acts as part of the global community.

“The Paris Agreement is humanity’s life insurance,” said Ursula von der Leyen, head of the European Commission. “It is so good to have the U.S. back on our side.”