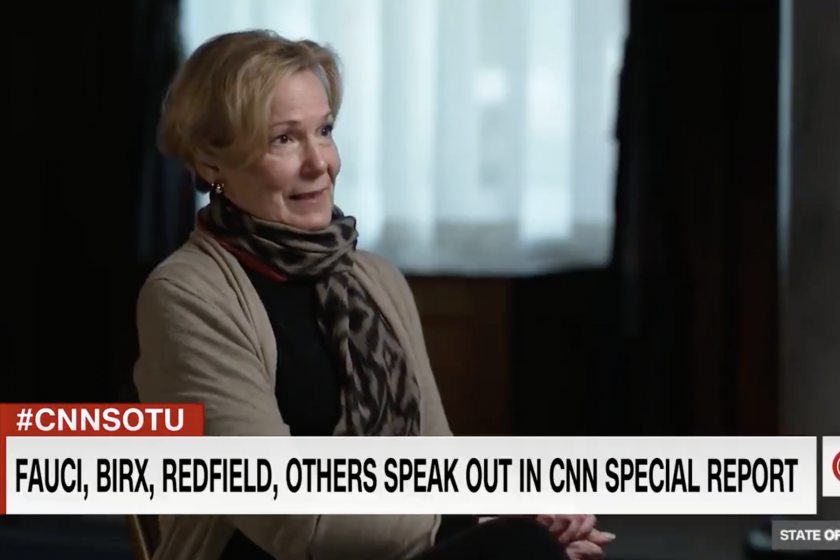 Senator Mike Braun (R., Ind.) on Saturday said a Biden official asked a group of Republican senators who visited the southern border to delete photos they had taken of the overcrowded conditions at a migrant processing and holding center they toured one day earlier in Donna, Texas. “There was one of Biden’s representatives. I felt sorry for the lady because she actually talked to me about deleting a picture, but by the time she got to me, all those other pictures were taken, and that shows you the hypocrisy,” Braun told the Washington Examiner. “None of us would have gone down there if we were going to be muzzled,” Braun said, adding that Border Patrol instructed them not to take photos, though “they were telling us that because they had to.” Braun visited the facility, which is at 700 percent capacity, with a group of 18 other Republican lawmakers. Photos reveal children sleeping on the ground on mats and migrants crowded into enclosed pods. The Indiana Republican told the paper that the group ran into so-called “coyotes,” who guide migrants across the border for money, during a stop at the edge of the Rio Grande with border agents. “All of a sudden to hear from the other side of the river taunting from the smugglers and coyotes, most of it in Spanish, telling the border guards that whatever you do, we’re coming,” Braun said. “That kind of hit home in such an anecdotal way because it is one story that kind of is a metaphor for what’s happening all up and down the border. After the visit, Braun wrote a letter to the president urging him to visit the border himself. “The crisis surrounding this surge makes it a moral imperative for you to see firsthand what is happening—and not the sanitized version of the border tour taken by some of my congressional colleagues,” Braun wrote. “Having personally gone this week, I can testify to this being an inhumane, unsustainable and dangerous situation. The lawmakers’ visit comes amid a worsening crisis at the border as officials struggle to keep up with an influx of migrants — especially unaccompanied minors — at the border. As of Thursday, there were more than 18,000 unaccompanied minors in Border Protection and Health and Human Services custody. The increase has caused delays at processing centers that are required, by law, to transfer children to HHS shelters in under 72 hours.