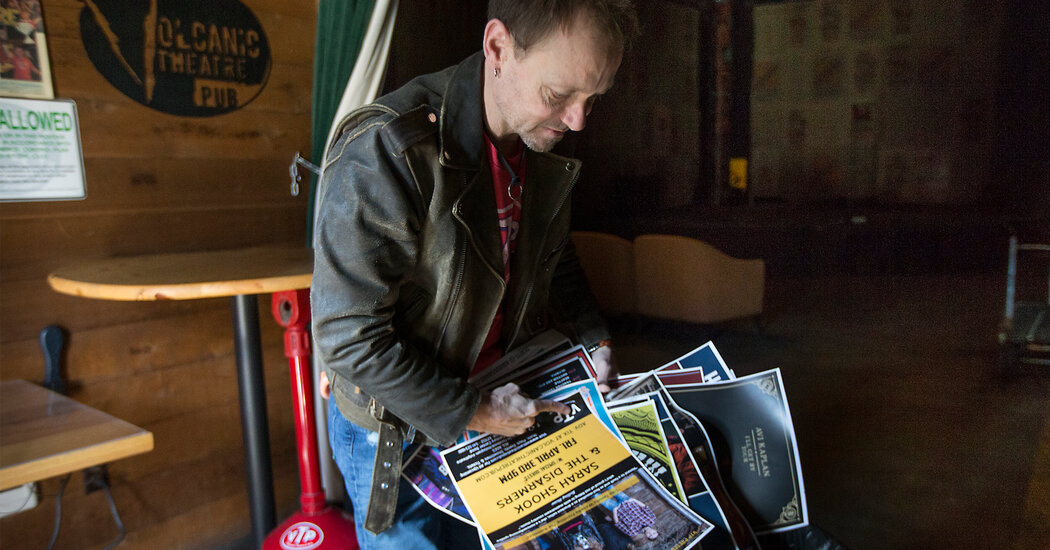 As the emails finally started arriving late last week, some business owners got the good news they had been long awaiting: They would be awarded a piece of a $16 billion federal grant fund intended to preserve music clubs, theaters and other live-event businesses devastated by the pandemic.

But other applicants ran into fresh obstacles — including the discovery that the government thinks they’re dead. It was the latest bureaucratic mishap for the Shuttered Venue Operators Grant initiative, an aid program created by Congress late last year that has struggled at nearly every turn to disburse badly needed relief funds.

Derek Sitter, the owner of the Volcanic Theater Pub, a 250-capacity music and performance venue in Bend, Ore., was at home on Saturday watching a British soccer game when an alert popped up on his phone: “Congratulations,” ran the subject line of an email from the Small Business Administration, which manages the grant program.

Mr. Sitter ran outside to tell his wife and daughter the news, with tears swelling in his eyes. “My heart rate increased,” he recalled in an interview. “But it was a good increase.”

The Volcanic was awarded about $140,000, Mr. Sitter said, though the funds have not yet arrived. (The size of the grant is pegged at 45 percent of a venue’s gross revenue from 2019.) Just how many venues have learned that their applications have been approved is unclear, but members of the network of small venues — which became a tightly connected hive during the pandemic — say they have heard of only a few so far. The Small Business Administration has not released details on how many claims it has approved.

Other applicants got grimmer news. Bob Hansan, the managing partner of Bobby McKey’s, a piano bar near Washington, received a cryptic email Tuesday afternoon that began: “Your name appears on the Do Not Pay list with the Match Source DMF.”

A few minutes of frantic Googling revealed that was a reference to the government’s Death Master File, a record of more than 83 million people whose deaths have been reported to the Social Security Administration.

Mr. Hansan immediately called Social Security’s headquarters, which referred him to his local office, which told Mr. Hansan that they could find no record of his name anywhere on the death list. The office agreed to send him a form affirming that he’s alive, but the document can only be sent by mail, he was told — a process he worries will be slow.

“It’s this continual drip-drop of delays,” he said.

Michael Swier, the founder of the Bowery Ballroom and the Mercury Lounge in New York — and a prominent figure in the independent music world — also received notification early Wednesday that he was considered dead, and said that he was beside himself trying to understand how to correct the error.

Representatives of the Small Business Administration did not answer questions about the erroneous death data.

The glitches were the latest to bedevil the program, which has suffered many delays, including a complete failure of its online system on the day it tried to start taking applications. (The application system finally opened in late April.)

Some 13,000 people applied, seeking a total of $11 billion. The Small Business Administration has not yet released details on how many it has approved.

In Facebook groups and on Twitter, frantic business owners have been swapping tips and trying to glean where in the application process their own claim might be.

Some venues are beginning to get good news.

Hugh Hallinan, the executive producer of Downtown Cabaret Theater, a nonprofit venue in Bridgeport, Conn., spent weeks checking the S.B.A.’s grant portal each day, and last Thursday learned that his theater had been approved for a $541,000 grant.

On Tuesday the theater held a news conference with Senator Richard Blumenthal of Connecticut.

“We’ve been in Bridgeport for 41 years, and we’ve never gotten recognition like this,” Mr. Hallinan said in an interview. “I just thought, ‘We’re going to soak it all up right now. We’re going to bask in it.’”

“If all patrons who had tickets called in and said, ‘I need a refund,’ it was game-over time,” Mr. Hallinan said. Instead, many opted for a credit on their account, and about a third of donated the cost of their tickets back to the venue, Mr. Hallinan said.

The funding has not yet started flowing to Broadway. A spokeswoman for the Broadway League, a trade organization representing producers and theater owners, said that none of its members had notified the group about receiving application approvals. Charlotte St. Martin, the group’s president, had said last month that officials had told the group that money would start coming in by the end of May, but that deadline has now passed.

And several major performing arts organizations in New York City that are planning summer or fall reopenings are also still waiting. Carnegie Hall, the New York Philharmonic, New York City Ballet, American Ballet Theater, the Public Theater and the Metropolitan Opera have not yet heard. Many will not be eligible until a later round of awards.

Mr. Sitter, in Oregon, said he had no idea why the Volcanic got its award so early. Like many applicants, it had lost at least 90 percent of its revenue during the pandemic, which qualified the Volcanic for the first round of grants. Others who lost less will be eligible for awards in mid- to late June.

The Volcanic received some federal money last year from an earlier round of federal pandemic relief. That got it through 2020, Mr. Sitter said. But by last month, the Volcanic was down to its last few thousand dollars, not enough to cover its rent and monthly bills for June, Mr. Sitter said. He was considering whether to sell or shut it down.

With the shuttered venue grant, the Volcanic can stay open until next year, when Mr. Sitter expects its pipeline of shows to be back to normal. This weekend, it is planning to put on its first shows since last summer, at 50 percent capacity.

“There’s certainly not a lot of profit going to be made here,” Mr. Sitter said. “This is simply to lift the spirits of people, to say, ‘We can kind of do this, we’re doing good, and there is a way out.’”