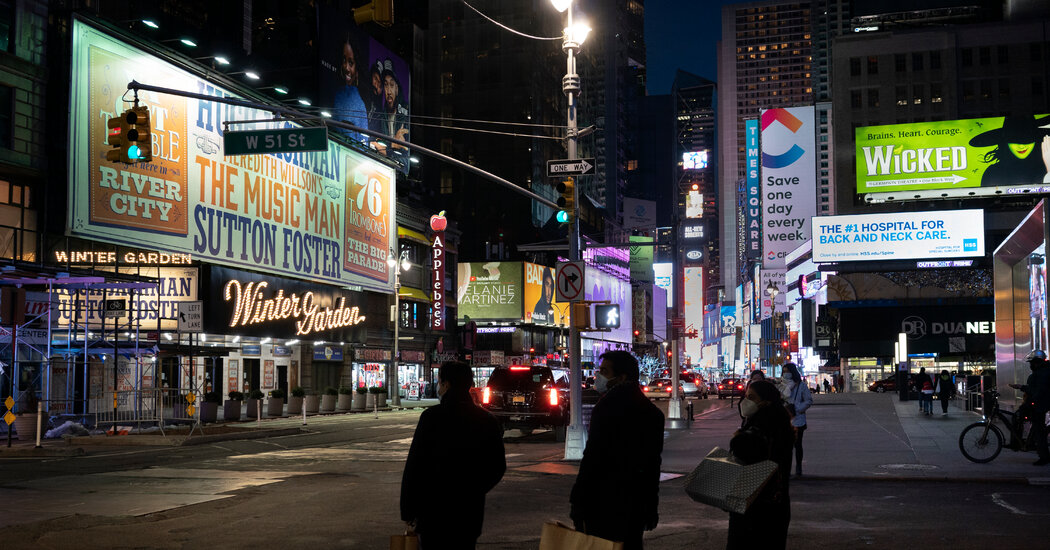 Gov. Andrew M. Cuomo says that most pandemic capacity restrictions will ease in two weeks. Mayor Bill de Blasio says he wants the city to fully reopen on July 1. But Broadway, a beacon for tourists and an engine for the economy, is not quite ready to turn on the stage lights.

Most shows are not planning performances until September or later. But there are signs of life: Mr. Cuomo said Wednesday that Broadway shows would start selling tickets for full-capacity shows with some performances starting Sept. 14.

Why the four-month wait? With as many as eight shows a week to fill, and the tourists who make up an important part of their customer base yet to return, producers need time to advertise and market. They need to reassemble and rehearse casts who have been out of work for more than a year. And they need to sort out and negotiate safety protocols.

But the biggest reason is more gut-based: individually and collectively, they are trying to imagine when large numbers of people are likely to feel comfortable traveling to Times Square, funneling through cramped lobbies and walking down narrow aisles to sit shoulder-to-shoulder with strangers. Most Broadway shows lose money even in the best of times, so producers say there is no way they can afford to reopen with social distancing, given the industry’s high labor and real estate costs.

“We’ve never done this before,” said Victoria Bailey, executive director of TDF, the nonprofit which oversees the TKTS ticket-selling booth in Times Square. “The last time the theater industry opened from a pandemic, Shakespeare was still writing new plays.”

Broadway, home to 41 theaters, drew 14.6 million people who spent $1.8 billion on tickets in 2019. The coronavirus pandemic forced them all to close March 12, 2020, and reopening is clearly going to be far more complicated than shutting down. One of the biggest challenges the industry faces is the dearth of tourists, who made up roughly two-thirds of the Broadway audience before the pandemic struck.

“We had such a good year before the shutdown, but now we need the ability to reignite the energy that we were sailing on,” said Tom Hulce, a lead producer of “Ain’t Too Proud,” a jukebox musical about the Temptations. “We basically are starting from zero advance, as most shows are, and now we need time to reach out and build back up.”

About 30 shows are currently planning to begin performances on Broadway before the end of 2021 — approximately half starting in September, and the rest spread out across the year’s final quarter.

Among the first to go on sale following the governor’s announcement: “The Phantom of the Opera,” Broadway’s longest-running show, which said Wednesday evening that it would put tickets on sale Friday in anticipation of resuming performances Oct. 22. “Emphatically: Yes, we are coming back,” said the show’s composer, Andrew Lloyd Webber.

The three juggernaut musicals that were the biggest box office grossers before the pandemic — “Hamilton,” “The Lion King” and “Wicked” — have been planning to jointly announce next week that they expect to reopen in mid-September. Those shows, with their well-known titles and fervent fans, face lower hurdles than others in reintroducing themselves to potential ticket buyers, and they are also the most able to withstand financial risk.

A number of other musicals are also hoping to open in September, including the long running “Chicago,” the David Byrne concert show “American Utopia,” Disney’s “Aladdin” and the inspirational Canadian hit “Come From Away.” Each is confident they can find an audience even as some forecasts suggest that it could be several years before tourism fully recovers.

“I do think there’s going to be a real push to reach out to the tristate area, to day-trippers, and to locals,” said Sue Frost, a lead producer of “Come From Away.” “But does the pent-up demand explode and then go dormant? If we don’t put our toe in the water, we won’t know.”

There remain many uncertainties. Will masks be required for patrons? (Probably, at least at first.) Will performers sign autographs at the stage door? (Probably not, at least for a while.) Will vaccinations be required? (Governor Cuomo said he would prefer that, but said it would be up to the theater industry to decide. “Are you willing to go into an indoor theater and sit there for two hours next to a person who you don’t know if they are vaccinated or unvaccinated?” he asked. And “Phantom,” in its announcement, said protocols could require vaccination or negative test verification.)

Even the frequency of performances is still to be determined. The Broadway League and several labor unions have been talking about the possibility of opening with fewer than the customary eight shows a week. That would mean lower pay for cast and crew, a concession they are likely to consider only if theater owners take the same percentage cut in rent.

Pricing practices are expected to be fluid. Several producers said they expect to start selling tickets at prices similar to those in place before the pandemic, but that they could adjust depending on what demand looks like. One change that seems certain in the post-pandemic era: more liberal refund policies. (“Phantom,” for example, said all tickets could be refunded or exchanged until two hours before a performance.)

“There’s never been a time when all the tickets have basically gone on sale at once, so there’s going to be a lot of learning,” said Brian Fenty, the chief executive of TodayTix, which runs a popular ticket-selling app.

Every show faces casting complications, because most, if not all, contracts with actors have expired and will need to be renegotiated. Some performers need to recondition their bodies or their voices. Some are dealing with lingering effects of Covid. Some ensemble members may decide that life in, say, Nebraska is actually better than life in New York. Some child actors — and there are children in the casts of a half-dozen shows — have aged out of their roles. Elizabeth Stanley, a star of “Jagged Little Pill,” is pregnant. And Karen Olivo, whose character is central to “Moulin Rouge!,” issued a critique of Broadway’s priorities and the industry’s lack of response to abusive behavior and said she would not return.

Broadway has been rocked not only by the pandemic, but also by the unrest over racial inequity that coursed through the country last year after George Floyd and Breonna Taylor were killed by police.

All of the new plays announced for Broadway this fall are by Black writers. Two are commercial productions — Keenan Scott II’s “Thoughts of a Colored Man,” about a single day in the life of seven Black men in Brooklyn, and Antoinette Chinonye Nwandu’s “Pass Over,” about two Black men trapped by existential dread in a society where too many Black people are killed by police.

“We are leaning in to the conversation that’s happening in America,” said Brian Moreland, a lead producer of “Thoughts of a Colored Man,” which is aiming to open in October.

There will also be three nonprofit productions of plays by Black writers on Broadway: “Clyde’s,” a new play by Lynn Nottage presented by Second Stage; “Lackawanna Blues,” a one-man show by Ruben Santiago-Hudson presented by the Manhattan Theater Club; and “Trouble in Mind,” a classic play by Alice Childress getting its first Broadway production via the Roundabout Theater Company.

“It’s been a really hard year for the not-for-profits — we’re all suffering, and we all have deficits,” said Carole Rothman, the artistic director of Second Stage, who said she hopes to start performances of “Clyde’s” in November, after opening her smaller Off Broadway stage a little earlier. “I’m an optimist,” she said. “Definitely there’s going to be an audience chomping at the bit to see theater.”

A handful of shows are not expected to return until 2022. The most prominent among them is the two-part play, “Harry Potter and the Cursed Child,” which is rethinking its length and structure before deciding how and when to reopen. And plans for a pair of shows produced by Scott Rudin, “To Kill a Mockingbird” and a revival of “West Side Story,” are unclear following his decision to step back from active involvement after a series of news reports detailed his bullying behavior toward employees and collaborators.

Expect at least four new Broadway musicals to open this fall, including “Six,” the concert-style British pop show about the ill-fated wives of King Henry VIII, which was just 90 minutes from opening when theaters closed, as well as “Mrs. Doubtfire,” “Diana” and “Flying Over Sunset.” And a fifth new musical — “MJ,” about a chapter in the life of Michael Jackson — is planning to start performances late this year.

The lead producer of “Phantom,” Cameron Mackintosh, said the return of theater is essential for the cultural and economic life of both New York and London, but acknowledged that much is unknown.

“No one is taking this for granted, and no one is assuming we’re going back to what it was pre-Covid,” he said. “We need to be completely optimistic, but also pragmatic, because none of us have been in this situation before.”