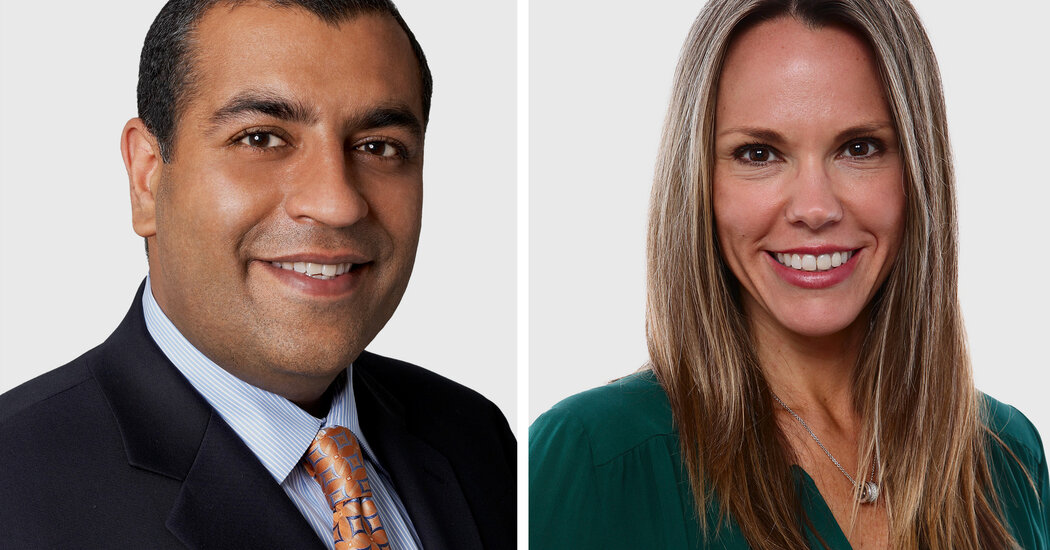 Two years ago, CBS picked the ultimate insider to run its broadcast news division: Susan Zirinsky, whose decades-long tenure at the network stretched to the days of Walter Cronkite.

Now the network is turning to a pair of outsiders — one from the world of newspapers and digital publishing — to restore the fortunes of a news operation that trails its rivals at ABC and NBC.

CBS said on Thursday that Neeraj Khemlani, a vice president at the publishing powerhouse Hearst, and Wendy McMahon, a former ABC executive, would succeed Ms. Zirinsky. The two will serve as presidents and co-heads of CBS News, a division that will be expanded to include local stations owned by the network.

In the gossipy world of TV news, neither executive had been rumored to be a candidate for the top CBS role.

Mr. Khemlani worked at CBS News from 1998 to 2006 as a producer at “60 Minutes.” He left to work at the news arm of Yahoo before taking on a series of executive roles at Hearst starting in 2009.

Like CBS, Hearst is a giant of last century’s media empires, and Mr. Khemlani’s tenure there included digital partnerships and other efforts to modernize the company. Ms. McMahon is more steeped in the broadcast news business; in her most recent role, she oversaw local stations and newsrooms owned by ABC.

The announcement on Thursday surprised many members of the CBS News staff. George Cheeks, the chief executive of the CBS Entertainment Group, who steered the dual appointment, made clear in a memo on Thursday that he was seeking something of a shake-up.

“This is an opportunity to create a news and information structure that positions CBS for the future,” he wrote.

The two incoming executives are a contrast with Ms. Zirinsky, a veteran producer. The first woman to run CBS News, she installed a new evening news anchor, Norah O’Donnell; signed the morning host Gayle King to a new contract; and urged her team to chase scoops. Ratings did not shrink too much during her tenure, but they did not grow much, either: CBS is still ranked third in the morning and evening news hours.

Ms. Zirinsky is expected to take on a new production role at the network this year. Mr. Khemlani and Ms. McMahon start next month.

“I don’t think CBS News needs help with journalism,” said Mr. Heyward, who is now a professor at Arizona State University’s Walter Cronkite School of Journalism and Mass Communication. “CBS will benefit from fresh thinking in how to reinvent itself for a new generation of news consumers with a new set of consumption habits.”

Mr. Cheeks, who ascended to his role overseeing CBS’s entertainment group in March 2020, is putting his first big stamp on a vaunted news operation. He is also seeking to address a scandal that recently hit the CBS TV station group. Two top executives there, Peter Dunn and David Friend, were placed on administrative leave in January after accusations that they had created a hostile work environment and made disparaging remarks to Black and female colleagues. Both were fired last week.

Journalists and producers at CBS News will now report to a pair of leaders on both coasts. Mr. Khemlani will be based in New York, where the news division’s headquarters are, and Ms. McMahon will be based in Los Angeles, though she is expected to work out of both cities, a CBS spokesman said.

Mr. Cheeks is a believer in splitting top positions between executives, and he has firsthand experience with that arrangement. In early 2018, he was appointed co-president of Universal Cable Productions with Dawn Olmstead, and later that year he was named co-chairman of NBC Entertainment with Paul Telegdy.