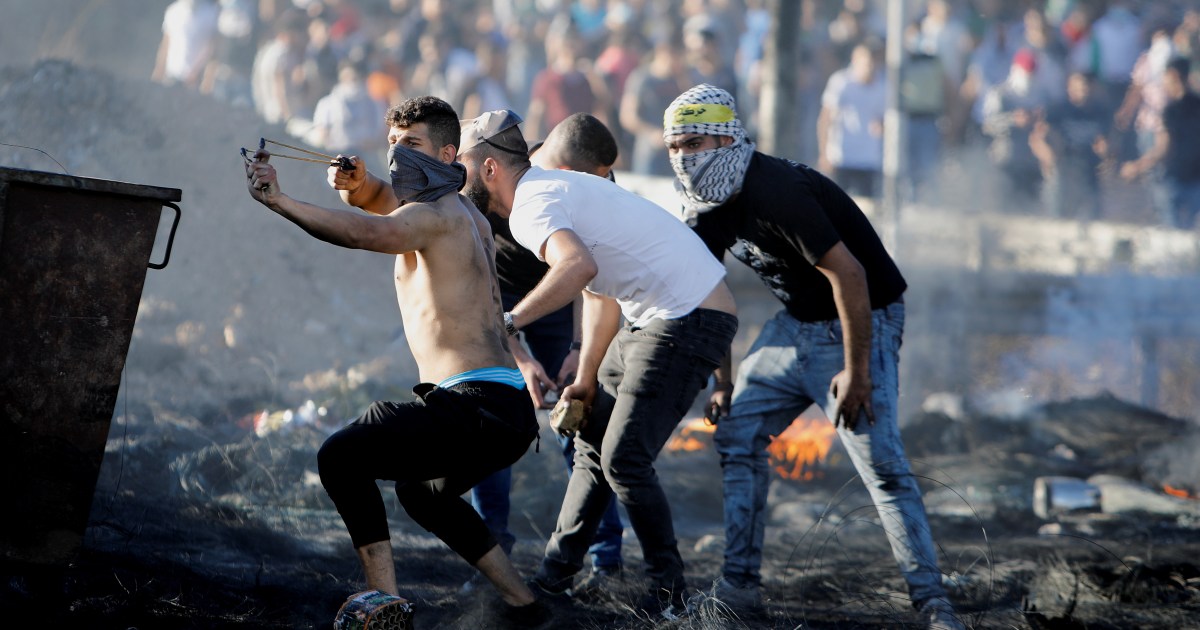 Israeli war planes continued to pummel the Gaza Strip in the early hours of Wednesday, according to local media, flattening residential buildings and killing at least three Palestinians.

The latest raids came hours after Israeli forces shot dead four other Palestinians and wounded scores more during protests and a historic general strike in the occupied West Bank and East Jerusalem.

The strike was called in solidarity with the Palestinians under Israeli bombardment in Gaza.

At least 220 Palestinians, including 63 children, have been killed in Gaza since the latest violence flared on May 10. About 1,500 Palestinians have been wounded.

Twelve people in Israel have died, including two children, while at least 300 Israelis have been wounded.

Despite the escalating violence – now in its tenth day – diplomatic efforts for a ceasefire between Israel and Gaza’s ruling Hamas have failed to make much headway.

The United States continued to block the UN Security Council from issuing a joint statement urging an end to the hostilities, telling diplomats that a public statement would not help calm the tensions.

France, however, said it was working with Israel’s neighbours, Egypt and Jordan, on a new ceasefire resolution.

China said it was “supportive” of the French proposal.

Here are the latest updates:

Israel continued to bomb the Gaza Strip as dawn approached on Wednesday, according to local media reports, hitting a residential building in central Gaza City and killing at least three Palestinians.

Three others were also wounded, the Wafa news agency said.

This morning in Gaza pic.twitter.com/Xqyzvxv0FX

An AFP photographer reported streaks of light in the sky late on Tuesday as Israel’s air defence system intercepted the rockets.

Antonio Guterres, secretary-general of the United Nations, called on the international community to ensure adequate funding for the global body’s humanitarian operations in Gaza.

“We are seeing immense human suffering and extensive damage to homes and vital infrastructure in Gaza,” he said in a tweet.

We are seeing immense human suffering and extensive damage to homes and vital infrastructure in Gaza.

I call on the international community to ensure adequate funding for our humanitarian operations in Gaza. https://t.co/lbKUIbhulU

“The crossings with Gaza need to be opened and to remain as such for the entrance of essential and humanitarian supplies, including fuel for basic services and supplies to curb the spread of COVID-19,” he said in a statement.

I’m deeply concerned by the ongoing hostilities between the occupied Palestinian territory and Israel.

In order to support civilians caught in the crisis, we need adequate funding for the response and unimpeded humanitarian access.

Hundreds of protesters gathered across the street from the Israeli Consulate in the US city of New York, denouncing Israel’s continuing bombardment of Gaza.

Today, NYC turned up for Palestine as part of a global solidarity campaign in support of the general strike being waged by Palestinians. We will keep fighting until Palestinians are liberated and Palestine is free. (This is only part of the march – cops kicked us off the bridge.) pic.twitter.com/yY8KVVYuDU

Rallies in support of Palestine were also held in Boston and Los Angeles.

For all the developments from Tuesday, May 18, go here.