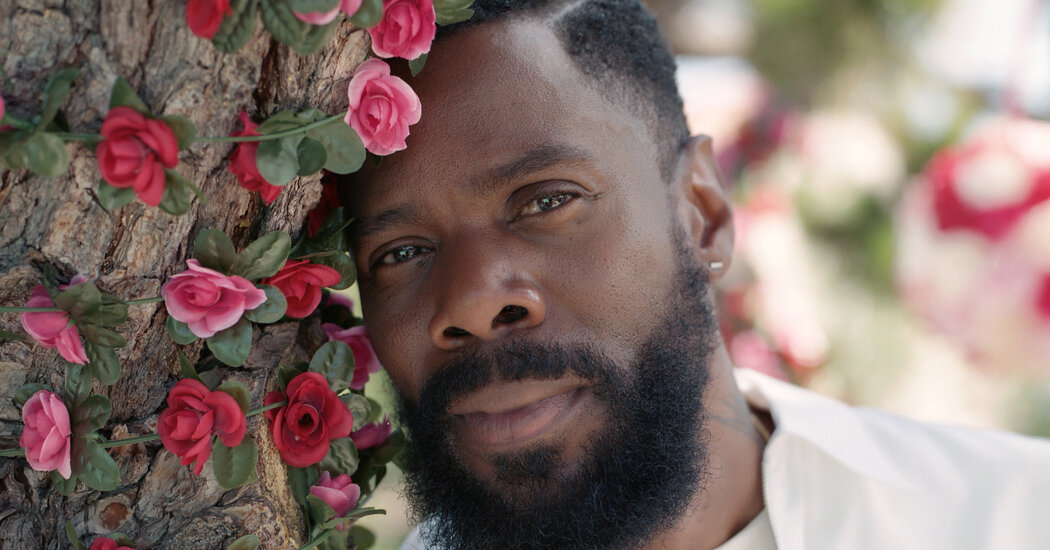 Colman Domingo — actor, playwright, dramaturge, producer, professor and the fella who showed up to this year’s Oscars in a hot pink sequined Versace suit — is likely best known for his character of Victor on television’s “Fear the Walking Dead.” He’s also brought a sensitive soulfulness to the array of characters he’s portrayed in some of the past decade’s most prominent Black films: “The Butler,” “Selma,” “42,” “The Birth of a Nation,” “If Beale Street Could Talk” and “Ma Rainey’s Black Bottom.”

Movie audiences will see another side of Domingo in two of this summer’s most anticipated films: as a neighborhood old-timer in “Candyman,” a horror sequel directed by Nia DaCosta; and as a pimp named X in the indie film “Zola,” directed by Janicza Bravo and based on a viral tweet thread about two strippers on a madcap road trip.

Chatting (via Zoom) in natty workout clothes from his Los Angeles home, he talked about how Hollywood is grappling with the country’s racial reckoning, even in seemingly small but crucial ways, and why he’s OK with speaking for the Black experience. These are edited excerpts from the conversation.

Jordan Peele is one of the screenwriters of “Candyman.” Had you worked with him before?

I had not. We had a general meeting the day after he won the Oscar. Literally the day after. I thought — clearly he’s going to cancel this appointment ‘cause, I don’t know, he’s been out all night, doing what people do after the Oscars. It was a 10 a.m. meeting. Jordan came down, we talked for 45 minutes and became fast friends. He wrote the character for me.

Am I freaking you out now, Cara?

Your characters always bring this wise soulfulness — and then there’s this guy. Then there’s X.

I read the first three pages of the script and I thought ‘Whoa, I’ve never read anything like this.’ It was so sharp, it was so dark, but it was so honest. Janicza pursued me. I’m coming off “If Beale Street Could Talk,” [and playing] other wonderful loving men who love their daughters, and who really elevate women. I’m like ‘What? What did she see in me?’ Because it plays to the darkest parts of ourselves. And I thought, because I’m such a staunch feminist, it makes even more sense to deconstruct and look into the psyche of a man who would traffic women.

He is based on a real guy, an immigrant appropriating American colloquialisms. This is going to sound really weird — I have to take it from the point of view of it being an immigrant story for my character. He found out what he can use for commerce, which is terrible and terrifying, but he found his way, and he wanted what everyone wants. People who don’t know me from stage work don’t know I always played dark characters and villains.

What was that like for you, going back to dark characters?

It was awesome. I seem to work very well with women because I think that they’re not afraid of my strengths, and where I like to go, and then they can help guide it.

“Ma Rainey” was another deep immersion. We’re seeing more films in the mainstream about Black lives, but it also makes you realize the paucity of films like these before.

I feel like that’s why I’m a bit more useful now in the film space. People call on me, not only just to use my voice as an actor, but they want to hear what I have to say as a dramaturge.

Is something finally shifting in Hollywood?

I think that’s the truth. I’ve been reached out to as a writer so much — for Broadway musicals, for you name it. We’ve been right here and waiting and doing our own work and creating our own universes and now — now we’re being invited in. I remember I came back for Season 7 of “Fear the Walking Dead,” and I finally saw a Black base camp production assistant. And these lovely white women who take care of me — they made strides over the hiatus to get training for my hair. And my hair and my makeup artist went and visited with this guy in Houston to learn how to take care of my beard.

Until then was it a disaster?

It wasn’t a disaster but it was just kind of like, oh, an experiment. Or people would look at my hair when I’d get to a set and just say, “Oh you’re good.” That was a practice that went on for many years in our industry. And to be honest, I realize the silence was being complicit. Because I would show up with my own kit, and I would just go into my dressing room and take care of it. Most actors did that. But then you’re, like, doing extra work.

I was wondering how last year’s racial reckoning would reverberate in Hollywood, especially since we’re spending more time than ever on screens. Everything we see is going to affect us.

Absolutely, which is why I’ve been a proponent of saying I’m really a little exhausted with stories that are focused on Black trauma. That perpetuates a narrative — that’s the only way that the world sees us, as being abused and victimized. I love what Nia DaCosta has done in “Candyman,” which is that you never see any of the trauma onscreen. You never see a Black body being brutalized.

Right, I noticed that it was only white people.

I think it was very conscious. And also with “Zola,” where the character you think would be the ratchet character is actually the white girl who is appropriating Black culture — a certain window of Black culture, of street ghetto culture. And the Black girl is more suburban and just like, ‘I’m just trying to go and strip and you’re doing all this and you’re doing the most, sis.’ I think it’s really saying something about who we are. And actually I feel like it was such a smart thing for [the film’s release] to be jettisoned to this summer. After that terrific, terrible summer of racial reckoning, I think we want to go out and see ourselves anew, and laugh at some of our [stuff.]

Going back to “Ma Rainey” — did you know Chadwick Boseman was sick?

I didn’t at all. Whatever pain he was going through, I didn’t know until after. It was some superhuman strength. I mean I was exhausted — and I was very healthy.

“Black Panther” shifted the world. It was losing a bit of a superhero in a way.

Truly, and especially right after the whole awards season, you take a breath and regroup and ask, ‘What did you learn from this, what was your purpose?’ Which is why I teach on the side. Because there’s something about speaking for others, being in service in this industry, that I think I’ve been called on to do.

How do you mean?

A student told me, “There’s no one who has been consistently in the most impactful Black films in the past 15 years more than you.” And I was like, he was right. Apparently I can’t just take a job and just go sit down somewhere. I have to speak out on it, and our experience. That’s something I’m OK with now. It took me a long time.

That makes sense in a way. You’re part owner of a bar. You’re hosting “Bottomless Brunch” (on AMC). You’re kind of the “I’m going to bring you all together” guy.

I think you’re right. I just hosted “Oscars After Dark.” And that came out of nowhere. It makes sense because I do believe that I’m in service. It requires you to show up, and engage in conversations with fellow artists about representation. There are things I’m interested in. Elevating our visibility. The way I speak, the way I dress-— all of that is conscious. It’s all doing the work that predecessors like Nat King Cole or Sammy Davis Jr. or Harry Belafonte or even Sidney Poitier — all they’ve done to move the needle on who we are. To show Black men in a different light. So I’m very conscious of that.

[By follow-up email] I forgot to ask you perhaps the most important question of all. Have you looked in the mirror and said “Candyman” five times — just for the heck of it?

HA-HA. I have not and I never will.