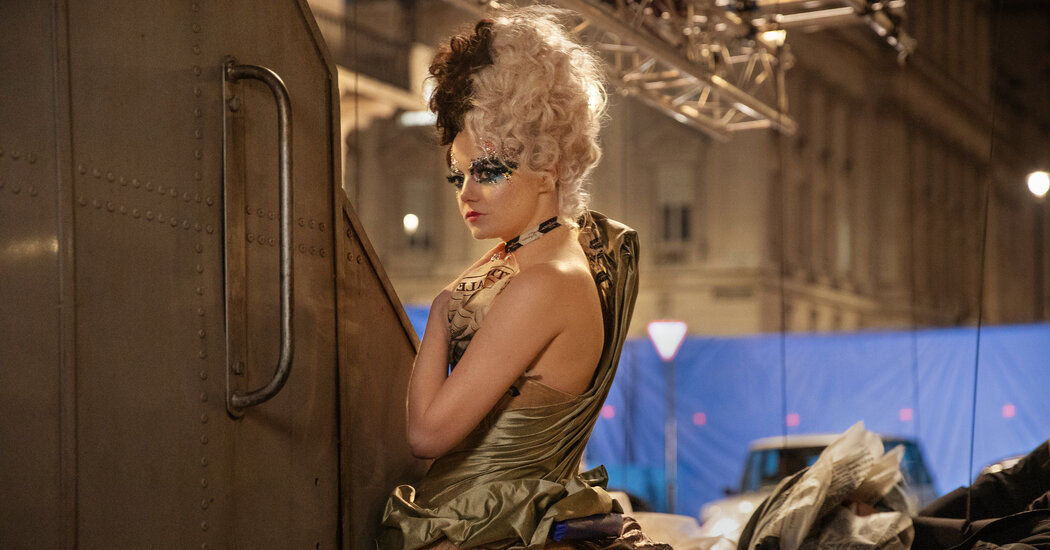 Sure, Emma Stone can give you yearning. But isn’t it more fun to do a little scheming instead?

Since her Oscar win four years ago for the winsome romantic musical “La La Land,” the 32-year-old Stone has gravitated to walks on the wild side. “The Favourite” proved she can play avarice as brightly as innocence, and now Stone’s budding penchant for villainy gets a full-blown showcase in “Cruella” (opening Friday), which imagines a live-action origin story for the animated foe from Disney’s “101 Dalmatians.”

“I loved the character of Cruella — I don’t mean I love the things that drove her, because she’s obviously a very sick woman, but I found the character very interesting,” Stone said.

In this telling, Cruella de Vil hasn’t become a puppy poacher quite yet: Instead, we meet her as an orphan named Estella whose climb to the top of the British fashion industry — which is ruled over by a haughty designer known as the Baroness (Emma Thompson) — will require tapping into a dark alter ego she’s named Cruella.

The tale intersects with Stone’s own origin story in unexpected ways: To get ahead, Estella initially dyes her hair red, just as Stone, a natural blonde, once did to land her breakout role in “Superbad.” And Stone treats her public persona like an alter ego, too: “I compartmentalize a bit — even because my name is actually Emily, so when someone calls me Emma, it’s easy for me to know that it has to do with work.”

And while Stone eschews Cruella’s methods, she could at least relate to the character’s ambition: In Stone’s own origin story, she put together a PowerPoint presentation to convince her parents she should pursue work as a teenage actress in Los Angeles. Has her career gone at all as she pitched it then?

“Oh my God, I never would have imagined it, or dared to think of this kind of situation,” she told me on a recent phone call. “All I wanted to do was play the daughter on a sitcom!”

These are edited excerpts from our conversation.

You were attached to “Cruella” for several years. What was it about this project that first enticed you?

I was in the middle of shooting “La La Land” when I first heard of “Cruella,” and it was so exciting to think about playing a quote-unquote villain because before that, the only role where I felt I had been kind of bad was when I played Sally Bowles in “Cabaret” [on Broadway], because she’s a drug addict and she’s making decisions that are kind of wild. She’s not like anyone I had ever accessed before.

That was really exciting, and I did other roles in the meantime like “Maniac” and “The Favourite” where these people knew what they wanted and they weren’t pretty about it. I’ve really loved this phase of playing these women who are much less concerned with what people think about them, and simultaneously working on that myself in my life. It’s definitely been a nice symbiotic relationship.

In the way that Cruella plots her rise from a lowly position of scrubbing washrooms, she reminded me of Abigail, the conniving 18th-century courtier you played in “The Favourite.”

Absolutely, but I do think there is something interesting to Abigail that Cruella doesn’t quite possess, which is that Abigail has this charm offensive: She plays the ingénue, in a way. I don’t see that in Cruella, and there’s something so freeing about it. Cruella just is who she is and she’s angry that she denied it for so long in order to survive.

Have you ever felt pressured to play the ingénue in your own life?

Beyond just being an actress, I think that’s probably a question for people who are socially adaptable: Are you someone who tries to make people laugh, or someone who sits back and observes? For me personally as Emily, my natural state is people-pleasing, wanting to laugh along and make people feel comfortable. I don’t even think it’s intentional — it’s just what my wiring is. But as you get older, you get more comfortable with not having to always put that on.

That’s part of the reason it’s interesting to be an actor, to look at characters who are putting that on and then ask yourself, “OK, what is it that makes me do this?” It’s not that it takes the place of therapy — I would rather go to therapy than play a part — but over the last five years, I’ve been asking myself a lot of questions about that charm offensive or ingénue idea in my own life. How do I try to smooth things over when I don’t necessarily need to? And that has been helpful. Did that answer your question at all?

How do you make Cruella a character you root for while also preserving what’s sort of wicked about her?

She’s not sort of wicked, she’s the most wicked! We don’t quite get to a place where this woman is skinning puppies, but there is an exploration of what it means to be “bad” and what the difference is between that and being rebellious and thinking differently than everyone around you.

One of the ways she exults in that difference is through fashion.

Fashion is written off in some ways as frothy or frilly or not very important, but I think for a lot of people, it really is an act of self-expression that can make you feel more like yourself. There’s a real importance to getting dressed — and I don’t mean highfalutin couture fashion, I mean getting dressed every day.

As a character, I think Estella has felt that from the very beginning: That’s her mode of self-expression when she didn’t feel she was in control of her life. She changes who she is every time she gets dressed, and once I was stepping into that hair and that makeup and those clothes, that was the only way I could really feel like Cruella, because it feels pretty silly at your house to be working over and over on that Tallulah Bankhead laugh and voice without being fully Cruella.

When she faces off with the Baroness, Cruella chooses her look almost like she’s donning a suit of armor. When you get dressed up for the real-life gauntlet that is the red carpet, is there a similar sense of preparing for battle?

It’s so surreal, it’s not real life. The only time it ever feels fully comfortable is when I’m talking to you, where it feels like I’m talking as myself. When I’m on a red carpet, it’s like I’m on a set. It’s a wild experience, but I treat being dressed up in that way like an enjoyable aspect of work. Otherwise, you’d just take it too seriously and be miserable: “Oh God, I’m so scared, and everything’s so awful.” Pssh. You’re an actor on a red carpet. How annoying can you be? Things could be a lot worse than that!

One aspect of Cruella’s look that didn’t make the leap to live action was her iconic cigarette holder. Was that one of those things that doesn’t quite feel family-friendly anymore?

That is not allowed in 2021. [Laughs.] We are not allowed to smoke onscreen in a Disney film. It was difficult to not have that cigarette holder.

But did you feel, spiritually, that you were still brandishing a long cigarette holder?

Yes! I was so excited to have that green plume of smoke in there, but it was not possible. I don’t want to promote smoking, but I’m also not trying to promote skinning puppies.