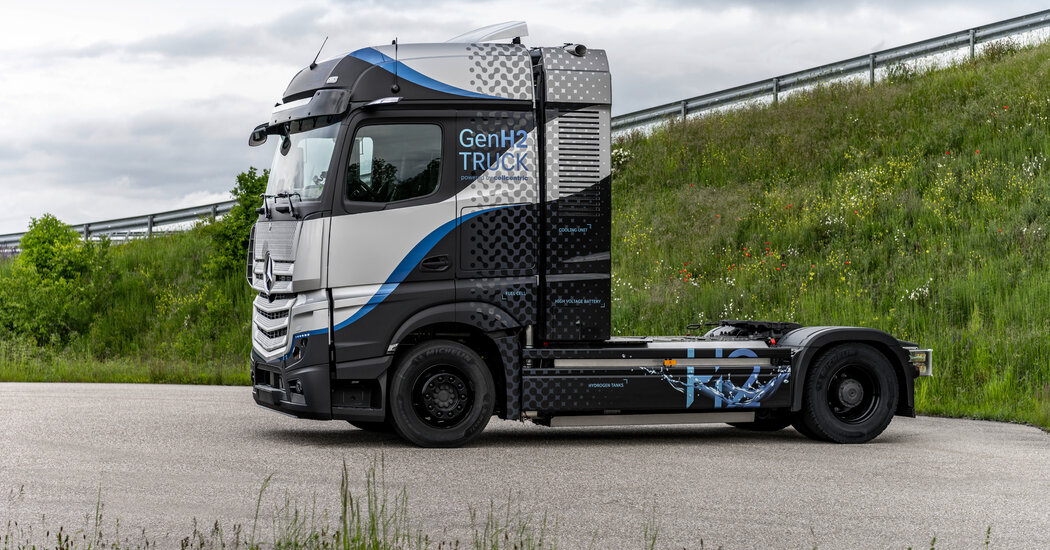 Carmakers have been promising to scrap the internal combustion engine, and now it’s the truckmakers’ turn. But the makers of giant 18-wheelers are taking a different route.

Daimler, the world’s largest maker of heavy trucks, whose Freightliners are a familiar sight on American interstates, said last week that it would convert to zero-emission vehicles within 15 years at the latest, providing another example of how the shift to electric power is reshaping vehicle manufacturing with significant implications for the climate, economic growth and jobs.

The journey away from fossil fuels will play out differently and take longer in the trucking industry than it will for passenger cars. For one thing, zero emission long-haul trucks are not yet available in large numbers.

And different technology may be needed to power the electric motors. Batteries work well for delivery vehicles and other short-haul trucks, which are already on the roads in significant numbers. But Daimler argues that battery power is not ideal for long-haul 18-wheelers, at least with current technology. The weight of the batteries alone subtracts too much from payload, an important consideration for cost-conscious trucking companies.

Instead, Daimler and some rivals are betting on fuel cells that generate electricity from hydrogen. Fuel cells produce no tailpipe emissions, and hydrogen fuel tanks can be refilled as fast as diesel tanks — a distinct advantage compared with batteries, which typically take at least twice as long to recharge.

In April, Daimler began testing a prototype “GenH2” long-haul truck capable of going 600 miles between visits to the hydrogen pump. But lots of work is needed to bring down the cost of the equipment and there is not yet a network of hydrogen fueling stations or an adequate supply of hydrogen produced in a way that does not cancel out the environmental benefits.

Last week Daimler provided details of how it plans to solve these problems, with the goal of selling hydrogen-fueled long-haul trucks by 2027 that will be cheaper to buy and operate than diesel models.

In March, Daimler and Volvo Trucks, which are usually intense rivals, formed a joint venture to develop fuel cell systems that will convert hydrogen to electricity to power long-distance trucks. The message is that the energy transition is too big even for a company the size of Daimler, with revenue last year of 154 billion euros, or $188 billion, to manage on its own.

Daimler has been working on hydrogen fuel cell technology for decades, but the technology is not yet cheap enough or rugged enough for commercial use.

“The fuel cells out there today are not at all fulfilling the demands that we have coming from our customers,” Lars Stenqvist, chief technology officer of Volvo Trucks (which is a separate company from Volvo Cars), said in an interview from company headquarters in Gothenburg, Sweden. “That’s one reason to join forces with Daimler, in order to share that development burden.”

Daimler, based in Stuttgart, is planning this year to split its truck- and bus-making operations from the division that makes Mercedes-Benz cars, forming a separate company with its own stock market listing. The spinoff of Daimler Truck, announced in February, is a momentous event for the company, which traces its roots to the inventors of the automobile and was once a sprawling conglomerate that manufactured airplanes and trains as well as autos.

One motivation for the amicable divorce is to give the truck unit more freedom to react to technological change, while raising money from investors to help finance the enormous cost of developing emission-free long-haul vehicles.

“Independent management and governance will allow them to operate even faster,” Ola Källenius, the chief executive of Daimler, said Thursday.

Daimler managers concede that some portions of its truck business are ailing. In the United States, Freightliner, which Daimler acquired in 1981, is the top selling brand of heavy truck, with more than one-third of the market. But in Europe, Mercedes-Benz brand trucks have lost market share and score behind rivals in customer satisfaction surveys.

Karin Radstrom, hired this year from rival Scania to fix the Daimler Truck business in Europe and Latin America, said the company put too much energy into fancy engineering that customers weren’t willing to pay for.

“To some extent we lost touch with our customers,” Ms. Radstrom said during the presentation Thursday.

As with passenger cars, the truck-making dinosaurs like Scania, a unit of Volkswagen, or Paccar, maker of Kenworth and Peterbilt trucks, face new competitors trying to exploit the transition to electric technology.

Nikola, a truck start-up based in Arizona, was briefly worth more than $20 billion on the stock market. But its shares have lost three-quarters of their value since the founder, Trevor Milton, resigned last year facing accusations he had made numerous false assertions about the company’s hydrogen fuel-cell technology.

Nikola at least demonstrated how eager investors are to put their money into hydrogen trucks. Another example is Hyzon, a maker of fuel cells based in Rochester, N.Y., that has begun offering complete trucks and buses. In February, Hyzon was acquired by Decarbonization Plus Acquisition Corporation, a so-called SPAC that raises money before it has any assets.

Tesla unveiled a design for a battery-powered semi truck in 2017, which the company has said it will begin delivering this year. Tesla, Scania and some other truckmakers are skeptical of hydrogen technology, which they regard as too expensive and less energy-efficient.

The traditional truckmakers like Daimler and Volvo have some advantages over the start-ups. Truck buyers tend to be practical hauling firms or drivers who carefully calculate the costs of maintenance and fuel consumption before they make a decision. Managers of big fleets may also be reluctant to take a chance on a manufacturer without a long track record.

“There is a lot more spreadsheet analysis and crossing the Ts before any orders are signed,” said Daniel Ives, a managing director at Wedbush Securities who follows the tech industry. “Daimler is in a massive position of strength.”

For trucking companies, it is a confusing time. They face pressure from regulators to reduce their impact on the climate before there is a big selection of emission-free vehicles to buy, said Glen Kedzie, energy and environmental counsel for the American Trucking Associations, an industry group. President Biden has been promoting electric vehicles, but has not yet defined what that means for the trucking industry.

Trucking companies, which have depended on diesel for most of the last century, will have to revamp their maintenance departments, install their own charging or hydrogen fueling stations in some cases, retrain drivers and learn to plan their routes around hydrogen or electric charging points.

But Mr. Kedzie said that emission-free trucks also had some advantages. Fuel costs for battery-powered vehicles are much lower than for diesel trucks. Maintenance costs may be lower because electric vehicles have fewer moving parts. Drivers like the way electric trucks perform — an important factor at the moment when there is a driver shortage in America.

Many companies that ship a lot of goods, like Walmart or Target, are trying to reduce their carbon footprints and taking an interest in zero-emission trucks. “There are a lot of potential benefits” Mr. Kedzie said.

Daimler says its aim is to make battery-powered short-haul trucks that can compete on cost with diesel by 2025, and long-haul fuel-cell trucks that achieve diesel parity by 2027.

“In that very moment when the customer starts benefiting more from a zero-emission truck than a diesel truck, well, there’s no reason to buy a diesel truck anymore,” Andreas Gorbach, chief technology officer for Daimler’s trucks and buses division, said during the presentation Thursday. “This is the tipping point.”