March 1977, Australia v England in the Centenary Test, the MCG overdosing on testosterone. Dennis Lillee is tearing in and 100,000 fans are roaring him on. Even now, the chant remains fresh in the mind of Dennis Amiss. ‘Kill! Kill! Kill!’

Amiss had rarely done well against Australia. His Test debut against them at Old Trafford in 1968 brought him a pair. Then, during England’s infamous 4-1 drubbing Down Under in 1974-75, he made three ducks in a row. At Lord’s soon after, he made another. Lillee scented blood.

The crowd sniffed it too. ‘Kill! Kill! Kill! Come on Lillee — kill Amiss!’ 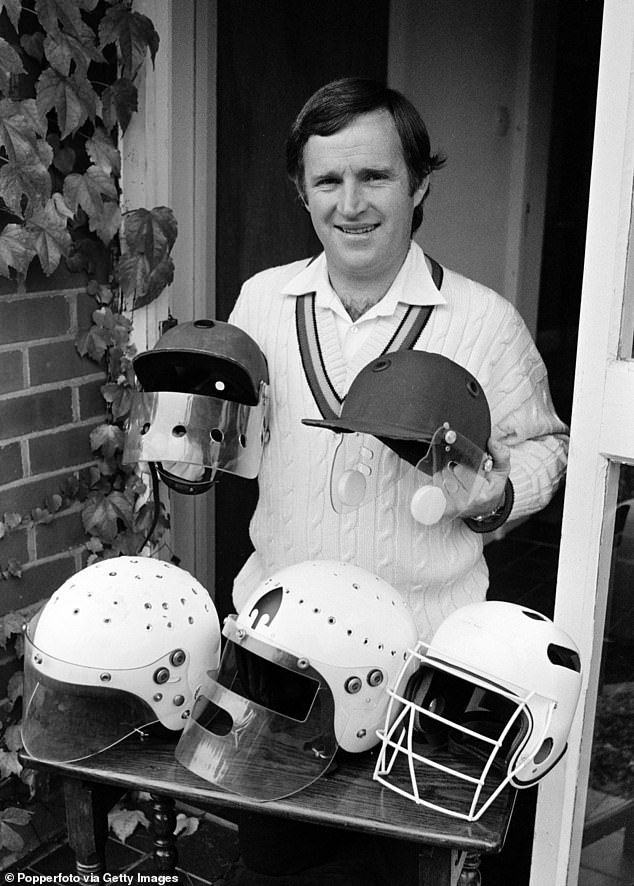 Dennis Amiss, pictured above in 1980, brought cricket helmets into the mainstream 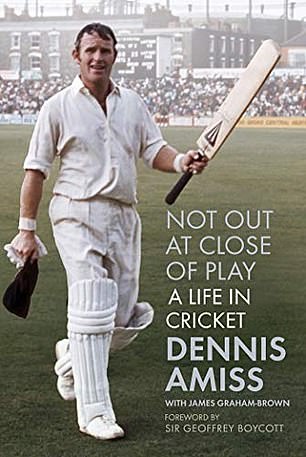 What no one else knew was that Amiss, now 77, had been undergoing hypnosis with the help of a psychologist called Lee Saxon, who gave him a cassette filled with positive thoughts.

‘Before I went out to bat, I was sitting in the dressing room playing this tape,’ says Amiss. ‘The lads thought I was listening to the Beatles. When I walked out all I could hear was the chant. It was like an amphitheatre. I had to remind myself of the positive messages.

‘The first ball whizzed past my chin and put me on my backside. I think the whole ground gave me the thumbs down. But it helped: I got 60-odd.

‘I’ve still got the tape now: if my wife asks me why I’m being negative I remind myself of the messages. Back then, the only backroom staff we had on tour were physios. We had to work things out for ourselves.’

To read Amiss’s engaging autobiography, Not Out At Close Of Play — A Life In Cricket, is to be transported back to a world that was both more vicious and yet more gentle.

For every tale of near-incitement to murder there is also humanity — such as the time Lancashire captain Clive Lloyd agreed to extend a dead Championship match by half an hour and bring on the occasional bowlers to allow Amiss, playing for Warwickshire, to tick off his 100th first-class hundred. Typically, the thoughtful Amiss came to regret Lloyd’s gesture, fearing it took the edge off his achievement (he later added two more centuries, just to be sure). 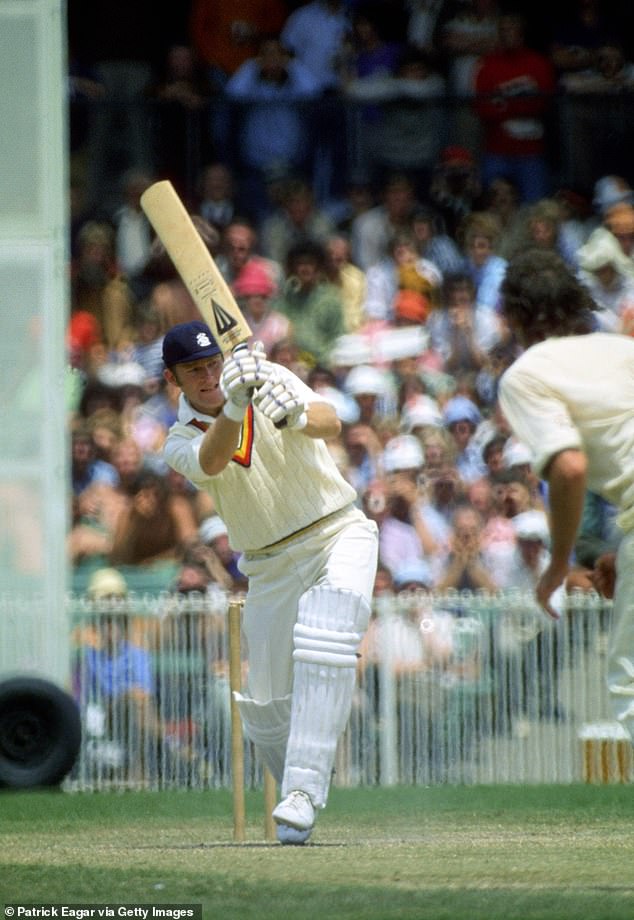 But make no mistake: he was a top-class batsman. His 50 Test matches brought him 11 hundreds — eight above 150 — and an average of 46. Another indication of his class is that his two greatest innings came against West Indies: 262 not out to help save a Test at Jamaica’s Sabina Park in 1973-74 and 203 at the Oval in 1976 when the headlines went instead to Michael Holding, who overcame a flat pitch by bowling full at the speed of light and took 14 wickets. Astonishingly, Amiss averaged 70 against West Indies.

He is also, to his surprise, the answer to a quiz question: who scored the most ODI hundreds in the 1970s, the format’s first decade? Amiss made four (one more than Viv Richards), including the very first — 103 against Australia at Old Trafford in 1972. One-day cricket, he says, brought him a rare sense of freedom.

‘I made myself into an opening batsman, so it was a chance to play myself in on good wickets,’ he says. ‘I loved it. I’d have loved to play in the IPL as an opener.’

His limited-overs prowess — as well as the hypnosis — hints at another facet of the Amiss story: he was often ahead of his time.

Invited to join Kerry Packer’s breakaway World Series Cricket venture in the late 1970s, he remembered the battering he and his team-mates had taken at the hands of Lillee and Jeff Thomson a few years earlier, and decided to wear a motorcycle helmet. The visor, Amiss says, could withstand a shotgun blast from 10 yards. 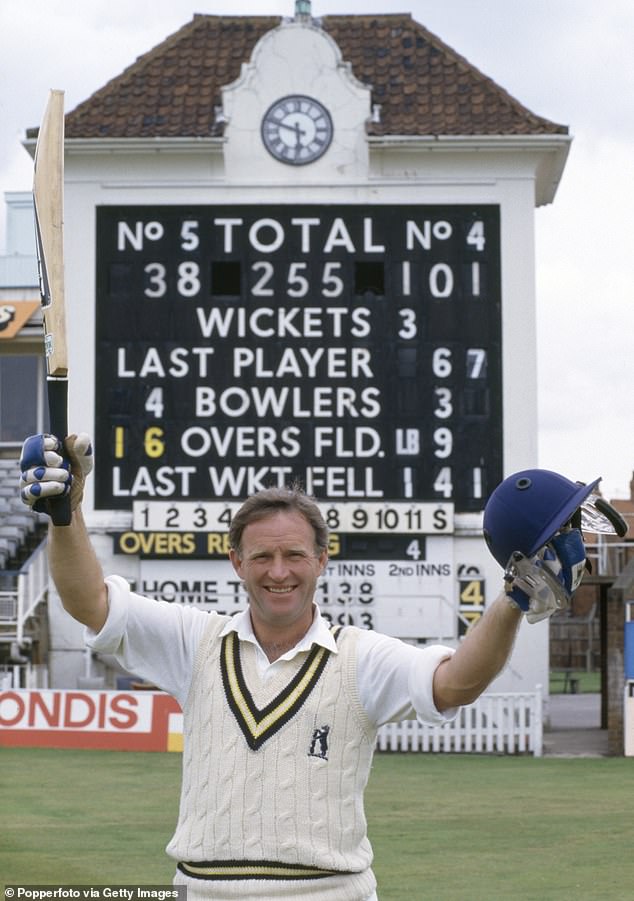 ‘The first time I wore it was against the World XI, and people were shouting, “Hey Amiss, where’s your motorbike?” But soon others were wearing it.

‘Then Australian David Hookes had his jaw broken by Andy Roberts and spent the next six weeks supping through a straw.

‘When he came back, he asked if he could borrow my helmet, and his first ball was from Roberts. He hooked him for six and Richie Benaud was on commentary, saying it was a great defining moment for cricket.’

Later, as chief executive of Warwickshire, Amiss signed Brian Lara as the club’s overseas player for the 1994 season. He paid all of £40,000. The bargain was well-timed: next day, Lara embarked on the Test match that would bring him a world record 375 against England in Antigua. ‘There were times that summer when we couldn’t find Lara because he was off doing adverts, probably to make up for the money he hadn’t got from us,’ says Amiss. But no one at Edgbaston was too bothered.

Lara scored more than 2,000 Championship runs, including 501 not out against Durham — another world record — and Warwickshire came within one match — defeat in the final of the NatWest Trophy — of an unprecedented quadruple.

However, not all Amiss’s choices met with universal approval. In his book, he doubles down on his decision to join the first of England’s rebel tours of apartheid South Africa, earning what MP Gerald Kaufman called ‘blood- covered Krugerrands’. 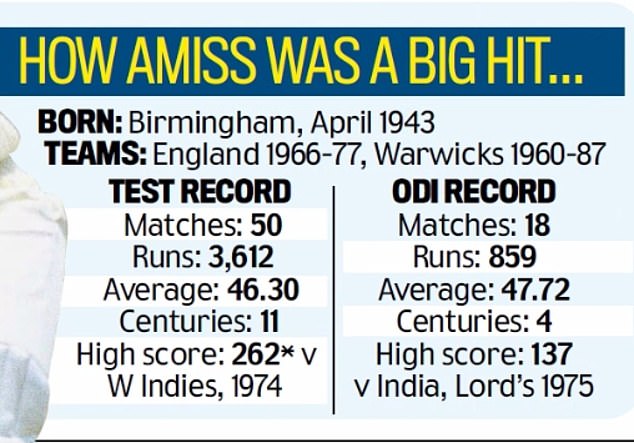 Amiss writes: ‘Almost 40 years after the tour I still feel a sense of injustice at the way we were condemned.’

In what way? ‘I didn’t agree with apartheid,’ he says now. ‘But that was changing and Ali Bacher (who was organising the tour) contacted us to say we could help with coaching at all sorts of schools — black kids as well as white. We felt we could help youngsters develop their game. We wanted to open their eyes to cricket. That was important.’

Asked if he had any regrets, he is drawn inevitably to the Ashes. ‘I was disappointed I didn’t score more runs against Australia. That is how you’re judged by your fellow players.

‘But if someone had asked me at the start whether I’d be happy with 50 Tests, 11 hundreds and two doubles against West Indies but not many runs against Australia, I’d have snapped their hand off. I had 50 years in the game — 30 as a player, 20 as an administrator. I was lucky.’