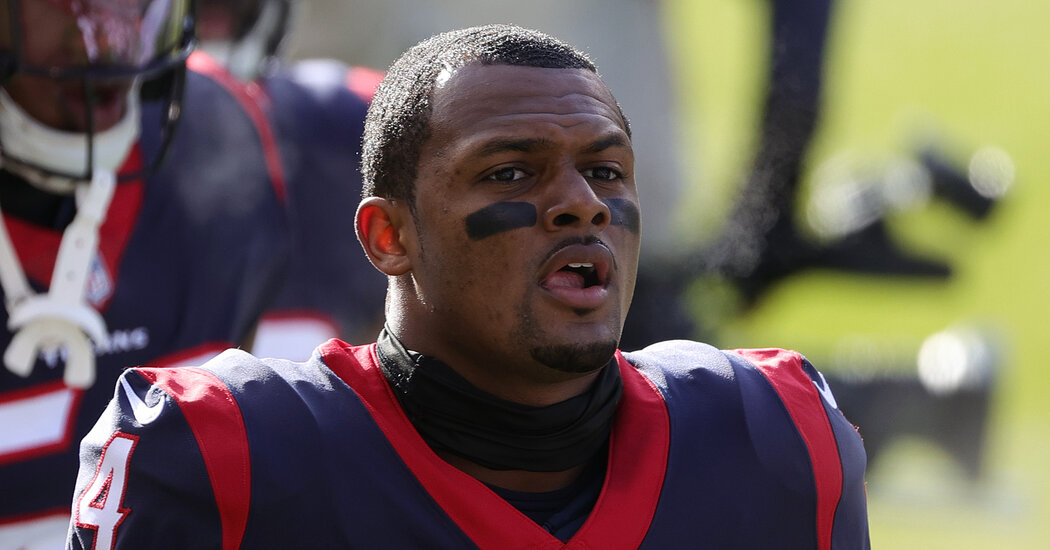 Allegations of assault and sexual misconduct against the Houston Texans star quarterback Deshaun Watson have mounted over the past week, as 16 women have filed civil suits against him and their lawyer has publicized the accusations on social media and in a news conference that was streamed online.

Aside from an early denial of the first two claims, Watson has remained mostly silent. In the first substantive rebuttal to the accusations, Watson’s lawyer, Rusty Hardin, on Tuesday challenged the veracity of all the claims and described one of the two allegations of sexual assault as an attempt to blackmail his client.

Watson’s attorney also said that he had “strong evidence” demonstrating that the first lawsuit claiming sexual assault was false, and he said that “calls into question the legitimacy of the other cases as well.”

“I believe that any allegation that Deshaun forced a woman to commit a sexual act is completely false,” Hardin said.

Buzbee responded to the statement Tuesday in a message posted to Facebook, saying he “would respectfully suggest there are many facts here, that we will put in public filings, that Mr. Hardin might not be aware of.” He wrote in the post that he anticipated being able to add more details in a statement later this week.

Since March 16, a total of 16 women have accused Watson of assault in civil lawsuits filed in Harris County, Texas, where he is a resident. According to the complaints, the incidents have taken place from March 2020 to this month. Although most are said to have occurred in Texas, two were said to have happened in Georgia, Watson’s home state, this month, and in California, where he was visiting in July 2020.

The suits that accuse him of sexual assault say that Watson pressured both women to perform oral sex during massages and that he grabbed one woman’s buttocks and vagina.

Hardin’s statement referenced the first allegation of sexual assault, which is said to have occurred on Dec. 28, 2020. That day, according to the complaint, he coerced the woman to touch his genitals and perform oral sex. The woman was so upset, the complaint said, that she blacked out for a few minutes.

The statement from Watson’s lawyer on Tuesday included a signed affidavit from Bryan Burney, the quarterback’s marketing manager for the past three years. The affidavit states that Burney spoke in January with a woman believed to be the plaintiff in the first claim of sexual assault. Burney said that the woman had asked him to pay her $30,000 on Watson’s behalf for “indefinite silence” about an encounter with Watson that Burney said she characterized to him as consensual.

After Burney declined to pay, the statement said, he received a second call from a man who claimed to be the woman’s business manager. That man claimed something embarrassing would be revealed if Watson did not pay to keep it a secret. Watson, Burney said, did not meet the man’s demand.

Hardin added in the statement that Watson’s team was “taking the allegations very seriously and we ask only that people not rush to judgment, that people not be unduly influenced by opposing counsel’s antics, and that they let fundamental fairness to both sides rule the day.”