Jofra Archer could miss the first Test of England’s series against New Zealand if he fails to prove his fitness next week for Sussex.

Archer bowled 29.2 overs in a Second XI game at Hove this week, taking two for 102, but England want to see him in first-class action before deciding whether he is ready for the series, starting at Lord’s on June 2.

Amid ongoing concerns about his right elbow, Sussex medical and coaching staff will chat with Archer on Monday before deciding his availability for Thursday’s fixture against Kent at Hove.

Jofra Archer (above) bowled 29.2 overs for Sussex in a Second XI game at Hove this week

Since Sussex have no county championship match in the round beginning on May 19, the Kent game would be his last opportunity to convince head coach Chris Silverwood that he is fit for Test cricket.

His last first-class outing was in late February, against India at Ahmedabad, though it is understood he was keen to play for Sussex this week against Northamptonshire.

One player who might benefit from Archer’s absence at Lord’s is his club-mate Ollie Robinson, who took five for 58 despite Northants racking up 441 for nine declared at Wantage Road. Saif Zaib, 22, starred as he hit a maiden century. 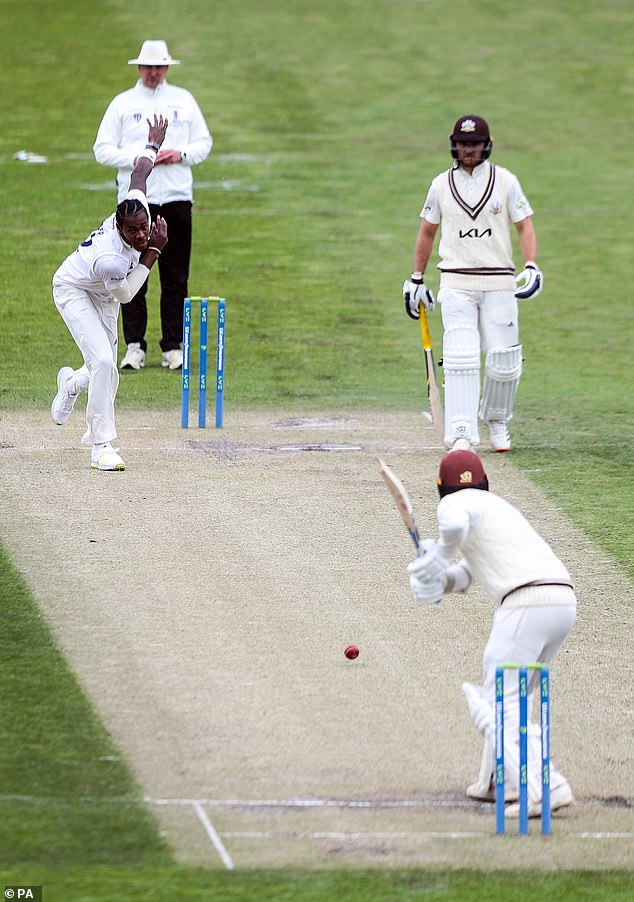 Another England hopeful, batsman James Bracey, did his hopes of a Test debut no harm with a smart innings of 75 as Gloucestershire made 273 in reply to Middlesex’s 210 at Lord’s. James Harris picked up his 500th first-class wicket when he bowled Ian Cockbain for 51.

Jimmy Anderson, meanwhile, moved to within eight of 1,000, adding the scalps of Billy Root and Dan Douthwaite to his tally as Glamorgan made 344 against Lancashire at Old Trafford.

Anderson’s Test captain Joe Root fell for 41, strangled down the leg side by Matt Quinn, as Yorkshire replied to Kent’s 305 with 240 for five.