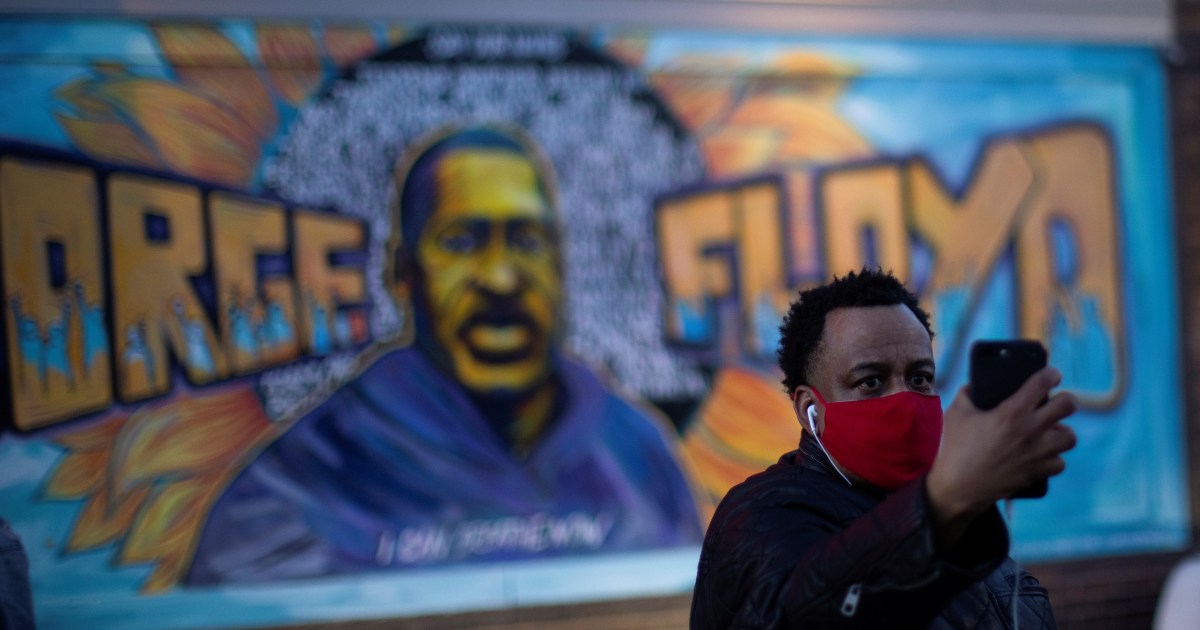 The conviction of former Minneapolis Police Officer Derek Chauvin was met with a sigh of relief of activists, legislators, US citizens and officials, many of whom have long called for accountability in the killings of unarmed Black people in the country.

It also had many – including US President Joe Biden – asking what comes next, and calling for greater police reform and support for communities of colour.

On social media, many pointed to the initial Minneapolis Police Department’s version of Floyd’s death, which said Floyd died “after a medical incident during a police interaction” and did not mention that Chauvin had kneeled on his neck for nearly nine minutes, as proof of just how precarious police accountability remains in the US.

“This fabricated police story might have become the official account of George Floyd’s death if concerned citizens had not intervened and recorded the police,” tweeted political commentator and former Bill Clinton aide Keith Boykin.

This fabricated police story might have become the official account of George Floyd’s death if concerned citizens had not intervened and recorded the police. pic.twitter.com/9XOD5TkK3B

International and US rights groups, legislators, and foreign officials were also quick to point out that the verdict reached in former officer Chauvin’s case, which relied on a stark depiction of Floyd’s killing captured on cell phone video and police body camera footage, as well as the eventual condemnation from his Minneapolis Police Department supervisors, remains an exceedingly rare occurrence in the US.

“As we have painfully witnessed in recent days and weeks, reforms to policing departments across the US continue to be insufficient to stop people of African descent from being killed,” Michelle Bachelet, the UN human rights chief, said in a statement on Wednesday.

“The truth is that Derek Chauvin being held accountable for killing George Floyd is the exception – not the rule,” said Amnesty International’s Paul O’Brien, in a statement following the verdict.

“We must acknowledge the racist roots of law enforcement in this country if we are to address the systemic failures of policing and bring about meaningful public safety for those that have been historically overpoliced,” he said.

Justice for #GeorgeFloyd has been rendered. But there are hundreds more waiting for justice. Todays verdict should only be the first step towards a long overdue proportionate attention to, and admission of, the historical crimes committed against black communities pic.twitter.com/iBcaQSppKE

Human Right Watch’s John Raphling added that beyond the high profile killings, “police continue to have coercive, but non-fatal, interactions with people, especially Black, brown, and people living in poverty, that do nothing to advance public safety.”

“A criminal conviction for the most egregious and dramatic incident of violence is unlikely to change the systemic problems of US policing,” he wrote.

What happens next in the case?

Chauvin is expected to seek to overturn his conviction on second- and third-degree murder and manslaughter, likely arguing, as the defence did throughout the trial, that the jury was prejudiced by media coverage and a highly publicised $27m settlement in the civil case brought by George Floyd’s family.

His attorneys will have 60 days to notify the court of a planned appeal, which could result in overturning all or some of the charges, notably the charge of second-degree murder, which carries a maximum sentence of 40 years, although a much shorter sentence of 12.5 years is recommended by Minnesota guidelines for someone with no previous convictions, like Chauvin.

Legal experts generally believe that Chauvin’s chances of a successful appeal are slim, noting that his appeal will also likely focus on protests over the police killing of Daunte Wright, an unarmed Black man in the nearby city of Brooklyn Center in early April, and comments made by US Representative Maxine Waters, who urged protesters to “get more confrontational” if Chauvin was acquitted.

Still, Joseph Friedberg, a Minnesota criminal defense attorney, told Reuters news agency that an appeals court would likely not overturn a conviction because of media coverage or emotional protests.

“Cases aren’t going to be reversed on that basis,” he said.

Judge Peter Cahill said that Chauvin will be sentenced in eight weeks. He technically faces up to 75 years in prison, if he is given consecutive maximum sentences for the three charges. Based on state guidelines, he is more likely to face about 40 years on the higher end of sentencing.

Floyd’s death helped to reignite a movement for racial justice in the US that has historically grown in the wake of high-profile police killings, only to ebb as officers repeatedly escaped criminal charges.

Images of the event – which became known as “Bloody Sunday” – shocked the nation and helped to galvanise support for the 1965 Voting Rights Act.

“The world is watching,” he told CBS news of Chauvin’s trial.

While justice landed Derek Chauvin behind bars for murdering George Floyd, no amount of justice will bring Gianna’s father back.

We will not rest until all in our community have the right to breathe. #DerekChauvinTrial

Congresswoman Karen Bass has also said she believed the trial would give momentum to the “George Floyd Justice in Policing Act”, which seeks to reform policing on the federal level and has been twice passed by the Democrat-controlled House of Representatives.

The bill, which would impose a blanket ban on chokeholds and no-knock warrants, while limiting policies that make it more difficult for police to be held personally liable for their conduct while on duty, has languished in the Senate. It faces an uphill, if not insurmountable, battle to reach its 60 vote threshold in the chamber, which is split 50-50 Democrats and Republicans.

Police reform on the local and state level has been more successful since Floyd’s death, although police changes considered by advocates to be “transformational” have been elusive.

Since Floyd’s death, at least 30 states have passed more than 140 new police oversight and reform laws, according to an analysis by the New York Times of data compiled by the National Conference of State Legislatures.

Meanwhile, since the protests last year, 46 of the 100 largest US cities adopted new policies against the use of chokeholds, strangleholds and pressure positions like the one that killed Floyd, according to data collected by Campaign Zero. Another 13 cities are reviewing their policies and 27 already had bans.

But advocates say the patchwork approach leaves communities vulnerable across the country.

However, he added, “we know, alone it’s not enough.”