Exeter lock Jonny Hill scored twice in front of Eddie Jones as Chiefs struck a blow for English clubs in the Champions Cup by marching into the last eight.

Ring rusty at first, Exeter survived the shock of being 14-0 within eight minutes to rediscover their power game and dominate thereafter with Hill at the forefront.

Rob Baxter’s side scored seven tries to make it third time lucky for the Premiership after Gloucester’s defeat to La Rochelle on Friday and Wasps’ late loss to Clermont in Saturday’s early game. 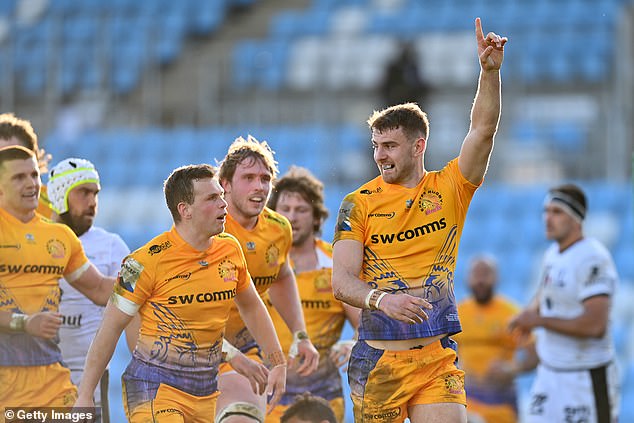 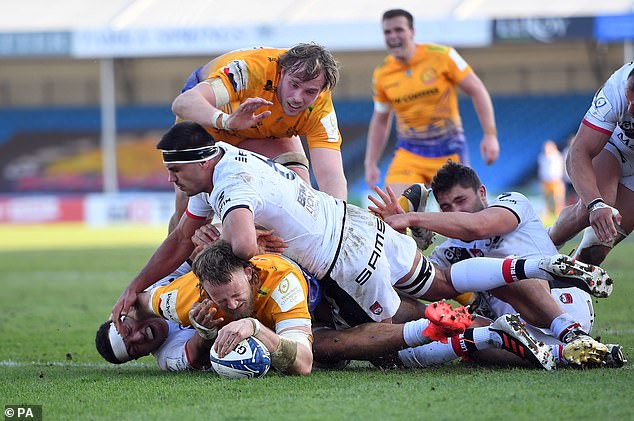 The win books a quarter-final back at Sandy Park against Leinster but they will be waiting on the fitness of skipper Joe Simmonds who limped off after 67 minutes.

Lyon are novices on the European stage – this was their first knock out game – but they were two tries up in the blink of an eye. Jones had hot-footed it down to Sandy Park after the lunchtime game in Coventry and it was looking bleak for his England representatives.

First full-back Toby Arnold went through Chiefs prop Alec Hepburn and put scrum-half Baptiste Couilloud away. Then Exeter made a hash of their own line out and a long pass from Lyon captain and centre Charlie Ngatai made a try for wing Xavier Mignot. 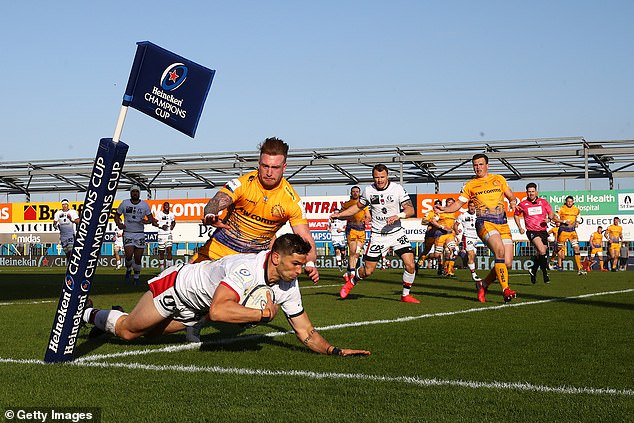 But Lyon had not been watching the Exeter highlights reel. First they gave a penalty away 40 metres out. Captain Simmonds snubbed the three points, went for a line out and after hammering away at the Lyon line Hill went over.

Lyon lost prop Vivien Devisme to the bin for pulling down another Exeter drive and on 26 minutes Hill had his second from short range. Henry Slade and Olly Woodburn combined to make a third for wing Tom O’Flaherty and Olly Devoto added Exeter’s fourth to give them a 26-20 lead at the break.

Lyon threatened to get back into it when centre Pierre-Louis Barassi cut Exeter open but Olly Woodburn’s tackle and Luke Cowan-Dickie’s turn over snuffed out the danger. Then Dave Ewers went over, Chiefs claimed a penalty try and Woodburn finished it.