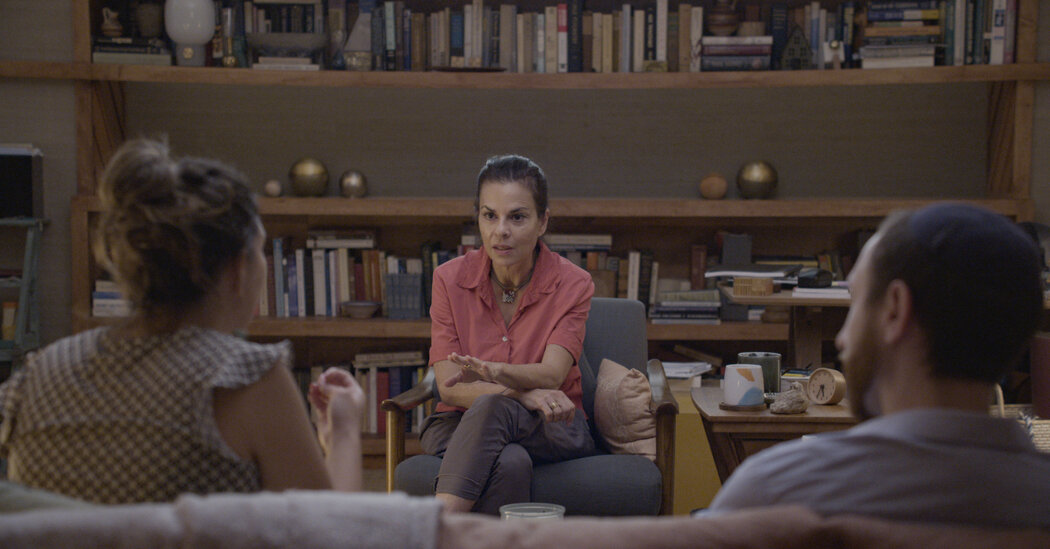 Tashira and her partner of three years, Dru, were curled up one night in Fall 2019, watching an episode of the first season of the Showtime documentary series “Couples Therapy.”

And marveling at how a piece of each couple’s struggles seemed to mirror their own.

“We just related to every couple,” Tashira, a 37-year-old special education teacher, said in a video interview earlier this month. She lives in Queens with her partner, Dru, a 32-year-old train operator, and their two young sons. (As on the series, the patients did not share their last names.) The couple watched every episode.

Then, in November, Tashira saw the series’s social media call for couples for Season 2.

And she thought: Why not us?

“It was important for us to share our story and let people know that everyone deals with these things,” Tashira said. “That you aren’t alone.” (The prospect of free couples therapy, which can run as high as $400 per 45-minute session in New York City, didn’t hurt either, she said.)

After a four-month selection process, the couple made the final cut for the show’s nine-episode second season, which premieres Sunday on Showtime. The half-hour series, which its creators say aims for realism over “Real Housewives”-style shock value, lets viewers eavesdrop on New York City couples who are hashing out their intimacy issues in weekly hourlong talk therapy sessions with Dr. Orna Guralnik, a Manhattan-based clinical psychologist and couples therapist with 26 years of experience.

“Three people talking in a room” doesn’t sound like a premise that would have viewers clamoring for a sequel. But “Couples Therapy,” which was designed to lift the veil on the normally private therapeutic process, was a surprise hit when it debuted in 2019. People saw aspects of their own domestic issues reflected in each couple’s struggles, and wanted more.

What they will see in Season 2 might be even more relatable. After the world shut down because of the coronavirus, couples everywhere endured the stress not only of spending too much time together but also of lost work, caring for sick loved ones and trying to keep sane while navigating Zoom school and child care. The couples chosen for the new season were no exception.

“The pandemic brings out where a couple really is,” Guralnik says in an episode of the new season. “There are all these exits that people have to get out of the intensity of whatever is brewing. The quarantine is a situation where, I mean, in a way, there’s no exit.”

And that’s before you add cameras; airing one’s dirty laundry on television — and, for the filmmakers, finding thoughtful ways to elicit and present it — is difficult even under normal circumstances. But the pandemic also posed a particular challenge this season after production was shut down three weeks into filming: Could the team continue shooting remotely? Would the intimacy be as authentic?

Meanwhile, the couples faced the same question as so many others weighing remote therapy: Would the sessions be as comfortable and effective?

For this season’s directors, Kim Roberts and Josh Kriegman, it was never a question of if they would persevere — only how.

“We knew we had to figure out how to keep going and stay in the room with the couples,” Roberts, who edited the show’s first season, said.

The second season, shot from February to September 2020, follows three new couples: an Orthodox Jewish woman and her husband, who run into trouble over his failure to deliver the life she wants; a young gay couple, who navigate one partner’s battle with near-fatal alcoholism; and Tashira and Dru, who were brought by an unplanned pregnancy into a live-in relationship that always felt tenuous.

Through roughly 20 sessions that were ultimately stretched across eight months — three weeks in person, 19 remotely, then again 10 in person but under strict coronavirus protocols — the couples met with Guralnik every week or two, navigating job loss, remote school and “oh by the way we have no escape from each other”-ness.

“It was hard!” Dru said. “Having all this stress and anxiety put me on edge. So it was very easy to not be as open as I wanted to be.”

But he said the production process, which employed concealed cameras for the in-person sessions, never felt voyeuristic.

“Before we started therapy, I was thinking about the cameras,” he said. “But soon I forgot this was even becoming a show. Every week, it was like: ‘OK, it’s time for therapy. It’s time for work.’”

The secret, Kriegman said, is the show’s not-so-secret weapon: Guralnik. She has a calming presence, but she brooks no gamesmanship. Her brows arch as she leans forward to listen, deep in concentration; when she relaxes, her dark, steady eyes brim with understanding — but sometimes only after she has offered a sharp rebuke.

The directors and executive producers interviewed hundreds of therapists, Kriegman said. But they knew after a 20-minute phone call that they had found their star.

“I think you can tell from watching her just what a special person she is — her charisma, brilliance, skill and energy,” he said. “Not to mention her extraordinary presence.”

Yet the series’s star may also be its biggest cipher. That’s by design, Guralnik, 57, said in a recent video interview from her Brooklyn home, the music of chirping birds and her barking Alaskan Klee Kai, Nico, providing the soundtrack. (The show’s breakout star looks like a miniature husky.) She demurred when asked whether she was married, how old her children were and whether she had ever taken part in couples’ therapy as a patient.

“I’m just a vessel for the work,” Guralnik said, her long brown hair pulled back into a loose ponytail and wearing wide-framed black glasses. “I don’t want to burden the audience with details about my life.”

But when the pandemic hit, her patients were suddenly afforded a peek inside her home — and she inside theirs.

“When they suggested doing it from home, it seemed completely impossible,” she said. “But the couples had already started treatment, and with the lockdown and pandemic turmoil, they needed double the help.”

The team shipped microphones, Ethernet cables and webcams to Guralnik and the couples, and she carried on guiding couples toward empathy — through a screen.

In fact, she said, the remote sessions became, in some ways, even more intimate — which was also true for couples in her private practice who weren’t on the show.

“People were doing sessions literally in a closet with clothes hanging over their head, or in the bathroom, or with someone nursing in her bed,” she said. “There was a beautiful intimacy to it.”

But it also reinforced, she said, the preciousness of having a designated office space, a “special bubble” resistant to life’s intrusions.

“It’s a magical hour,” she said. “And that gets interrupted if the hour doesn’t start exactly on time, or a package gets delivered, or someone’s kid opens the door and yells something, or someone’s husband needs to walk in and take something out of the closet right then and there.”

And the challenges she was tasked with helping couples navigate, she said, were not limited to differences in parenting philosophy, communication styles or intimacy preferences. Some struggled with not being able to see family halfway across the world. Others were coping with added worries over the 2020 election or the social unrest following the death of George Floyd.

“There are all these things happening in the world that you see reverberating in the couple and the work,” she said. “And it’s so important to capture that and make use of it in the work rather than just ignore it.”

But what do you do when you don’t know the answer — and thousands of eyes are watching? If she ever felt out of her depth, she said, it did not perturb her.

Guralnik said that even though the couples were on camera, and thus prone to be “unavoidably more performative,” they couldn’t help but be themselves. The sessions were edited for structural and entertainment purposes, of course — all three couples’ treatments span the entire nine episodes, and not all sessions were included. But anything omitted, she said, was not because of phoniness or because things got too personal. It was only because the filmmakers decided to take it out.

Tashira confirmed this. “Pretty much everything went in,” she said.

Jean Fitzpatrick, a relationship therapist based in Manhattan who is not affiliated with the show, said she hoped the series removed some of the stigma around couples counseling.

“Sometimes people think starting marriage counseling is a sign your relationship is headed for divorce,” she said. “It’s great for people to have the opportunity to see that in an emotionally safe space they can understand each other better, heal from past hurts, and connect more deeply.”

There may be few better advertisements for the benefits of therapy than the commitment of the show’s patients — and the progress they often make. In September, as the eight months of sessions came to a close, the couples understandably had some separation anxiety.

“You unconsciously depend on the therapy,” Dru said. “But we talked about it, and we decided now was the time for both of us to take the lessons we’d learned and put them to work.”

The couple also opted to continue weekly counseling with another therapist, a perk available to each couple at the end of the season, Kriegman said. (The couples receive what Showtime characterized as a “small stipend” for their participation.)

So how are things going for Tashira and Dru now?

“It really taught me how to be vulnerable and open up,” Dru said, looking into Tashira’s eyes, his arm never budging from around her shoulders during the 20-minute interview.

“It was a complete turnaround,” she said, meeting his gaze. “Now we can actually speak and feel like we understand one another, and that has made our relationship so much stronger.”