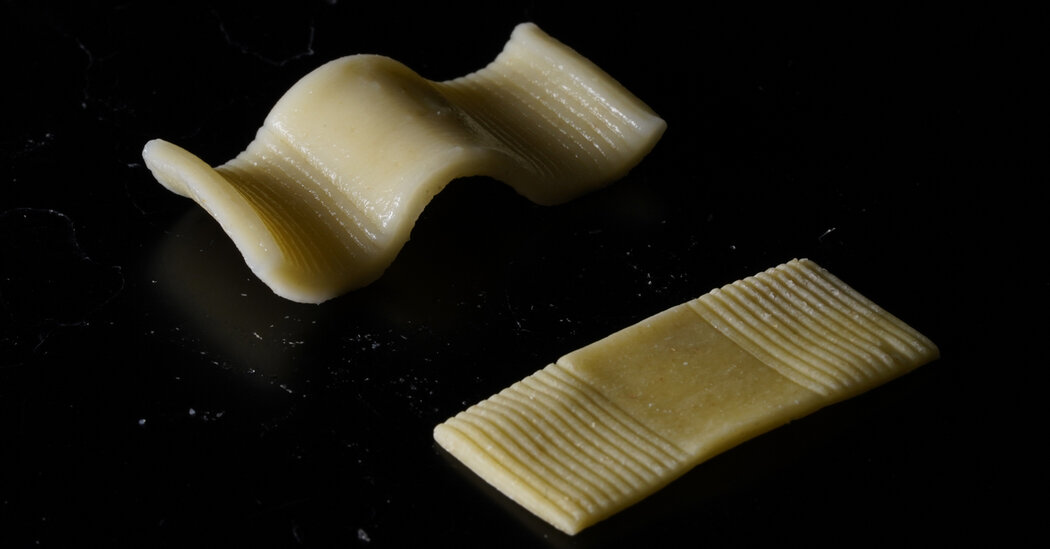 Don’t be fooled. This pasta may look like your average fettuccine. But cook it for seven minutes in boiling water and it will transform, coiling into a neat spiral.

The dynamic noodle is one of several designed and debuted this week by researchers at a Carnegie Mellon University lab.

Each new pasta design starts out flat and unassuming, but bounces and swells into three dimensions when boiled. In a paper published Wednesday in Science Advances, the researchers say the flat-to-plump pasta is not only fun to make, but uses less packaging, has a smaller carbon footprint and cooks faster than traditional dried pasta.

“I think it’s really cool and elegant,” said Jennifer Lewis, a professor of biologically inspired engineering at Harvard University who was not involved in the study. “Anytime you can bring science to people through food, it’s a huge win.”

The research project didn’t begin as a culinary endeavor to remake one of the world’s most popular foods, said Lining Yao, a mechanical engineer at Carnegie Mellon and a co-author of the new study. Instead, in 2017, Dr. Yao and her colleagues set out to pattern and build two-dimensional structures that could transform themselves into three-dimensional shapes.

“We were thinking edible material could be very interesting,” Dr. Yao said. “We landed our eye on pasta,” she said. It’s not only simple and ubiquitous, but has the added bonus of being “very rich in its shape design.”

In the food industry, pasta is typically made by folding or by squeezing dough through a metal die and into the desired shape, be it an elbow, a twist or a tube.

For their new, shape-shifting pasta design, Dr. Yao’s team took a different tack. They began with a conventional recipe, mixing a simple combination of semolina flour and water, then using a classic roller to create sheets of dough.

Then, they strategically stamped the flattened dough to create tiny patterned grooves on its surface. During cooking, surfaces with grooves expand less than smooth ones, giving rise to shapes like boxes, saddles and waves.

“You can just make a modification to a pasta dough and get a very impressive shape change,” said Teng Zhang, a mechanical and aerospace engineer at Syracuse University and a co-author of the study.

For the research, Dr. Zhang developed a computer model that predicted the final transformation of various designs based on factors including how heat and water would change the dough’s gluten and starch during the cooking process. “It’s more complex than just swelling,” he said.

The resulting models and designs could be useful for food delivery to disaster sites or for astronauts in space stations — two environments where large amounts of food ideally should take up as little space as possible. Researchers also suggest in the paper that their work could have applications for soft robotics and biomedical devices.

Some of the scientists also put their experimental product to the test outside of the lab. A small group cooked it on a portable camp stove during a hiking trip near Pittsburgh, and Dr. Yao served the shape-shifting pasta at a dinner party. Both trial runs were a success, she said.

As for the rest of us: Don’t hold your breath for a flat-to-cavatappi pasta.

When the team began developing truly complex designs — including a self-folding rose flower pasta — they found the pasta would probably need to be several inches wide, which is larger and more cumbersome than ideal. They also struggled to create certain geometric shapes like seamless cones and domes.

The researchers also found that the pasta best held its 3-D shape when cooked not much longer than 7 minutes.

“In other words, the pasta can never not be al dente,” Dr. Lewis said. “So this is great as long as you like al dente pasta. I personally am a fan.”