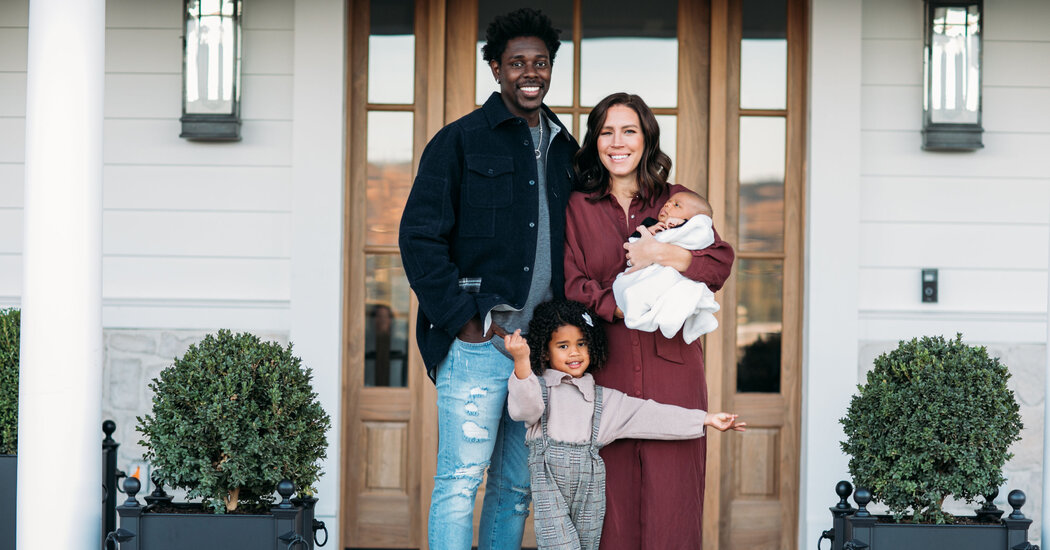 It was not until May, which the Bucks began with back-to-back victories over the Nets, that Milwaukee loudly announced it was still an N.B.A. championship contender. Jrue Holiday scored 14 points in the first quarter of the second win, and in a contented home locker room, one of the league’s foremost defensive players let his guard down.

As he made his usual postgame scan of his phone for messages, he was greeted by a text from his wife, Lauren. It included the words that will get any spouse’s attention: “We need to talk.”

“You could have done more,” Lauren Holiday wrote.

After his productive first quarter, Jrue Holiday scored only 1 point in nearly six minutes in the second quarter. Lauren Holiday, who won two Olympic gold medals and the 2015 World Cup as a bustling midfielder with the United States women’s national soccer team, did not regard the sweep of the Nets or her husband’s play as a significant statement. She said she “felt like he took the quarter off.”

“It’s not that I think he did poorly,” Lauren Holiday said. “I just wanted to know what his thinking was — just help me understand. At first he said, ‘I took what the defense dictated,’ and I said, ‘No, I don’t agree.’ Those are the conversations he has to have just because I’m also a competitor.”

The Holidays have been a tandem since they were athletes at U.C.L.A., and only grew closer after doctors found she had a brain tumor in June 2016, six months into her pregnancy with their daughter, Jrue Tyler. They have two children now, and maintain deep rooting interests in each other’s sports. They also oversee a seven-figure social fund that supports Black-led nonprofit organizations and Black-owned businesses, after deciding last year that they could be doing more as a couple, too.

They relocated to Milwaukee from New Orleans in November. The Bucks viewed Jrue Holiday as the sort of marquee addition whose arrival would persuade Giannis Antetokounmpo to make a long-term commitment to the small-market franchise, so the Bucks surrendered the veteran guards George Hill and Eric Bledsoe, three future first-round draft picks and the rights to swap two more first-round picks to get him as part of a four-team trade.

After a nervy wait for Bucks fans, Antetokounmpo signed a five-year, $228 million contract extension, the so-called supermax, 21 days after the trade, only for Holiday to quickly discover that business matters were merely a part of the burden.

The Bucks have not won a championship since the 1970-71 season. Antetokounmpo shoulders the weight of expectations more than anyone in town, after winning back-to-back Most Valuable Player Awards and last season’s Defensive Player of the Year Award, but Holiday is next in line. He was billed as the Bucks’ missing piece who, despite just one All-Star appearance and 31 playoff games on his 11-year résumé entering this season, would lift them to a new level. And that talk began months before he signed a four-year contract extension in April worth at least $134 million.

“It is something that you don’t get used to but you have to accept if you want to be in this line of work,” Holiday said.

Lauren Holiday agreed. She played in four major competitions in her eight-year career with the national team, helping the United States win three of them. Although the 2011 World Cup final slipped away on penalty kicks against Japan, she said she only ever imagined going four for four.

“The N.B.A. is like a different world,” she said. “They try to manage their bodies. That part of basketball, how they rest, that’s all foreign to me. I’m 110 percent all the time. That’s all I know. That was instilled in us on the national team: ‘You are winners. We win. We don’t lose.’”

Lauren Holiday’s expertise in coping with lofty expectations makes her a helpful sounding board for her husband as he heads into a postseason in which the Bucks will be immediately confronted by some demons, thanks to a first-round matchup against the Miami Heat. Milwaukee was dominated by Miami in five games last summer in a second-round series in the N.B.A. bubble at Walt Disney World, crashing out early after posting the league’s best regular-season record for the second consecutive year.

She was also the primary source of counsel when Jrue, still with New Orleans, gave strong consideration to skipping the N.B.A. restart. Their JLH Fund was inspired by her suggestion that he finish out the Pelicans’ season and donate the remainder of his 2019-20 salary ($5.3 million) to help Black communities ravaged by the pandemic and a summer of social turmoil after the May 2020 murder of George Floyd in Minneapolis.

The initial focus of the grants were the cities closest to the Holidays: New Orleans, Indianapolis (her hometown) and Los Angeles (his hometown). On Monday, they will donate an additional $1 million to the fund to begin a second round of grants and add Milwaukee to the list of featured cities.

“I’m not going to lie: I didn’t really want to go to the bubble,” Jrue Holiday said. “It didn’t feel like it was the time for basketball. My wife was pregnant. I just felt like me leaving my family wasn’t the best for my family. I also wanted to go out and protest, but I couldn’t do that because I had to protect my family from Covid. I felt like I needed something to motivate me to go.”

The new season, in a new city, predictably brought fresh challenges. Hendrix, the Holidays’ son, was 5 weeks old when the trade to Milwaukee went through. They chose a house, Lauren Holiday said, largely by scrolling through “pictures on Zillow.” It was the first house Jrue has lived in with a basement — which proved a vital utility when he had Covid-19 in February and missed 10 games.

He said he moved into the basement for nearly two weeks of “isolation in my house.” Contact with the children peaked with FaceTime calls and pictures that 4-year-old J.T., as her parents call her, drew for her father and left at the top of the basement stairs.

“I got to at least hear my kids,” Jrue Holiday said.

He said he had “all the symptoms — chills, fever, headache, body aches, and I lost my taste and smell.” Yet Jrue, who will turn 31 next month, has recovered to assemble the best season of his career. He was shooting a career-high 50.3 percent from the field and 39.2 percent from the 3-point line entering Sunday’s season finale against Chicago, while only adding to his reputation as one of the game’s top two-way players. Respected veterans like Portland’s Damian Lillard and Miami’s Andre Iguodala have anointed him as the N.B.A.’s best individual defender. His strength, anticipation and aggression enable him to guard four positions on the floor, despite standing at just 6-foot-3.

“He’s special on that side of the ball,” the Nets’ Kevin Durant said.

Lauren Holiday said: “He’s playing with such freedom. And I feel like that was what he needed. I think change can be good sometimes, and this change has been just tremendous for him.”

External judgment will naturally depend on how much Holiday can help the Bucks in the playoffs. After dominating the past two regular seasons and then having humbling playoff eliminations inflicted by Toronto in 2019 and Miami last year, Bucks Coach Mike Budenholzer heeded calls to experiment offensively (more screening) and defensively (more switching). The target was increased versatility, in support of a more top-heavy roster after relying for years on depth around Antetokounmpo, but the experimentation came with a cost.

Sinking to No. 3 in the Eastern Conference means the Bucks’ path, just to earn a berth in the N.B.A. finals for the first time since 1974, could require them to eliminate Miami, the Nets and top-seeded Philadelphia in succession. Holiday’s presence theoretically eases pressure on Antetokounmpo and the sharpshooting Khris Middleton, but the trade assets and contract he commanded require Holiday to deliver All-Star production — whether or not he ever formally regains the All-Star status he achieved in 2012-13 with Philadelphia.

An undaunted Holiday insisted that he was “ready to go,” and that he wished the playoffs “were here already.” Welcoming more pointed postgame critiques from Lauren, he added, is wrapped up in that readiness.

“She’s literally the athlete and the winner in our family,” Jrue Holiday said. “Getting that from her means a lot to me. It’s real, and she backs it up.”