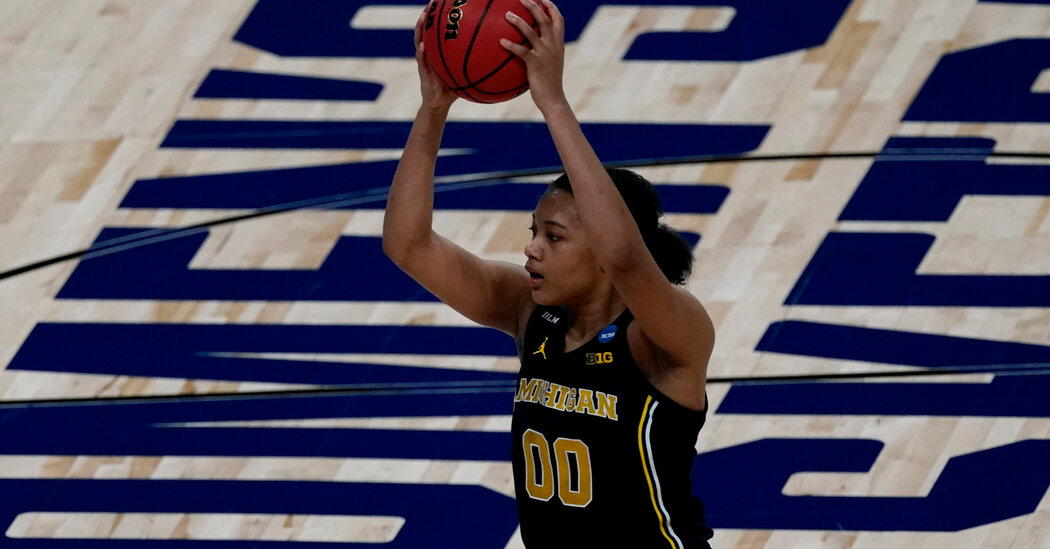 After No. 6 seed Michigan made its first round of 16 in the N.C.A.A. women’s basketball tournament, an emotional reaction by the all-American forward Naz Hillmon offered a window into a season that has been about much more than winning for the team.

“I’ve gotten a lot of individual accolades, and they’re always great,” Hillmon said. “But seeing the work that my team has put in throughout the year, and to be finally recognized as a team, is the best accolade that I could ever get.”

As Hillmon spoke, she wore a T-shirt with a small circular patch near her left shoulder that read “BLM,” the abbreviation for Black Lives Matter. “In this time, it’s more than just basketball,” Hillmon said. “More than just being teammates, it’s being sisters.”

For the Wolverines, as for much of sports and other areas of American society, the bulk of 2020 and the first part of 2021 have been defined by the coronavirus pandemic and activism, particularly around racism.

Michigan’s 2020-2021 season was the program’s first to start 10-0, but its season was paused twice because of coronavirus protocols. Still, the players stuck with their plans to discuss social justice issues and engage in activism. They wore slogans like “Wolverine Against Racism” on their uniforms and warm-ups and registered people to vote. Social justice proved to be an avenue for Hillmon, who leads the team on the court, to help strengthen the team’s bonds.

Hillmon, 20, grew up in Cleveland, and her family was her entree to basketball: Her mother, NaSheema Anderson, played at Vanderbilt and in the American Basketball League, and her grandmother Gail Williams played at Bethune-Cookman and Cleveland State. Hillmon, who is Black, was comfortable talking about racism and discrimination with her parents, but she hadn’t thought about combining activism with her basketball career until George Floyd was killed by police last May.

“I couldn’t be silent about it anymore,” she said.

Hillmon began by reading the news, looking up words and phrases she didn’t know like “microaggressions” and “implicit bias,” and attending antiracism seminars. She also started reading books like “March” by the late Representative John Lewis, Democrat of Georgia.

“For a majority of my life, I’ve been sheltered,” Hillmon said. “So I haven’t even necessarily had to experience even a quarter of some of the stories that I’ve heard. But it definitely did make me think twice about, you know, the way someone phrased something, or the way one thing or another was put into place.”

At the same time, Michigan Coach Kim Barnes Arico was reaching out to her Black players to check on them in the wake of the protests in response to Floyd’s death. “She could just say: ‘No, we’re here to play basketball and go to school. We’re not here to be activists. We’re not here to be in politics.’ That’s the easy way,” Hillmon said. “But she didn’t care about what other people would think — she cared about what was right.”

Barnes Arico and Hillmon joined the Big Ten Equality Coalition, which was announced in June of last year in part to encourage athletes to express their views. But they quickly determined that it would be just as important to have frank, open, difficult conversations as a team about racism, which they hadn’t done before.

“We needed to talk about these issues because they don’t just affect the Black girls on the team,” Hillmon said. “They affect everyone.”

So they started talking, both on videoconferencing calls and after they could practice in person. They read together about antiracism and watched films including “Selma,” about the 1965 protest marches in Alabama that helped to expand voting rights. It wasn’t easy, Hillmon said, especially when it came time to have deeper and more personal conversations.

The conversations developed along with other efforts, including messages on team gear that were picked individually by each player. They observed Martin Luther King’s Birthday, Black History Month and Women’s History month, asking each player at practice to teach their teammates something new.

“It can’t just be a sound bite. It has to be a constant battle and a constant fight,” Barnes Arico said. “I feel like that’s my responsibility — more than being someone that’s just about X’s and O’s, it’s to teach these women to use their voices, to be powerful, to keep asking why and to keep trying to push the needle.”

The connection has changed the perspectives of players and the way they compete together.

“It’s a big turning point in our program,” Barnes Arico said. “We have many people from different backgrounds, and we had to educate ourselves. This allowed us to really gain perspective — to be closer with each other and feel like we could connect with each other on a different level.”

And, Hillmon said, they hope that connection can help them as they go deeper in the N.C.A.A. tournament.

“It just means a ton knowing that someone you call Coach wants to lead in more than just their field of coaching,” Hillmon said. “You go a little bit harder, because you’ve got somebody behind you vouching for you, and going as hard for you as you’re going for yourself.”