‘All right pal!’ chirps Steve Diamond, phoning out of the blue on Tuesday afternoon. ‘I want something from you lot for a change… I’ve got a few things to get off my chest!’

For the past three months, since his departure from Sale, Diamond has been watching events unfold from afar. From Dubai, to be precise, with a piña colada in hand.

‘The good thing now is that I don’t have to worry about getting fined or banned from the stadium for saying what I think!’ he adds, with a mischievous chuckle. 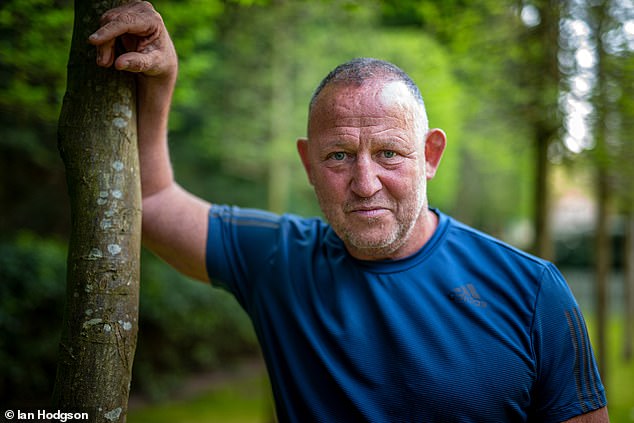 Since his departure from Sale, Steve Diamond has been watching events unfold from afar 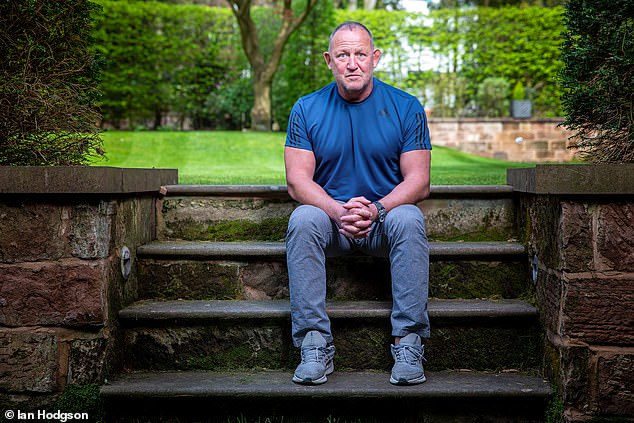 Twenty-four hours later, Diamond is pouring two cups of coffee, back at his home on the outskirts of Manchester. ‘I’ve only got instant… none of that posh stuff!’

He has just spent the morning at the golf club, where Manchester United captain Harry Maguire is also a member. ‘It’s football country up here,’ he points out.

‘If you go to the pub down the road when United or City are playing, it’s packed. I was speaking to the landlord the other day and he was in uproar about this European Super League… saying he would lose a s**tload of business because people wouldn’t want to come and watch the games in this closed shop league.

‘The backlash was huge, wasn’t it? That public swell created by Gary Neville. It’s those voices that forced it not to happen. Football’s shown its working-class roots this week. As Roy Keane said all those years ago, the middle-class prawn sandwiches have arrived.

‘Football’s gone from working class to middle class, but this week the working-class people stood their ground. They’re not interested in participation. They want competition. They want to see Gary Neville, Roy Keane and Jamie Carragher being vociferous with each other.

‘Rugby’s problem is that everyone’s a lot nicer. The pundits, the fans, the administrators… it’s a lot nicer and everyone gets on… as long as you’re wearing a fancy Barbour jacket! The sport needs to stop being so comfortable.

‘If I’d said what I think six months ago, while I was at Sale, I would have got fined or banned. Our sport has got to take a good look at itself because, if it’s interested in longevity, then I don’t think it should be entertaining these ideas of long-term ring-fencing.’ 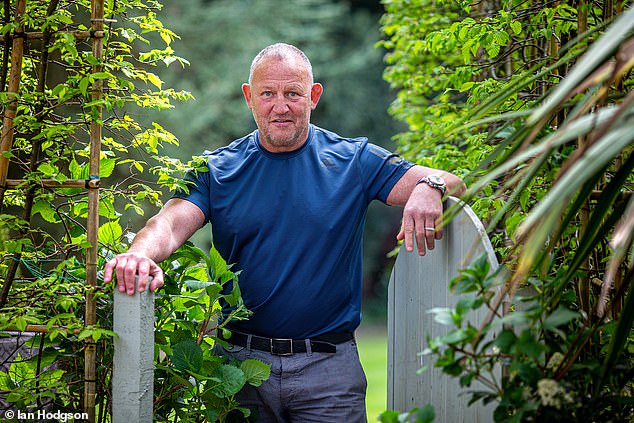 He grew up with siblings on a council estate, before making a fortune in printing and property

Despite living in a plush home built by a former tea merchant, stocked with Chanel-branded mugs, Diamond’s roots are very much working class. He grew up with four siblings on a council estate, before making his fortune in printing and property.

Rugby was his sidekick. Other than a couple of vintage matchday programmes, there is little memorabilia on show to mark Diamond’s time as a player, coach, shareholder and CEO. Few people share his first-hand experience of the inner sanctum of English club rugby. When he speaks, it is worth listening.

‘When you’re cocooned in the Premiership for as long as I was, you forget that rugby isn’t just confined to 12 teams,’ he adds. ‘It’s been a breath of fresh air to look around at what’s going on in France, Japan, the southern hemisphere.

‘France doesn’t have any plans to scrap relegation and look at how much the value of their TV increased recently. What happened to the Premiership’s latest TV deal? They didn’t manage to add a bean to it. If I were in charge of BT Sport, I wouldn’t want them to ring-fence the league. PRL will never get a massive new TV deal, like they got in France, if they introduce ringfencing.

‘In the Premiership, there’s a one in 12 chance of getting relegated. If you go down, your crowds drop and your commercial revenues drop. Club owners want to remove that risk, because of self-interest, but what about the competition? 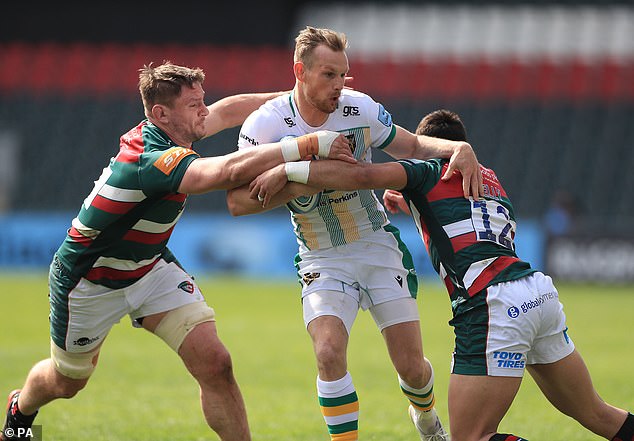 ‘My marketing team at Sale was a highly-motivated Faf de Klerk and Co. A group of guys with a target. I was in one relegation fight at Sale and the crowds picked up for those games because people enjoyed the drama and the competition.

‘If these administrators think crowds will rush back to watch Worcester getting beat every week, like they are at the minute, then they’re kidding themselves. I want a pair of those rose-tinted glasses. If there’s nothing to play for at the end of the season, that will lead to mediocrity. It ceases to be real sport at that point.

‘Yeah, people might argue that the same team goes up and down. So be it, but at least there are no dead rubber games. Crowds won’t come. Of course, everyone’s been missing the freedom of going for a day out with their mates, but they’ve also got used to watching games on TV. You have to build your crowds back up.’

Until now, Diamond has kept his powder dry, turning down interview requests since he left Sale in January. He has taken a step back from the sport, but his passion remains.

‘The reason England get to World Cup finals is because the Premiership provided them with quality players,’ he says. ‘If the Premiership goes its own way, I think it will become a stagnant competition.

‘What’s more, a lot of Premiership coaches — Rob Baxter, Pat Lam — use the Championship to recruit talent. If the Premiership is ring-fenced, that pool of talent will deteriorate. The academy systems aren’t good enough on their own to prop things up.

‘Sale didn’t just magic up Tom Curry in the academy. He played for Sale FC, against men, in a lower-league competition, which would deteriorate because of ringfencing. Looking at the bigger picture, would it hurt England’s chances of winning the World Cup? Yeah, of course it would. 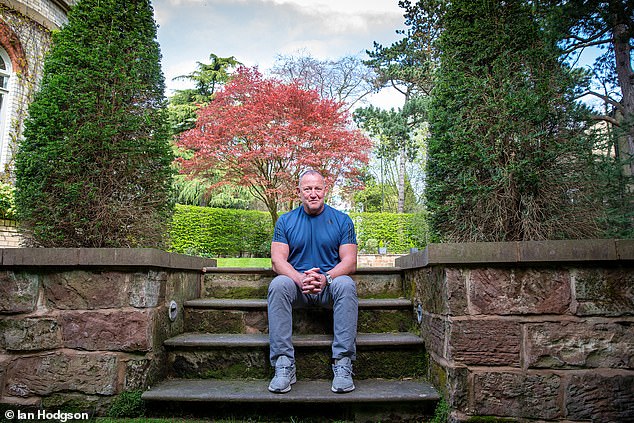 ‘Do those European Super League clubs give a s**t about the FA? No, they don’t. Is the Premiership going that way where it doesn’t care about the RFU? No, because it’s all pretty incestuous with board members moving back and forth, but they need to bang their heads together and work out what’s best for the game.

‘The RFU let go of its right to the players when the game went professional 26 years ago. The Premiership has the right to the players now, and that’s PRL’s biggest strength, but the problem is they don’t want to buddy up with the Championship. The RFU needs to take a good look at it and ask, ‘Do we really want this one league, out on its own in space?’ No, we don’t. Now try making a headline out of that!’

During his time in the Sale hot seat, Diamond learnt all about making headlines. Never short of an opinion, he spends an hour chewing the fat about the sport he loves. He built a home bar during lockdown, fitted with a widescreen TV to keep abreast of the rugby.

Most impressive player? ‘Marcus Smith… best 10 in the country’. Views on Eddie Jones? ‘The right man for the job, but he’s shown too much loyalty to a few players.’ Opinion on Premiership clubs refusing to release players early for the Lions? ‘The clubs should be bending over backwards for the Lions.’

Those are some of his views, in a nutshell, but what about his own plans for the future?

‘I spent the last 10 years at Sale, 365 days a year, 18 hours a day,’ he says. ‘I probably did a few too many jobs there, with the benefit of hindsight, and you don’t spend much time on your home life. The last three or four months have given me some time to catch up on that. Decorating, gardening, getting a holiday, trying and failing at golf! I’m feeling a lot more relaxed now.

‘I built up big friendships at Sale and, although I’ll pick up those relationships again, they sort of end the moment you walk out the door. That was a hurdle to get over, but I’m getting over it. I’ve not got an agent ringing around for me looking for jobs, but I would like to get back into rugby at some stage.

‘I met some interesting people in Dubai. It wasn’t all cocktails in the sun. It was a business trip, as well as pleasure. I met up with a couple of investment funds from America who are looking at buying into a rugby business, so that’s an avenue I’m exploring. I don’t know what the appetite is to sell in the Premiership at the moment, but we’ll see how things look at the end of the season. Watch this space.

‘In the meantime, I’ll happily keep working on my golf swing. I’ve even done a couple of broadcasting lessons to help me with a few TV appearances. Always learning. The teacher is lovely. She can’t help with the s**t that comes out of my mouth… but she can help with the way I say it!’