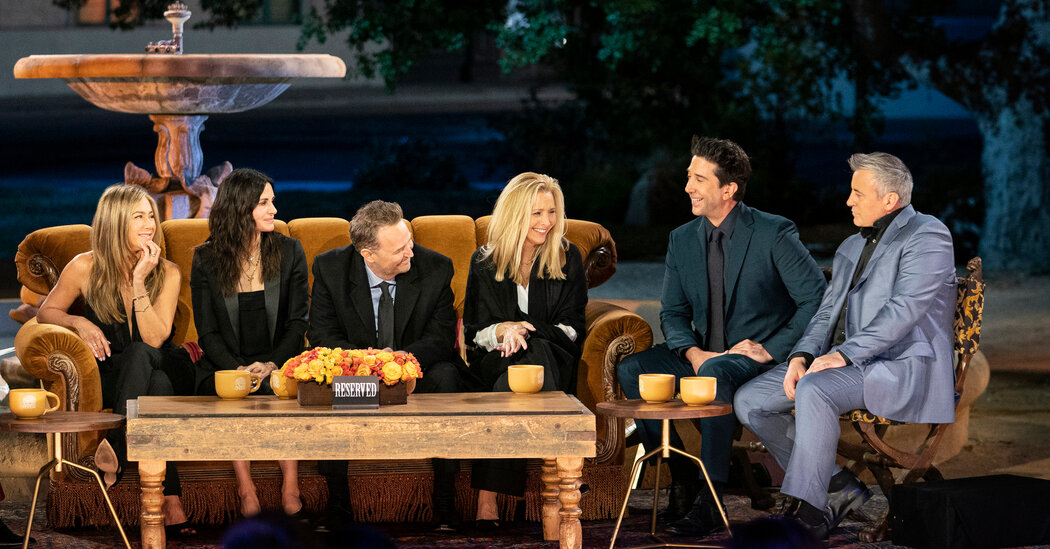 “Friends,” after all, did not get where it did simply on catchphrases and haircuts. The cast’s reading from “The One With the Jellyfish” — in which Chandler, Joey and Monica confess to using the (mythical) pee-on-it trick to kill the pain of a sea-creature sting — shows the talent it takes to wring the laughs out of a comedy scene that’s written like a survivor’s horror drama. In a breakdown of the couch-moving sequence, a scene with scant dialogue becomes a classic on the strength of Schwimmer’s delivery of the two syllables, “Pi-vot!”

If the whole affair feels a touch less special, it’s because of a glut in the nostalgia market. It was announced, with fanfare and a reportedly hefty price tag, in February 2020, just before the pandemic lockdowns. Since then, a slew of beloved series — “Community,” “The Office,” “E.R.,” “Parks and Recreation” — have reunited over Zoom and on TV, for charity or just because they could.

But this reunion does make a fitting Gen X bookend to the reunion of “The Real World: New York” earlier this year. (You could think of “Friends,” which premiered in 1994, as kind of a scripted answer to the original “Real World,” which aired two years earlier.) That follow-up was more willing to dig into the effects of time, what has and hasn’t aged well in the original season and the cast’s flaws and challenges (including clashes on the set of the new show).

“Friends: The Reunion” is not reality TV, nor a news report. So there’s plenty you won’t hear about: the contentious contract negotiations; criticisms of the show for casting mainly white actors; personal or health issues. When an audience member asks what the actors disliked about making the show, Corden jokingly chides, “Way to keep it positive!” (The collective answer throws Marcel the monkey under the bus.)

But then, nobody watched “Friends” to be reminded of the world’s woes. Those are what come after the finale, when you move out of that starter apartment and take on a mortgage. This was about seeing the stars together, supposedly for the last time — “We’re not doing this again in 15 years,” Courteney Cox says. After which the reruns, where the past stays frozen in place, will be there for you.