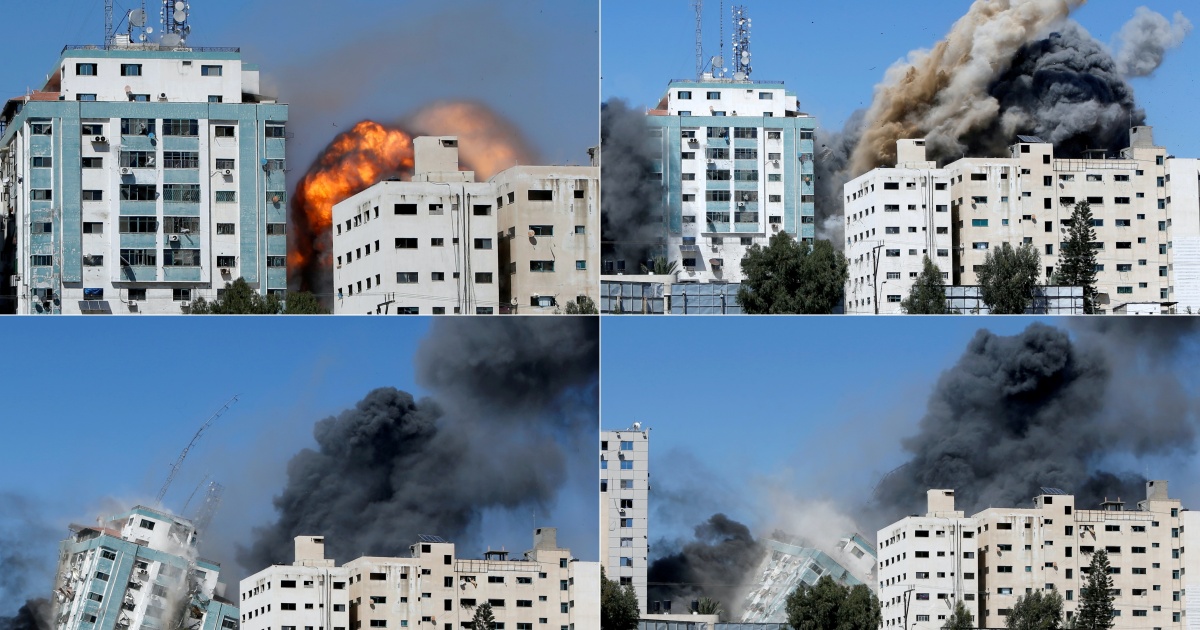 On May 14, the official Twitter account of the Israeli military tweeted a “pop quiz” video, inviting viewers to “imagine” that they themselves were the Israeli armed forces deciding what to do in response to rocket fire from the Gaza Strip. The answer options were: “A. Nothing[.] Allow terrorists to destroy Israeli cities,” or “B. Target the terrorists who fire the rockets.”

According to the military, there was “only one right answer”: option B. In reality, a more accurate answer would have been something like: “C. Bomb Gaza to smithereens and massacre entire Palestinian families in ‘response’ to rockets that are not even capable of destroying Israeli cities – and that are only being fired at Israel because Israel has spent the past 73 years massacring and otherwise tormenting Palestinians.”

Nearly 250 Palestinians have thus far been killed, including 66 children, in the Israeli assault that began on May 10. As usual, the Israeli military Twitter account has served as a valuable weapon for conducting a parallel propaganda war to bolster the physical one.

The account, which currently boasts 1.5 million followers, is largely dedicated to inverting the roles of victimiser and victim to portray Israel as the latter – in theory a formidable task, given that “victims” do not usually violently erect their country on other people’s land and subject the rightful inhabitants to ethnic cleansing and slaughter.

The completely disproportionate destruction in Israel and Gaza means that the Israeli military is often reduced to tweeting about air raid sirens, with helpful colourful maps: “Every red dot marks sirens in Israel over the last 30 minutes: Israel is under attack.”

If the red dots were not traumatising enough, a tweet on May 11 encouraged Twitter users to listen to an audio clip of “SIRENS IN TEL AVIV” and to “imagine hearing this sound and having seconds to run for your life.” On May 12, another tweet announced: “It’s 3 AM and more rockets are being fired at Tel Aviv. Families are being woken up & rushed to bomb shelters.”

Never mind the lack of air raid sirens or bomb shelters in Gaza. Imagine being, say, six-year-old Suzy Eshkuntana, pulled from the rubble of her Gaza City home seven hours after an Israeli air attack killed her mother and four siblings. Or imagine being Eman Basher, a teacher with the United Nations Relief and Works Agency, who on May 13 tweeted: “Tonight, I put the kids to sleep in our bedroom. So that when we die, we die together and no one would live to mourn the loss of one another.”

The Israeli army is all about “imagining”, but only from Israel’s invented perspective. Another epically sensational video tweet, titled “Imagine This Was Your Reality”, purports to show how “ALL OF ISRAEL IS UNDER FIRE” via a montage of rockets, flames, and people running. The video incites viewers to “imagine if it was Washington”; “Imagine if it was Paris”; “Imagine if it was London”.

Meanwhile, this same army continues to inflict an apocalypse of cinematic proportions upon the Gaza Strip. Imagining Israel as the victim requires a good deal of imagination, indeed.

Occasionally, the army urges the Twittersphere to imagine events through an alleged Palestinian perspective. Its May 18 video tweet, “Hamas’ Use of Human Shields, Explained,” begins: “Imagine your home surrounded by terrorism” – something that presumably does not require a stretch of the imagination for Gaza residents, watching as Israel flattens high-rise buildings around them.

According to the beyond-tiresome Israeli narrative, Palestinian “terrorists” embed in civilian areas and are, therefore, to blame when Israel wipes out civilians. To be sure, the army regularly provides rigorous evidence in support of this narrative – as would be expected of any entity with such technological prowess.

For example, a now-deleted version of the “Hamas’ Use of Human Shields, Explained” video included footage of what Israel claimed were Hamas rockets embedded in civilian neighbourhoods in Gaza. But as Reuters journalist Raphael Satter pointed out, the footage was actually of a “2018 Israeli training exercise” in – guess where – Israel! (Satter went on to remark that the fact that the Israeli military has “trouble distinguishing Hamas rockets from Israeli rockets does not inspire confidence in the quality of their intelligence”.)

A similar digital snafu befell the state of Israel in May 2010 when the army killed eight Turkish activists and one Turkish-American on board the Mavi Marmara, the flagship of a flotilla seeking to deliver aid to Gaza. As per the official Israeli line, the Israeli commandos who had descended from helicopters shooting people were the real victims of the episode, and the Israeli Foreign Ministry went about uploading photographs of the “weapons” allegedly found on board, including marbles, keffiyehs, kitchen knives, and slingshots.

This slingshot photo was initially specified as having been taken in February of 2006, ie more than four years before the airborne commandos were brutally assaulted in the middle of the sea by people delivering baby incubators and medicine to a besieged coastal enclave. Granted, when your whole victimhood narrative is a lie in the first place, what need is there to be meticulous about the particulars?

In the end, if you are the Israeli army and you have got an internet connection, there is pretty much nothing you cannot argue. Were the army in charge of tweeting about other varieties of current events, we would likely hear of deer assaulting hunting rifles, snorkelers’ legs attacking sharks, chainsaws being victimised by tree trunks, mice being eaten by cheese, and so on.

As for the role of journalists in the transmission of the Israeli propaganda – something the Western corporate media has long been willfully guilty of – it has been widely claimed that Israel’s military duped the foreign press into reporting a ground invasion of Gaza on May 13 in order to propel Hamas fighters into tunnels targeted for massive attacks.

Of course, there are also other options for dealing with the media – like obliterating their offices in Gaza, as it happened on May 15. (Imagine if it was Washington, Paris, or London.)

The Israeli army’s Twitter explanation for the attack on the 11-storey building, which destroyed the offices of Al Jazeera and The Associated Press as well as numerous civilian residences, was that it was “an important base of operations for Hamas’ military intel”.

More on point was the prominent satirical outlet The Onion, which called on Israel to reduce The Onion’s own international offices “to charred rubble as soon as possible,” lest there were “any Hamas agents hiding out there”. The article urged Israel “not to give any advance warning to the tenants located in these buildings”, concluding that “if carpet bombing the entire city block in which our offices are located will finally put an end to this cycle of violence, it will have been well worth any inconvenience”.

Now, as the Israeli army continues to wage physical and digital war – annihilating the truth in the process – it is time to reduce its narrative to rubble.