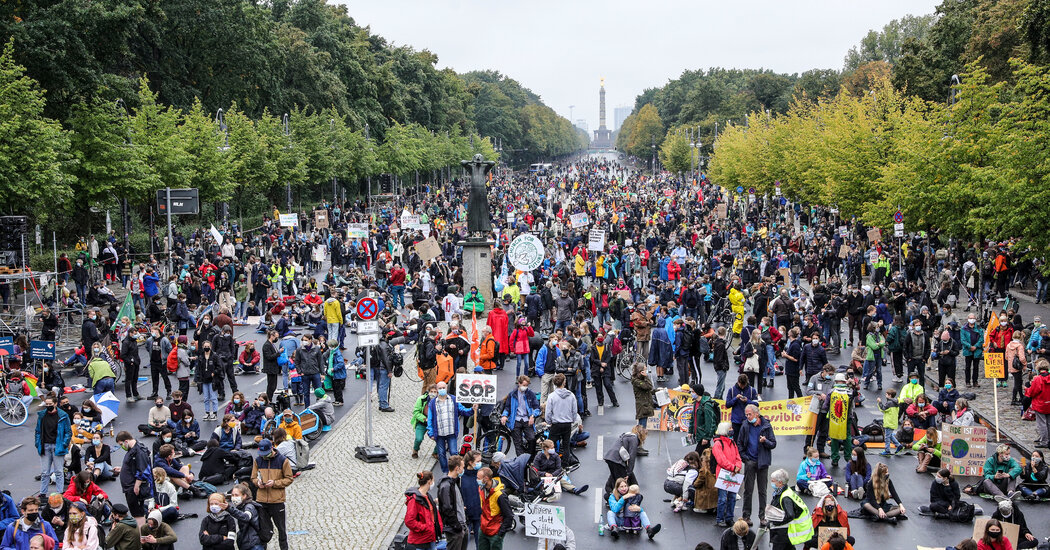 BERLIN — Germany’s highest court ordered the government to expand a 2019 law aimed at bringing the country’s carbon emissions down to nearly zero by 2050, ruling on Thursday that the legislation did not go far enough to ensure that future generations would be protected.

The decision by the country’s Federal Constitutional Court came as a rebuke to Chancellor Angela Merkel’s government, which drafted the law but only included detailed goals to reduce emissions through 2030.

“The appellants, some of whom are still very young, have had their liberties violated by the challenged provisions,” the ruling said, ordering the government to revise the law by the end of next year to clarify and specify targets that reach beyond 2030. “To preserve fundamental liberty, the legislature should have made provisions to mitigate this burden.”

The law under scrutiny in the court case aimed at meeting Germany’s carbon emission targets under the Paris Agreement, a pact by 189 countries to try to prevent the world’s temperature from rising. The German law included a raft of measures such as a $60 billion spending package, a fee system for carbon emissions and taxes to make flying more expensive.

But the law only stipulated how reductions should be reached over the coming decade. Decisions about how and how much to reduce carbon emissions between 2031 to 2050 were left open, to be decided in 2025.

In their suit, the climate activists had charged that by failing to lay out a long-term strategy with clear targets for reductions through when Germany aims to be carbon-neutral, the government was effectively kicking the can down the road and risking the freedom of future generations, who would have to live with the consequences.

Young climate activists, nine of whom had challenged the law, welcomed the decision to side with their concerns that the failure to pass stringent enough legislation today will endanger their lives when they reach adulthood. The nine youths who were among those who brought the case ranged in age from 15-24.

Other activists also celebrated the court’s focus on the future as a watershed moment in the fight against climate change.

“Tomorrow’s freedom and fundamental rights must not be burned up by our emissions today — there is an obligation to ensure this protection through a science-based climate protection law,” said Christoph Bals, executive director of the Germanwatch environmental group.

“This ruling will be a key reference point for all climate lawsuits pending around the world,” he said.

Members of the Fridays for Future organization celebrated the ruling as “a huge win for the climate movement.” Several of the young people who had brought the case to court were members of that group.

One of them, Luisa Neubauer, 24, welcomed the court’s recognition that “climate justice is a fundamental right,” adding in a comment on Twitter that, “Today’s inaction must not harm our freedom and rights in the future.”

The ruling could have political repercussions ahead of a Sept. 26 election that will chose a new Parliament and a successor to Ms. Merkel, who is leaving politics after 16 years as German chancellor.

During her four terms in office, Ms. Merkel sought to highlight the importance of combating climate change, but her governments’ policies often fell short of activists’ demands.

The 2019 law was the product of wrangling between Ms. Merkel’s conservative Christian Democrats and their partners in government, the center-left Social Democrats, who seized the opportunity of the ruling for positioning themselves ahead of the upcoming campaign.

Olaf Scholz, Germany’s finance minister who is the Social Democratic candidate to become chancellor, blamed foot-dragging by conservatives for the court’s ruling. He chided the economy minister, Peter Altmaier, in an exchange over Twitter for failing to go far enough in the initial legislation.

“As I remember, it was you and your party that prevented in the first place what the Constitutional Court is now demanding,” Mr. Scholz said. “But we can fix that. Are you with us?”

But it was the Greens, an opposition party, that could benefit most from the ruling given its popularity among young people. The party has seen its support explode recently, with polls showing it in a neck-and-neck race for the lead alongside of the conservatives.

Annalena Baerbock, the Greens candidate for chancellor, welcomed the ruling as a “historic decision” and called for the law to be overhauled quickly.

“Climate protection protects our freedom and the freedom of our children and grandchildren,” she wrote on Twitter. “The coming years are decisive for consequent action.”

The impact of failing to take action was brought home through a report released in the southern state of Bavaria on Thursday that warned the region’s five alpine glaciers were melting more quickly than anticipated.

“The days of Bavaria’s glaciers are numbered, earlier than we previously believed,” said Thorsten Glauber the state’s environment minister, presenting a study that measured the rate at which the alpine accumulations of ice and snow are melting. One of the glaciers on the northern face of the country’s highest peak, the Zugspitze, is losing 250 liters or 66 gallons of water every 30 seconds, it found.

Unless action is taken to speed up Germany’s attempt to reach zero emissions, Mr. Glauber said, “The last alpine glacier in Bavaria could disappear within 10 years.”