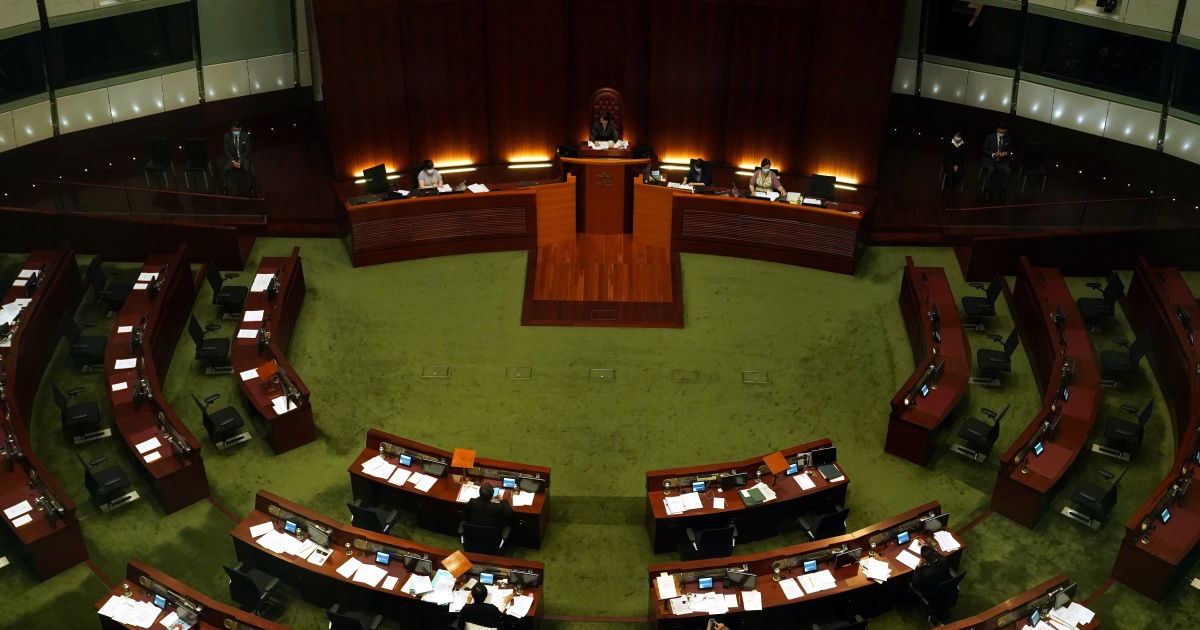 Changes approved in opposition-devoid body reduce the number of directly elected seats and will freeze out most China critics.

Hong Kong’s opposition-devoid legislature has approved the biggest overhaul of its political system since British rule, a decisive step to assert Beijing’s authority over the autonomous city.

The measures were passed on Thursday with 40 votes in favour and just two against. The pro-Beijing government has faced no opposition in the legislature since last year, when China disqualified some pro-democracy politicians and others resigned in protest.

The changes will reduce the proportion of seats in the legislature that are filled by direct elections from half to less than a quarter. A new body will be empowered to vet candidates and bar those deemed insufficiently patriotic towards China from standing.

“These 600-or-so pages of the legislation come down to just a few words: patriots ruling Hong Kong,” said Peter Shiu, a pro-Beijing lawmaker.

Most of the changes were announced by China in March, though Hong Kong authorities later contributed further details, such as redrawing constituency boundaries and criminalising calls for ballots to be left blank.

Chinese authorities have said the electoral shake-up is aimed at getting rid of “loopholes and deficiencies” that threatened national security during anti-government unrest in 2019, and ensure only “patriots” run the city.

The legislature will increase in size to 90 seats from 70. The number of seats filled by direct election will decrease to 20 from 35. Forty seats will be filled by an election committee, which is also responsible for choosing the chief executive.

The new vetting committee empowered to disqualify candidates will work with national security authorities to ensure those standing are loyal to Beijing.

Elections for the election committee are set for September 19, and for the legislature three months later. The committee will choose a chief executive on March 27, 2022.

Hong Kong’s Chief Executive Carrie Lam has not made clear whether she will seek re-election. In 2019, she faced the largest and most violent wave of anti-government protests since the handover from British rule in 1997, after proposing a bill to allow extraditions to mainland China.

Beijing had promised universal suffrage as an ultimate goal for Hong Kong in its mini-constitution, the Basic Law, which also states the city has wide-ranging autonomy from the Chinese government.

Pro-democracy campaigners and Western countries say the political overhaul moves the city in the opposite direction, leaving the democratic opposition with the most limited space it has had since the handover.

Since China imposed a national security law in 2020 to criminalise what it considers subversion, secessionism, terrorism or collusion with foreign forces, most pro-democracy activists and politicians have found themselves ensnared by it or arrested for other reasons.

The Hong Kong Alliance, which has organised the annual vigil for more than 30 years, said police cited the continuing coronavirus pandemic in their refusal.

“We will continue to fight for the right to mourn June 4 lawfully,” the alliance said, adding it planned to appeal.