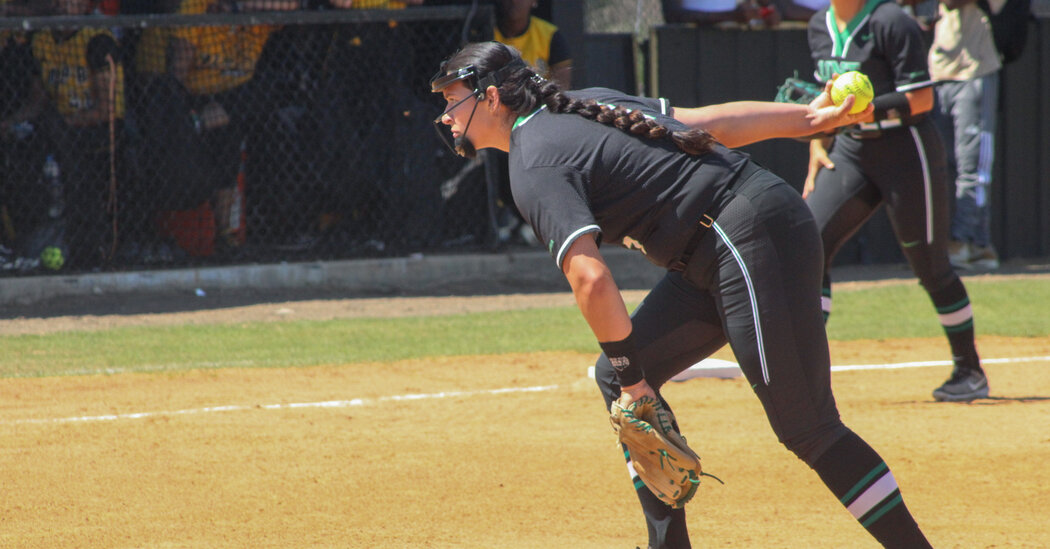 It is the dream of every pitcher. All the opposing batters retired in order. A perfect game.

But is a perfect game really perfect? After all, a few players will have gotten at least some bat on the ball, even if it was just a pop-up or a groundout.

Hope Trautwein of the University of North Texas softball team did things a little more perfectly on Sunday. In a seven-inning game against the University of Arkansas at Pine Bluff she faced 21 batters and struck all of them out. No one even put a ball in play.

And somehow, she didn’t really notice.

“I knew it was a perfect game,” she said in an interview on Tuesday. “There’s that thing about you don’t say it’s a perfect game, but I could hear my teammates behind me. They were saying ‘don’t jinx it.’

“But I guess I didn’t really register that all of the outs were strikeouts until the end of the game.”

It was the first seven-inning perfect game with 21 strikeouts in N.C.A.A. Division I history.

It was also the third college no-hitter for Trautwein. More remarkably, she also struck out 21 batters in a seven-inning game on Feb. 13 at Southeastern Louisiana. But in that game she also gave up five hits, two walks and two runs. Only two other pitchers in Division I before Trautwein had matched the 21-strikeout feat, the N.C.A.A. reported.

“My previous no-hitters I’ve been super, super anxious,” she said. “Is this going to be the pitch to break it, are they finally going to get a hit or reach base. I wasn’t like that this time. I was very confident.”

Trautwein started playing softball at 10 and pitching at 12. Striking out opposing batters has always been a big part of her game, but even in Little League she had never had an all-strikeout perfect game.

Like a lot of softball pitchers she is tall. “I am a pretty big girl,” she said. “I was bigger than all my teammates growing up. I’m 5-11 and 6 foot in cleats, so I’ve always had that raw athletic talent and been stronger than all the girls on my team. In Little League, you either struck out or got hit by a pitch.”

In a barnstorming game, Satchel Paige once legendarily told his fielders to head to the bench, then struck out the side. Trautwein could have done the same, but for seven straight innings. The seven fielders behind her provided vocal and moral support, she said, but never made a play.

It is not as if the players for Pine Bluff didn’t take their cuts; Trautwein struck out 17 batters swinging and just four looking. The first three innings were especially futile for Pine Bluff: Each of the first nine batters struck out on three pitches. “The second time around the lineup, it was a little bit more competitive,” Trautwein said, charitably.

The game was not televised, so only a select group of 75 hard-core fans can say they were there when it happened.

“We can compete with the top five conference teams,” Trautwein said. “That’s the next step.” (It’s been a tougher year for Pine Bluff, which is 1-19.)

As for the last few days, “it’s been insane,” Trautwein said. “Oh my gosh, Lauren Chamberlain just quoted my tweet,” she said of the Division I career leader in home runs.

Trautwein, now 6-3 on the season, has another year of eligibility. “I’m chasing the strikeout record for North Texas,” she said. “It’s 712, I think I’m sitting right at 580.” Six or seven more 21-strikeout games and she will be there.