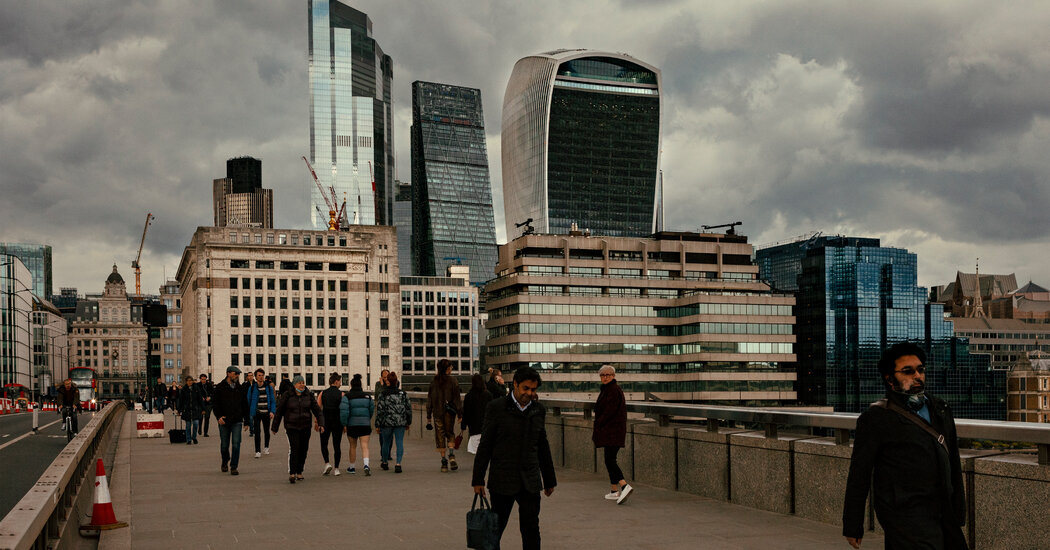 LONDON — Coming out of Brexit this year, Britain’s government needed a new blueprint for the future of the nation’s financial services as cities like Amsterdam and Paris vied to become Europe’s next capital of investment and banking.

For some, the answer was Deliveroo, a London-based food delivery company with 100,000 riders on motor scooters and bicycles. Although it lost more than 226 million pounds (nearly $310 million) last year, Deliveroo offered the raw promise of many fast-growing tech start-ups — and it became a symbol of Britain’s new ambitions by deciding to go public and list its shares not in New York but on the London Stock Exchange.

It was a false start. Deliveroo has since been called “the worst I.P.O. in London’s history.” On the first day of trading, March 31, the shares dropped 26 percent below the initial public offering price. (It has gotten worse.)

The flop has put a dent in the image of the City of London — the geographical and metaphorical name for Britain’s financial hub — as it tries to recover from the country’s departure from the European Union. Some impacts from Brexit were immediate: On the first working day of 2021, trading in European shares shifted from venues in London to major cities in the bloc. Then London’s share of euro-denominated derivatives trading dropped sharply. There’s anxiety over what could go next.

The government has begun hunting for ideas to bolster London’s reputation as a global finance center, in a series of reviews and consultations on a variety of issues, including I.P.O.s and trading regulations.

For many, the changes can’t come soon enough.

“The United Kingdom is not going to sit still and watch its financial services move across” to other European cities, said Alasdair Haynes, the founder of Aquis, a trading venue and stock exchange for equities in London. This will make the next three or four years exciting, he said.

But this optimism isn’t universal. The prospects of a warm and close relationship between Britain and the European Union have considerably dimmed. The two sides recently finished negotiations on a memorandum of understanding to establish a forum to discuss financial regulation, but the forum is voluntary, and the document has yet to be signed.

The European Union has made no secret of its plans to build up its own capital markets, which could flourish if London is denied access. The “mood music in the E.U.,” said Andrew Pilgrim, who leads the U.K. government and financial services team at EY, is focused on having autonomy over its own financial services and not being reliant on Britain.

For Britain, the appeal of writing its own financial rules is growing. The trick is luring more business without lowering London’s regulatory standards, which many consider a powerful draw. A recent survey of global senior financial executives by Duff & Phelps found that fewer see London as the world’s leading financial center but that it topped the leader board for regulatory environment.

Here are some of the plans.

“I want to make the United Kingdom the best place in the world for high-growth, innovative companies,” Mr. Sunak told Parliament on March 3, the same day a review commissioned by the government recommended changes designed to encourage tech companies to go public in London. It proposed ideas, common in New York, that would let founders keep more control of their company after they began selling shares.

For example: allowing companies with two classes of shares and different voting rights (like Facebook) to list in the “premium” section of the London Stock Exchange, which could pave the way for them to be included in benchmark indexes. Or: allowing a company to go public while selling a smaller proportion of its shares than the current rules require.

The timing of Deliveroo’s I.P.O. wasn’t a coincidence. It listed with dual-class shares that give its co-founder William Shu more than half of the voting rights for three years — a structure set to “closely align” with the review’s recommendations, the company said.

But the idea may be a nonstarter among some of London’s institutional investors. Deliveroo flopped partly because they balked at the offer of shares with minimal voting rights.

But others are excited by the ideas in the review, which was conducted by Jonathan Hill, a former European commissioner for financial services. Among them are Mr. Haynes, whose company, Aquis, acquired a stock exchange last year to compete with the London Stock Exchange.

“I’m hugely supportive of what Lord Hill has done,” said Mr. Haynes, who wants his exchange to one day become “the Nasdaq of Europe.” It is trying to entice companies with benefits such as a ban on short-selling (a practice in which investors bet against the price of a stock) on some of the larger companies that list with it. The Nasdaq has a coveted reputation for listing tech giants, including Microsoft, Apple and Facebook.

Mr. Hill’s review also urges London to become a more inviting home for special purpose acquisition companies, or blank-check companies, the latest craze in financial markets, having taken off with investors and celebrities alike. SPACs are public shell companies that list on an exchange and then hunt for private companies to buy.

London has been left behind in the SPAC fervor. Last year, 248 SPACs listed in New York, and just four in London, according to data by Dealogic. In March, Cazoo, a British used car retailer, announced that it was going public via a SPAC in New York.

Already there are signs that Amsterdam could steal the lead in this booming business for Europe. There have been two SPACs each in London and Amsterdam this year, but the value of the listings in Amsterdam are five times that of London.

Britain’s financial regulatory agency said it would start consultations on SPACs soon and aim to have new rules in place by the summer.

A future in fintech

London already has a reputation for producing high-flying financial technology companies such as Revolut and Monzo, which both expanded into the United States, and Wise (formerly Transferwise), which was valued at $5 billion last year. All three are so-called challenger banks, which offer financial services through apps without the need for brick-and-mortar branches.

The government clearly wants to build on this momentum. In February, it published an independent review of the fintech industry, and it is already acting on some of its recommendations, including setting up a fast-track visa process for people interested in coming to Britain to work for fintech companies. The review also recommended a program that would give regulatory blessing to small companies experimenting with new fintech offerings and services.

As Britain gears up to host the United Nations Climate Change Conference in November, the government wants to transform London into a global center for investors who want their money to go into green and sustainable initiatives.

Already, Mr. Sunak has said the Treasury will require large companies and financial firms to disclose, by 2025, any risks to their businesses associated with climate change and is working on a taxonomy to define what really counts as “green.” Next, millions of pounds will be invested in new research centers to provide climate and environmental data to financial companies.

The government is also seeking to regain ground lost to Germany, France and other European countries on the issuing of green bonds to finance projects to tackle climate change.

London’s finance industry isn’t in danger of imminent collapse, but because of Brexit a cornerstone of the British economy isn’t looking as formidable as it once did. And as London tries to keep up with New York, it is looking over its shoulders at the financial technology coming out of Asia.

The government has continuously billed Brexit as an opportunity to do more business with countries outside of the European Union. This will be essential as international companies begin to ask whether they want to base their European business in London or elsewhere.

When it comes to the future of Britain, it’s “almost a back-to-the-future approach of London as an international center as opposed to being an international and European center,” said Miles Celic, the chief executive of the CityUK, which represents the industry. “It’s doubling down on that international business.”