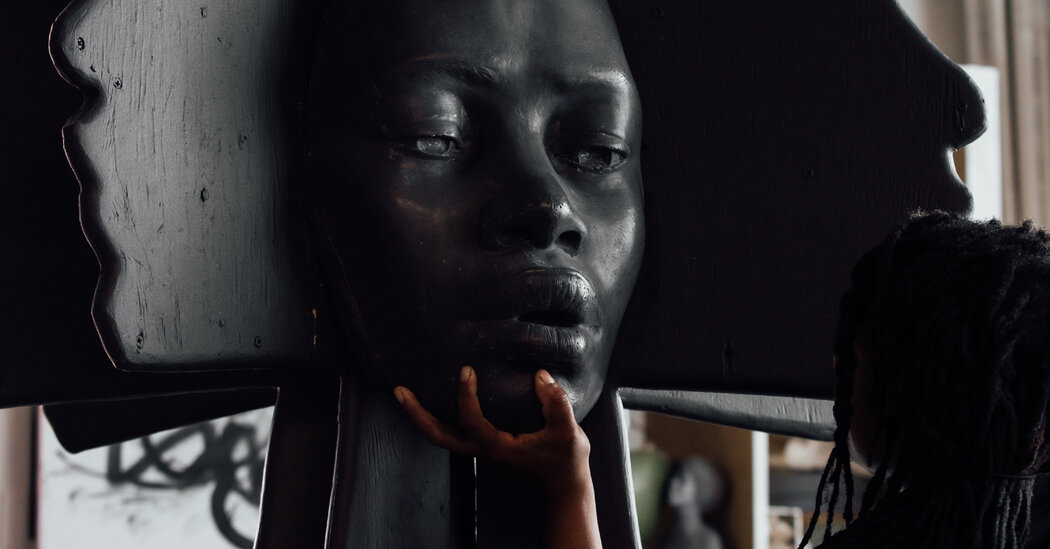 The morning in April before a Minneapolis jury found the former police officer Derek Chauvin guilty of murdering George Floyd, Leesa Kelly woke up from a nightmare. As she had done many times over the past year, she cried out feelings of anger and hopelessness.

Kelly, who runs a self-help blog for women of color, had marched and helped fund-raise in the city since last May, when demonstrations erupted after Chauvin was captured on film pressing his knee into Floyd’s neck, a deadly act that moved millions of people to march in what would be the biggest racial justice protests in decades.

But “nothing seemed to quell this feeling inside me: just deep despair and anger,” she said. From that unsettled place emerged an idea that would become Memorialize the Movement, a project to preserve and exhibit the plywood sheets that business owners had affixed to their storefronts out of concern about vandalism by marchers, many of whom instead transformed the sheets into art: murals and other works inspired by the moment, applied in paint, spray paint, pen, pencil, marker and chalk. From May 21 to 23, many will be on view in a large-scale exhibition called “Justice for George: Messages From the People” in Phelps Field Park, steps from where George Floyd was killed.

Kelly recognized that the boards told a story — of George Floyd’s life and death, and how they reverberated across her community and the country.

“That’s why it’s so important that they be preserved,” said Kelly, who had little connection with the arts world before this project. “Because this is Black history, and not just Black history, it’s American history.”

Motivated by a similar impulse, other groups in New York and Chicago are also gathering and transforming these symbols of unrest into objects that bear witness to a staggering year — hoping to answer the question, in their own ways, of how to memorialize what their cities endured while stitching together a national portrait.

Kelly, the group Save the Boards Minneapolis and volunteers have been collecting the pieces for nearly a year. Locating them and identifying their creators has been a scattershot undertaking. Some of the artists signed their often elaborate murals, adding their websites or Instagram handles, but others didn’t know to sign their names or wanted to remain anonymous. Also, early on, Kelly didn’t know what store owners had planned for their boards, or how receptive they’d be to having them collected.

Kelly passed around some quickly made fliers in mid-June and knocked door to door on major streets. “Most of these people had never had to board up their businesses, and they didn’t know what to do with the murals,” she said.

At first, it was just Kelly and her boyfriend, armed with a drill, gloves and a Jeep, hauling the boards, which are often eight feet tall and can weigh 60 pounds each. After recruiting volunteers mostly though social media, they have been able to gather more than 800 boards so far.

The collected plywood sheets have been stored in a climate-controlled space, and volunteers from the Midwest Art Conservation Center, a nonprofit organization for the preservation of art and artifacts in the Twin Cities, have since joined to help maintain their condition, including mitigating issues of moisture and mold that affected the flaky, brittle material. “We’re just kind of going to let them live out their natural lives,” Kelly said.

All the boards are also being digitally archived, with help from the urban art mapping team at the University of St. Thomas in the Twin Cities. The collection is expected to be accessible online by the end of the year.

Memorialize the Movement has longer-term plans after the show this month: to become a nonprofit, to establish a public memorial and to help the community learn about museum work and art handling. But those plans have been delayed by the death of Daunte Wright, a Black man who was fatally shot by a police officer in April in Brooklyn Center, Minn., about 10 miles from where Chauvin was on trial.

Last June, the dual crisis of police brutality and the pandemic was in stark relief to Neil Hamamoto, the founder of Worthless Studios, a nonprofit that supports the creation of public art, while he was driving around Manhattan, which he does often to clear his head.

“The city was very quiet, most of SoHo was completely boarded up,” said Hamamoto, who uses plywood material in his own art. “It just sort of clicked that all of these businesses were paying so much money to protect their windows, to protect the property inside, but what was going to happen to this material when they reopened? Where does this material go?” (During the peak protest months, a single board of plywood in New York cost more than $90, up from about $25 a board.) Hamamoto saw some wood on the street ready for disposal and decided to grab it, out of which grew the Plywood Protection Project.

Its aim, Hamamoto said, is to create safe, outdoor destinations for New Yorkers during the pandemic while prompting “emotionally and politically complex questions” around pain, anger, protest, property and memory. The place of national monuments in American history was top of mind, too, he said.

Worthless Studios collected more than 200 boards and initiated an open call for artists with the intention of selecting five. More than 150 applied. Those selected received studio space, tools, fabrication and installation assistance, along with a $2,000 stipend and a $500 material budget; the smallest installation required about 25 boards, while one of the larger works used closer to 60. This month, one sculpture was installed in each of New York’s five boroughs.

In Manhattan, “Be Heard,” by Behin Ha Design Studio, will be placed in Thomas Paine Park; “In honor of Black Lives Matter,” by KaN Landscape Design and Caroline Mardok, will go up in Poe Park in the Bronx; “Migeulito,” by Michael Zelehoski, in McCarren Park in Brooklyn; “Open Stage,” by Tony DiBernardo, at the Alice Austen House in Staten Island; and “RockIt Black,” by Tanda Francis, in Queensbridge Park in Queens. Most will be on view through Nov. 1.

Behrang Behin and Ann Ha, the founders of the architectural design practice Behin Ha Design Studio, whose contribution is a large-scale plywood megaphone, were drawn to the idea of working with materials that had played a role in socially and politically significant events. “As architects, we are accustomed to thinking of materials not just as physical matter used for construction, but also as existing in the cultural and social realms,” the duo said over email. In that sense, they thought of the plywood boards as “cultural artifacts rather than interchangeable materials.”

Francis has created several site-specific monumental public art pieces in New York, including “BIGGIE” (2014) and “Everyone Breaks” (2015-2016). Her work often addresses diasporic African people through large-scale masks and faces. She was home with her infant son when the events unfolded last spring and felt helpless that she couldn’t participate. It was very stressful, she said, “to understand where the country was in their mind.” And then this project came along. “OK, I have a direction, and I can use the actual material that was out of the streets and all that energy,” she remembered thinking.

Her sculpture is in the form of a column and includes polished concrete and aluminum mirror — “a stark black figure,” she said, that will be topped with a shining beacon that will point east, toward the expansive Queensbridge housing projects.

“RockIt Black” will soon contain a digital component that Francis plans to add to over time. At first, it will likely be a QR code that will lead to a curated musical experience. Later, she hopes to include, among other things, a list of Black-owned businesses or projects, connecting visitors to “people who are advancing Blackness.”

In Chicago, efforts to transform these plywood boards have also been underway since last year, when, ahead of the election, a dozen voting registration booths were made from about 150 graffitied boards collected from storefronts around the city. The booths, collectively called “Boards of Change,” were a partnership between local artists, the City of Chicago and When We All Vote, a nonprofit voting initiative chaired by Michelle Obama, Tom Hanks and Lin-Manuel Miranda, among others.

In the weeks leading up to the election, the booths were moved to different locations around Chicago and displayed in community meeting places like public libraries and galleries in neighborhoods with historically lower voter turnouts, mainly areas with a majority of Black or brown residents. Area leaders and artists spread the word.

The booths were designed by FCB Chicago, an advertising agency that partnered with Bobby Hughes, a Chicago-based craftsman, who helped construct them.

“Boards of Change” aimed “to bring the voices we heard during the George Floyd protests from the streets to the polls,” said Perri Irmer, the C.E.O. of the DuSable Museum for African American History, where the booths are being stored. There are plans to exhibit the booths after the museum reopens, where they will serve as a reminder of the 2020 protests and as a tool for future elections; QR codes stamped on the booths will remain active, allowing visitors to register for midterm and presidential elections to come.

Many of the boards used to construct the booths came from the Paint the City project, founded by the curator Missy Perkins and the artist Barrett Keithley. Paint the City, which came together in June, rallied more than 60 artists to apply art to boarded-up storefronts in over a dozen neighborhoods, paying the artists and providing them materials. An exhibition of more than 100 of these boards is planned for this summer at the DuSable Museum.

Perkins and Keithley, who have known each other for nearly a decade, had already been painting alleys in the city to provide safer thoroughfares. When Covid-19 hit along with the George Floyd protests, they quickly pivoted to focus on the boards.

“We were out there when things were going down,” Keithley said, recalling a few moments when clashes escalated around him while he was painting. But the demonstrators and police officers let him work. “I got a pass because I was putting up positive works of art,” he said. “That came kind of like a stamp of approval.”

“It was important because the time was important, plain and simple. They say artists speak to their time, and that’s what we did,” Keithley went on. “This is the medium that we chose to speak, and we were loud about it.”