The Lions will have a gleaming den to prowl around next month when they arrive in Jersey — a brand new £9million facility being built on the island to cater for their every need.

Today Sportsmail can take you behind the scenes of the 32,000 square foot training centre as the islanders work around the clock to put the finishing touches to their new toy which opens on May 28.

‘Bringing the Lions over is a dream. It’s a bit nuts really,’ says former Jersey Reds rugby coach Ben Harvey — the visionary behind and now the manager of Strive, the facility being built near the airport — from under his hard hat, just audible over the crashing and banging of construction work. 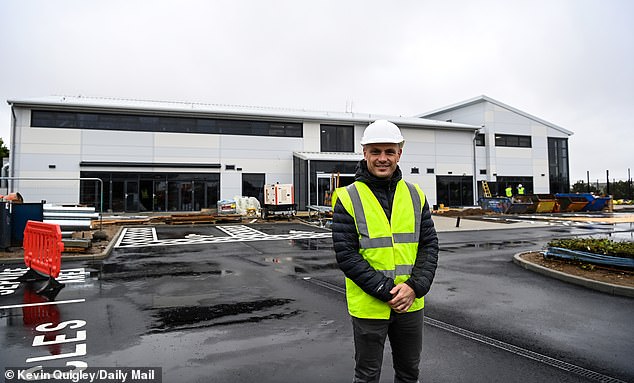 ‘I didn’t know much about rugby, but I know less about building! It’s been a huge learning curve. It’s very exciting, stressful, but it’s been amazing.’

The British & Irish Lions will want for nothing here.

Captain Alun Wyn Jones and his side will be able to train in two separate altitude chambers, which are sealed off, and alter oxygen and nitrogen levels to replicate the conditions they will face 1,753 metres above sea level in Johannesburg where four of their matches in South Africa will be.

Next to one is a 10,000 square-foot gym with six weight-lifting platforms and areas for sled-dragging and speed exercises. Outside Steve Tandy, the Lions defence coach, will be able to hone breakdown and tackle techniques on the artificial 3G pitch.

Former Commonwealth Games wrestler Paul Stridgeon, the Lions’ fitness guru, will be in his element too in the fully-fledged dojo for martial arts work as well as Pilates suite on the second floor — complete with a ‘living wall’ of plants. 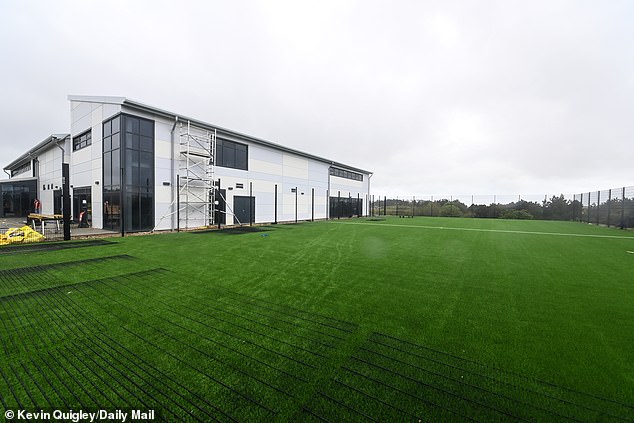 The finishing touches are being put to the 32,000 square foot training centre in Jersey

Analysts will love the lecture theatre complete with interactive screens for the tourists to plot South Africa’s demise.

Injured Lions will be able to do non-load-bearing running in a hydrotherapy pool, with in-built treadmill, and can be treated in the medical suite to be run by Manchester United’s former physio Jonny Picot — a Jerseyman himself.

Harvey hopes that the cryotherapy chamber he has bought from European Cup finalists Toulouse and swimming pool arrive in time. Currently they are stuck in the port of Granville, as the ongoing dispute between Jersey and France has disrupted shipping.

‘I’m hoping the spirit of rugby can get it over, and Granville rugby club can help out!’ says Harvey, originally from Redruth and an ex-fly-half who started at Bristol with England World Cup-winner Martin Corry.

‘We’re only doing this for fellow rugby players. It’s a complicated situation, so hopefully it can be sorted out.’

Harvey is the reason the Lions are coming on June 13 for two weeks before their pre-tour match against Japan in Edinburgh. 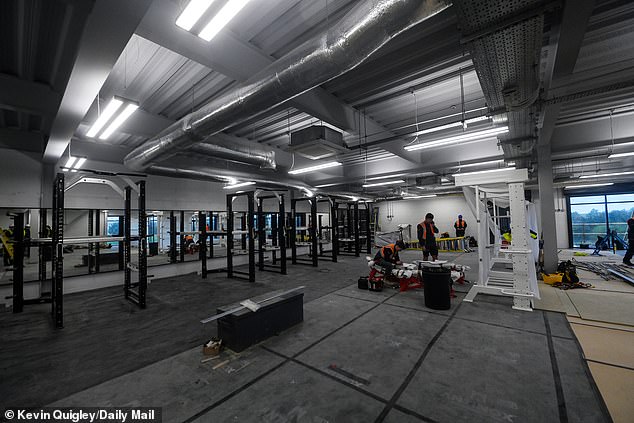 In January he made contact with Leicester coach Steve Borthwick — the Tigers will be coming for a pre-season camp this summer too — who put him in contact with Lions operations guru Alan Phillips and head coach Warren Gatland.

Used to wooing, having secured the multi-million-pound private investment for this place via several Dragons’ Den pitches over the last six years, he convinced the tourists that Jersey was the perfect spot. They beat Guernsey, whose government ministers were not keen to afford the Lions special treatment during Covid, to secure the visit and will pay £175,000 for the pleasure, £100,000 from Visit Jersey’s marketing budget.

‘I don’t know how many millions of pounds you’d have to spend to get the benefits we will for having the Lions here,’ Harvey says.

‘Suddenly Jersey is being put on the map. When I first had the idea six years ago I said it needed to be good enough to get the All Blacks here — that was my original statement. Being British, having the Lions will be a one up for me.

‘Reaching out to international teams, I wanted to give local girls and boys the knowledge and the belief they could go on to achieve.’

The Lions will be the first visitors at Strive, who hope to bring the All Blacks and Springboks here in November when they come to play autumn Tests in Europe. 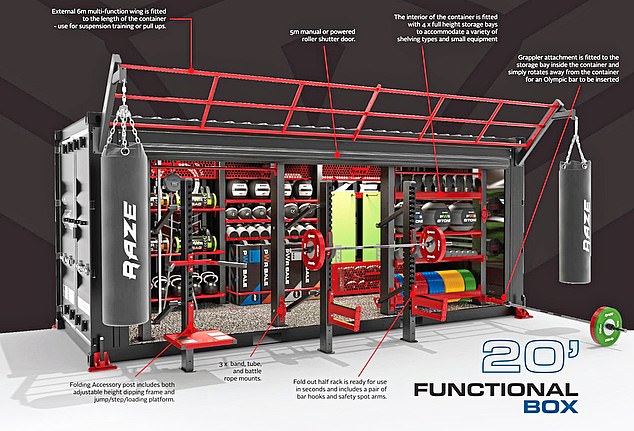 When they leave it will become an education centre for the island’s children and training centre for aspiring and elite athletes.

Harvey wants to unearth the next Jersey sporting star to follow in the footsteps of former England wing Matt Banahan, and England netball captain Serena Guthrie who will come home with her team soon.

‘People shouldn’t feel the roads are paved with gold here,’ explains Harvey of the Channel Island where fishermen rub shoulders with those-that-lunch then pay with their Coutts bank card.

‘There is a poverty line here, which sounds crazy, but there is like anywhere else.

‘It’s about looking after those kids who would never have that opportunity on a small island, with their health or if they want to be an Olympic champion.

‘I don’t know if there will be a tennis player, a swimmer out there… we’ve got to look after them whatever sport they do. Lionel Messi had to come from some village somewhere!’ 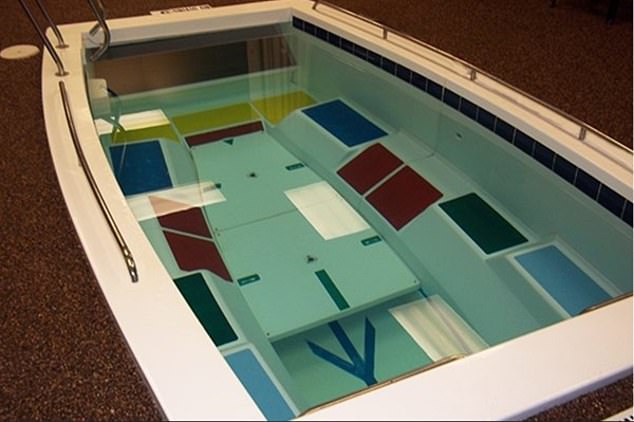 Jersey looks the ideal spot for the Lions. Union flags adorn the place, a strongly independent isle proud to be linked to Britain but also inexorably tied to France — who threatened to turn the electricity off last week in a row over post-Brexit fishing rights. France control 75 per cent of the power here, so it would have caused problems.

When not training the tourists will have the run of the place. A charity dinner is booked for June 15 to raise money for island causes, and residents will be able to watch Gatland’s men in open sessions.

They will have the chance to surf in St Ouen’s, play golf, recover in the sea and visit the beaches of Plemont and St Brelade’s in an area where Covid restrictions are loosening fast with just two current active cases.

‘It’s a bit special when the tide’s up and the sun is out,’ says Harvey Biljon, the coach of the only professional sporting outfit here, Championship rugby side Jersey Reds, whose ground is adjacent to Strive.

‘The cuisine is pretty good, golf not too bad! They can focus on the rugby then break away and see what a beautiful place they’re in.

‘Our groundsman Miles will be working overtime to make sure our pitch is pristine for them!

‘My son is nine years old, and so his minis side can’t wait for them to come. Jersey was on the map already from a rugby perspective, but the Lions will take it to the next level.’ 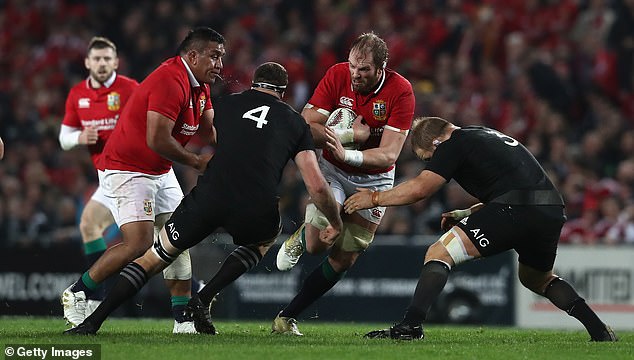 The Reds are used to having giants in the midst having made a habit of beating the relegated Premiership side in the league here, with Bristol and London Irish, twice, chalked off in recent years.

They are something of a trampoline club for future stars too, with Welsh internationals Callum Sheedy, Will Rowlands, Kieran Hardy and England prop Harry Williams spending seasons here recently.

Their 28-year-old backs coach Ed Robinson, son of former England boss Andy, was called up by Eddie Jones to work with the national team in the Six Nations too and recently retired hooker Rob Webber is the next big coaching thing coming through.

On Saturday they will host 1,500 fans for their match against Coventry, but that number will swell significantly when the Lions are in their midst.

‘You won’t believe how much rugby support there is on the island,’ adds Biljon.

So if the Lions win in South Africa this summer, their victory will come with a ‘Made in Jersey’ stamp — not that the islanders will want to take credit.

‘I think it’ll be a counter-attack by Stuart Hogg that wins it, rather than anything I do!’ beams Harvey before rushing off to finish his masterpiece. 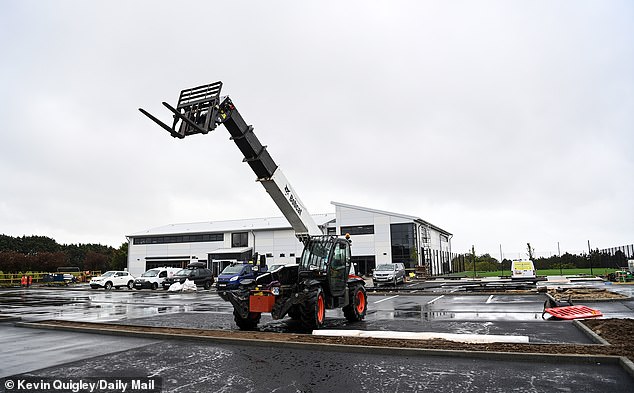