In our first extract from this year’s Wisden, James Anderson pays tribute to his bowling partner on reaching 500 Test scalps.

It seemed written in the stars. Over the past decade and more, our careers have become so intertwined that Stuart’s 500th Test victim just had to be Kraigg Brathwaite, the man I dismissed to reach the same milestone in 2017.

After the first innings of the final Test against West Indies in Manchester last summer, there was chat in our dressing room about whether it really would be Brathwaite. Stuart was on 497, so a lot had to fall into place, but we had a feeling it was going to happen and that grew when he claimed the first two wickets on the third evening — with Brathwaite still there.

When Stuart trapped him leg-before on the final morning, after rain washed out the fourth day, it was amazing to be out in the middle — so much so that Covid-19 protocols went out of the window. I had to give him a hug. We have shared many experiences but none more special than that. 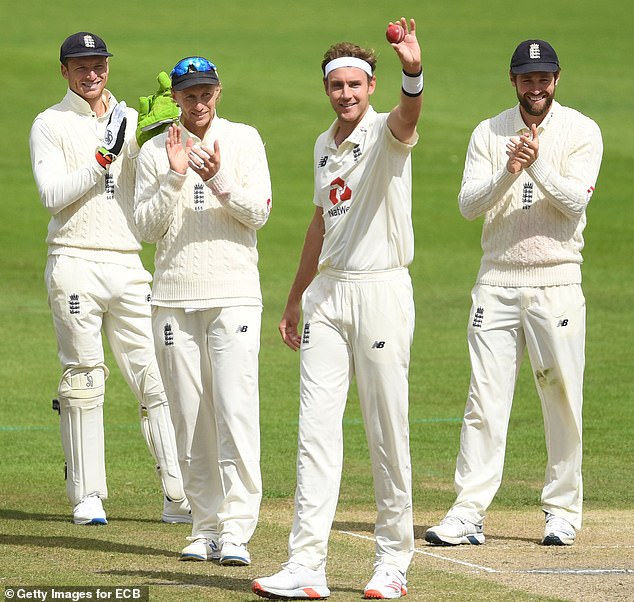 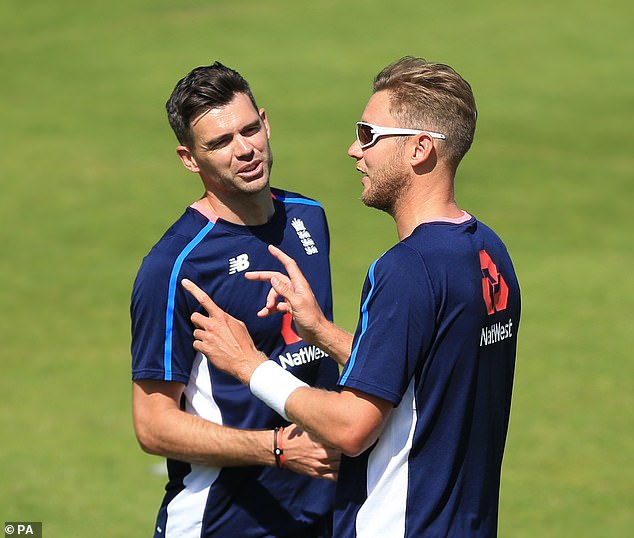 It’s true, I believe, that you don’t really think about your own ‘numbers’, they are simply part of maintaining focus on what you are trying to achieve. But when it’s your mate, you feel proud.

It probably provided me with an insight into how he was feeling when I got my 500th, or when Azhar Ali edged to slip for my 600th at the end of the third Test against Pakistan. What matters more than statistics is being in the dressing room with the guys after amazing wins like the one over the Pakistanis in Manchester.

That’s why we play the game — to create memories. One day, we will look back on everything over a glass or two of red wine.

People will have their own thoughts on Stuart’s best spells, and the eight for 15 in the 2015 Ashes win at Trent Bridge was outstanding. For me, though, that was a scenario loaded in his favour — the first morning of a Test, at his home ground, in bowler-friendly conditions.

Don’t get me wrong, it was an amazing performance. But, in my view, the spells that really stand out occurred when England have needed someone to change the course of the match.

The Oval in 2009 springs to mind. The game felt as if it was drifting away, then Stuart came on. He trapped Shane Watson, bowled Ricky Ponting and had Mike Hussey lbw in one of those streaks for which he has become renowned. He took five for 37 in all and suddenly we had control of the match and the series. 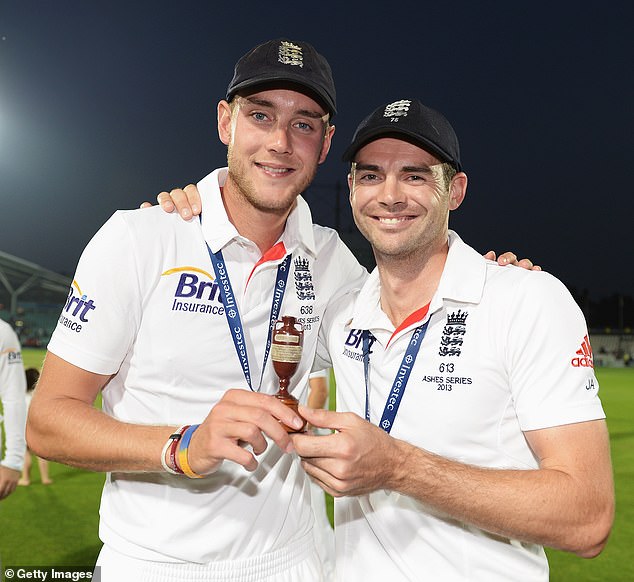 Then there was Durham 2013. Again, the game was not going for us, but he blew Australia’s batting away in the fourth innings. I took the final catch at mid-off to dismiss Peter Siddle and Stuart finished with six-for. It says something about a player when the performances team-mates can recall most readily took place with the game in the balance or the opposition on top.

Another example came earlier in 2013 against New Zealand at Lord’s. They were chasing 239, but Stuart got seven for 44 and we dismissed them for 68. It was one of those days when I knew he was on a roll. He went at four an over but looked a threat every ball and it was my job to dry up the runs at the other end to allow him to keep attacking.

That was a good example of how our partnership works at its best. A lot of people talk about leading an attack, the implication being that it is one bowler who does the job. But I believe we have done it together, trying to get the team into a good position early.

The first time it struck me how we could complement each other was at the start of the 2010-11 Ashes, when we combined really well at Brisbane. We didn’t take a wicket in that spell, but Hussey said it was one of the toughest he had faced. It gave us confidence. 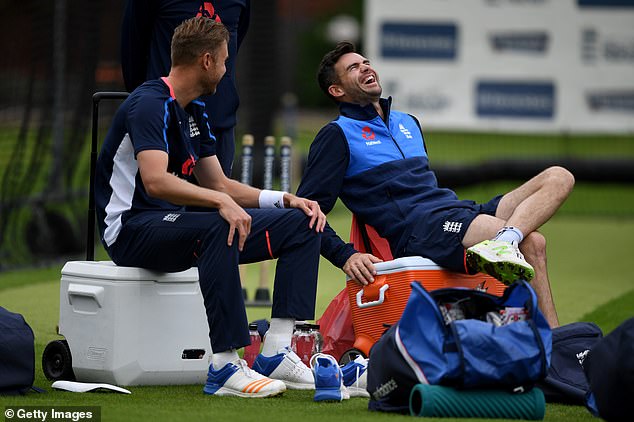 Stuart got injured as we went 1–0 up at Adelaide and missed the rest of the series, but it felt like the start of something. We were working out what we wanted to achieve as a pair.

And it has been as a pair, because I don’t think I would have got anywhere near 600 without him. We work out batsmen and conditions together, sometimes it’s almost like telepathy. Having him at mid-off when I’m bowling, and vice versa, makes a huge difference.

When I first played Test cricket in 2003, bowlers would drift down to fine leg between overs. Nasser Hussain, the captain, was at mid-off and he was the one you would take instructions from. But I feel it makes sense to have the other bowler there, to make sure you are both doing the right thing.

The constant input — throwing ideas around, sharing information — is invaluable. Is the ball swinging? Is it moving off the seam? When should I use the bouncer? 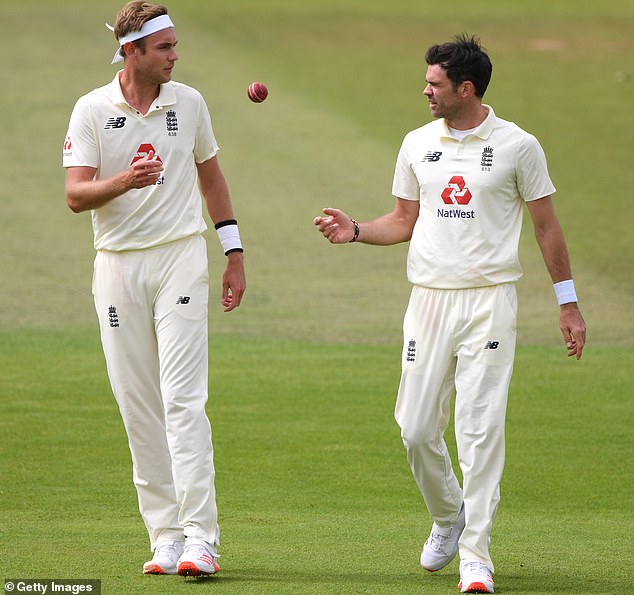 Stuart also senses the slightest doubt in a batsman’s eyes and can pounce. David Warner was struggling against him in the 2019 Ashes and Stuart played it perfectly. Even before play, Warner would ask him, ‘Mate, are you trying to swing the ball, nip it back, or what?’

Stuart just replied: ‘Dunno, mate.’ He relished Warner’s uncertainty — and got him seven times at a cost of 35 runs. When a batsman starts talking like that, you know you have a grip on him.

I’ve referred to Stuart as a streak bowler, and that’s partly to do with his belief that he can get anyone out at any time. But he is a lot more consistent than that: you don’t get 500 Test wickets by going on the odd streak.

Yes, that’s part of what makes him so dangerous. I don’t know if he always feels it, or if it is simply instinctive, but he clearly loves the big occasion. His all-round ability as a bowler should not be undersold, though.

In his early days, there was talk of him being England’s enforcer. But whether it has been roughing batsmen up, as he did then, or outwitting them with the skills he can call on now, he is able to adapt to any surface or situation. 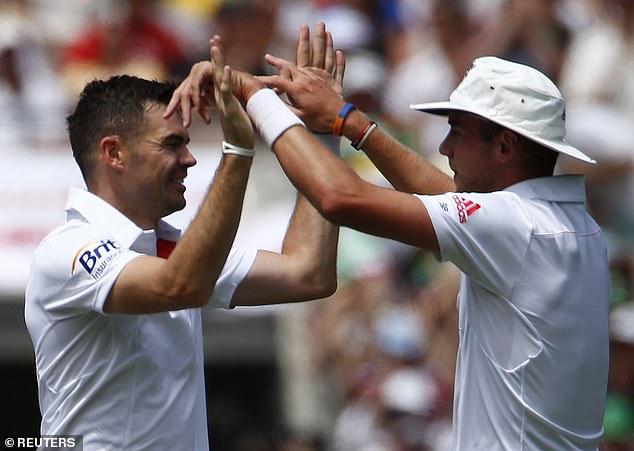 Broad celebrates taking the wicket of David Warner, something that has become a habit

In Test cricket, you cannot sit still. For example, he’s used wobble seam for a while, but there are different types of wobble. Some use scrambled seams, where the ball might land either on the seam or the leather and the bounce becomes unpredictable. Then there is a variation in which the ball goes a fraction off straight. He’s worked hard on both.

In the last couple of years, he’s also put in a lot of work on his action and run-up to get the ball to swing away from the right-hander. It was something he spent hours on in the nets with Peter Moores during lockdown. As a consequence of challenging the outside edge, he has tended to bowl fuller and we saw that pay dividends against West Indies and Pakistan.

He has kept developing and I would argue that only now is he approaching his peak.

He’s 34, so people may think he’s on the other side of the hill, but that need not be the case.

I got better after I turned 34 and there’s no reason he can’t go on to greater things. Like me, he is fortunate in the way he is built and bowling doesn’t seem to take a huge amount out of him. He doesn’t wake up stiff and sore after long spells in the field.

He also has an ability to channel emotions and use them positively. Being left out of the first Test against West Indies last summer hit him hard. He was upset and angry. Had I been in his position, I think I would have felt the same. 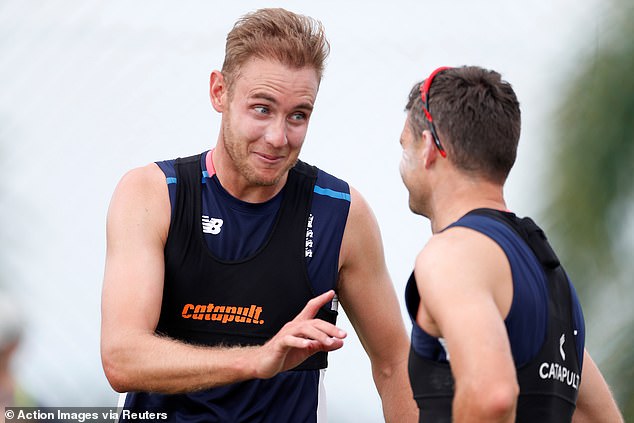 When Broad is written off or has his back against the wall, he produces his best bowling

To be left out after a brilliant couple of years — a successful Ashes and an amazing tour of South Africa where he led the attack superbly — meant he felt let down. But, characteristically, he was determined to show the selectors they had made the wrong decision and the next five Tests brought 29 wickets at 13.

If I had to name the quality I admire most it would be resilience. His bloody-mindedness is extraordinary.

Whenever there has been a question mark next to him over the past 15 years, he has answered it. That’s the Stuart Broad I know and love — never better than when he’s proving the world wrong.