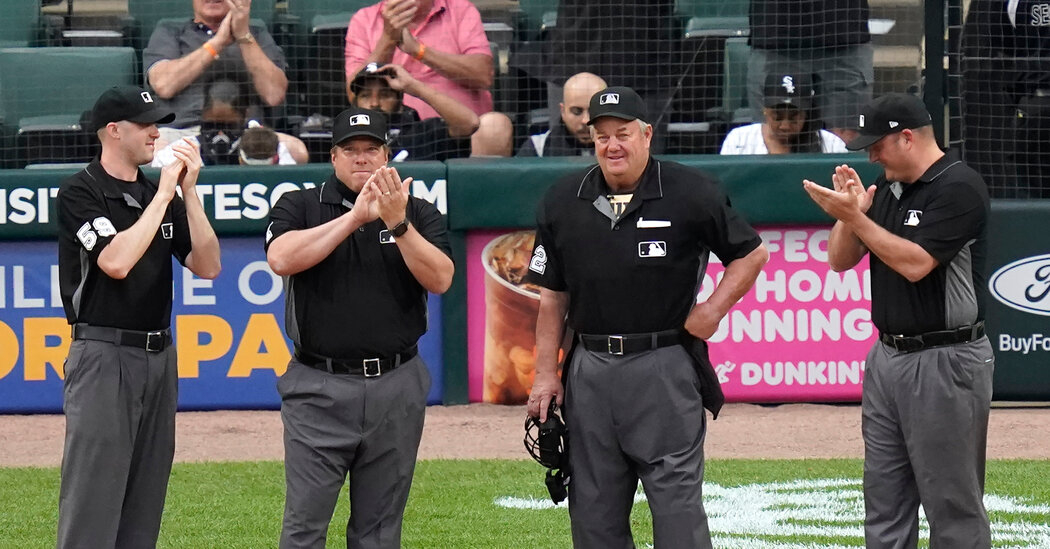 When Joe West took the field for Tuesday night’s game between the St. Louis Cardinals and the Chicago White Sox, it was his 5,376th appearance. Having started his major league career in 1976, he now stands alone as the umpire to have worked the most games in major league history, breaking a record that has stood for 80 years.

West, who has often entertained and frustrated in equal parts, now has a record that suits his larger-than-life personality. And he took it from Bill Klem, a man whose time in the game stretches so far back that he claimed to have invented the hand signals that umpires use to this day. By the time he made the claim there weren’t many people around who could refute him.

Klem was reportedly the first umpire to wear a chest protector under his shirt, and West actually holds a patent on a modern equivalent. And with those two umpires, plus two more, you can span nearly the entire modern era of the game.

In Klem’s first major league game, the Hall of Famer Honus Wagner started for the Pittsburgh Pirates and Miller Huggins, who would go on to manage the Murderers’ Row Yankees, started for the Cincinnati Reds. Klem stayed around the game so long that toward the end of the 1941 season, when he was already in semiretirement, he called a game between the Brooklyn Dodgers and the St. Louis Cardinals in which Pee Wee Reese started for Brooklyn. Known as the Old Arbitrator, he became the mold for modern umpiring and he was elected to the Hall of Fame in 1953.

Barlick was hired to take Klem’s place in a game in 1940, and effectively replaced the Old Arbitrator when Klem went into semiretirement in 1941. The stretch between Barlick’s first game (Sept. 8, 1940) and his last one (Sept. 26, 1971) was so long that M.L.B. was seven seasons away from integration when he started, yet Ernie Banks, the legendary Chicago Cubs infielder, was playing the last game of his 19-season career in Barlick’s finale. Barlick, who missed a total of four seasons because of military service and heart problems, was elected to the Hall of Fame in 1989.

Froemming’s first season came as a member of Barlick’s crew in 1971, and he was still calling games in 2007, breaking Klem’s record for the most full seasons worked. He was a fixture in the game with highs (22 World Series games), lows (a much-debated walk that cost Milt Pappas a perfect game in 1972) and incidents that will live in infamy (Jason Varitek shoving his glove into Alex Rodriguez’s face). Froemming umpired a record 11 no-hitters, and after ending his career on the field he joined M.L.B. as a special assistant.

Known as Country Joe or Cowboy Joe, depending on who you ask, West has found his name on polls of players over the years as both one of baseball’s best and one of its worst. West was part of a group of umpires who resigned in protest as part of a labor dispute in 1999 — he was rehired in 2002 — and as president of the umpires union he negotiated a long contract to keep his peers on the field. A man with interests so varied that he has released country music albums and appeared in a small role in “The Naked Gun,” he once won a defamation suit against a player over the number of times the player had been ejected. He has already announced that 2021 will be his last season.