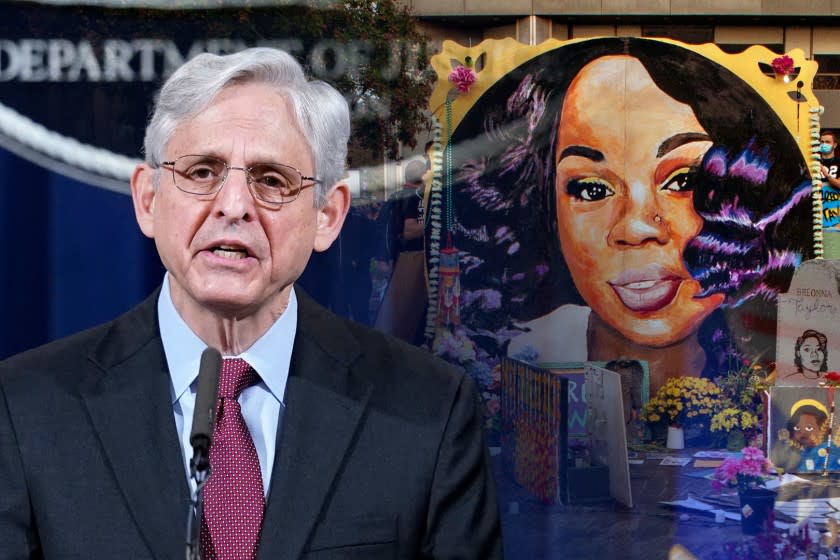 The Justice Department is launching a broad inquiry of the police department in Louisville, Ky., the second such investigation into a local law enforcement agency in the last week and a further sign that the Biden administration is taking an aggressive approach in seeking to enact police reforms.

U.S. Atty. Gen. Merrick Garland announced the probe, saying it will examine whether the Louisville police force engages “in unconstitutional staff searches and seizures, as well as whether the department unlawfully executes search warrants on private homes. It will also assess whether [Louisville Metro Police Department] engages in discriminatory conduct on the basis of race.”

Garland disclosed last week that the Justice Department would be conducting an investigation into the Minneapolis Police Department, a day after a former city police officer there was convicted of murdering George Floyd, a Black man whose death sparked widespread protests of police conduct.

Outside experts, however, have said pattern or practice investigations and consent decrees are critical tools in ensuring deep-rooted problems are addressed.

The Obama administration launched 25 pattern or practice investigations into law enforcement agencies that resulted in 14 consent decrees. But such oversight can be costly and last for years. The Los Angeles Police Department entered such a decree in 2001 and didn’t escape its oversight for more than a decade.

The Louisville Police Department has been under close scrutiny since the shooting death of Breonna Taylor, a Black woman, in March of last year. Taylor’s death did not initially garner as much attention as Floyd’s in May, but as protests grew nationwide over racial injustice, “Say her name. Breonna Taylor!” became part of the rallying cry to ensure women were not left out of the national reckoning over the treatment of people of color by law enforcement.

Taylor, a 26-year-old emergency room technician, was asleep with her boyfriend when police swarmed into her Louisville apartment. Her boyfriend, Kenneth Walker, fired his licensed gun once at the officers, believing the police were intruders. The officers, who had obtained a “no knock” warrant to enter the apartment, fired a fusillade of bullets in return, at least six of which struck Taylor. Police were searching the house as part of a narcotics investigation into Taylor’s ex-boyfriend, Jamarcus Glover. No drugs were found in Taylor’s apartment.

Three Louisville police officers were fired as a result of the shooting, one of whom was indicted on state charges of endangering Taylor’s neighbors for firing recklessly in the apartment. No police officers have been charged in Taylor’s death.

The Justice Department was already conducting an investigation to see whether any civil rights laws were violated during the encounter.

The inquiry announced Monday by Garland is a separate civil probe of the entire Louisville force. The Justice Department will seek to determine if officers routinely engage in behavior that violates the Constitution. The probe is expected to explore such matters as recruitment, training, policy and technology. Garland, who did not take questions from reporters during his video announcement, said the Justice Department briefed Louisville’s leaders on the investigation.

“It is clear that the public officials in Minneapolis and Louisville, including those in law enforcement, recognize the importance and urgency of our efforts,” Garland said.

A senior Justice Department official said department attorneys had examined a broad range of publicly available information about the city’s force before deciding to initiate the inquiry. “No single incident will ever trigger the opening of a pattern or practice investigation,” the official said, referring to Taylor’s death.