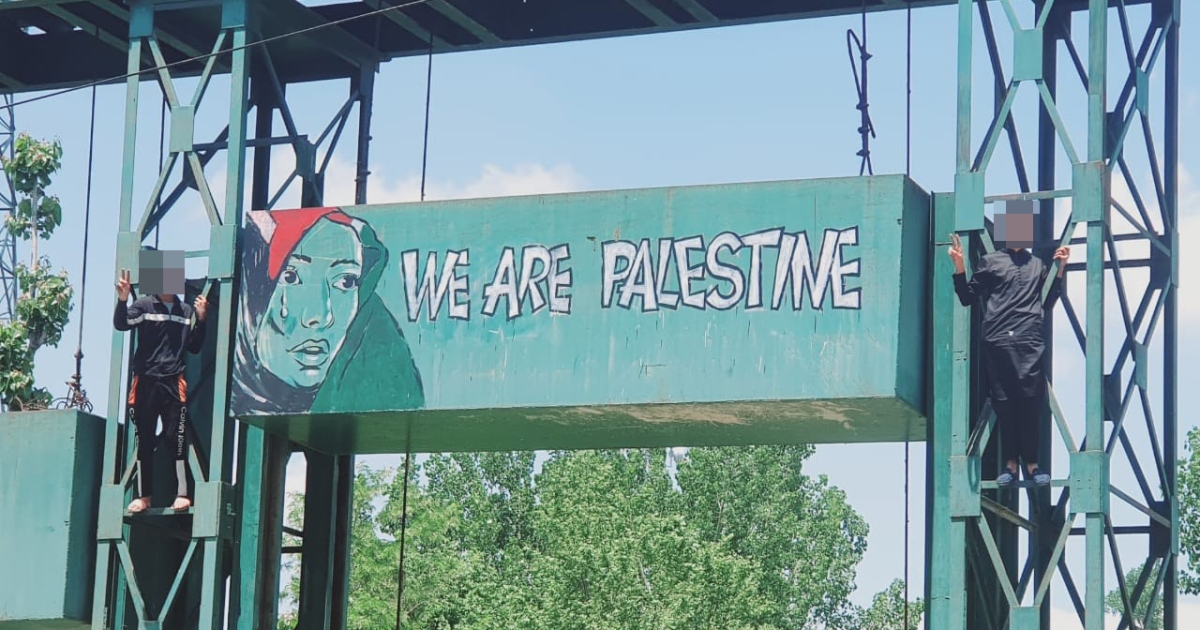 The family of 32-year-old Mudasir Gull, an artist based in the main city of Srinagar, accused the regional authority of censoring freedom of expression of an artist.

“Why is he detained? What has he done? Has the government banned art here?” his sister Muzamil Firdous asked.

“When the whole world is waking up against Israel’s atrocities, we can’t speak, we can’t practice art; what kind of democracy we live in? Can’t we express our grief for Palestine?” Firdous told Al Jazeera.

Kashmiris came out on the streets after the congregational Friday prayers in support of Palestine, waving their flags in a show of solidarity against deadly Israeli air attacks on the Gaza Strip and a brutal crackdown on Palestinians in occupied East Jerusalem and Israel.

At least 174 Palestinians have been killed, including more than 40 children, triggering solidarity protests across the world.

Can’t we express our grief for Palestine?

But security forces in Kashmir, one of the most militarised zones in the world, moved quickly to clamp down the protests in the region where anti-India sentiment remains high. In August 2019, India’s Hindu nationalist government removed the region’s limited autonomy and imposed a security lockdown to ward off protests.

Gull’s family said that he was approached by a group of young people on Friday to paint the graffiti. “They told my brother, it is a protest of solidarity. They convinced him that it is not against India or there will not be any such slogan raised,” Firdous said.

The 32-year-old artist was arrested and made to deface the graffiti that showed a woman sobbing with her head wrapped in the Palestinian flag. The graffiti that read “we are Palestine” was widely shared on social media.

“He is an artist. We are shocked at his detention for doing his job. We don’t want the government to ruin his life, painting is his livelihood,” Firdous told Al Jazeera.

The family said that Gull is suffering from health issues and cannot remain in detention for long amid an outbreak of COVID-19.

Among the 20 arrested is a religious leader, Sarjan Barkati, from southern Kashmir’s Shopian district. He was arrested after he raised slogans and prayed for the Palestinian people in a mosque, his family said.

Barkati was arrested in 2016 when he led protests against the killing of a popular rebel commander, Burhan Wani, by Indian forces. Thousands of people have been killed in decades of armed rebellion against Indian rule.

My friend, the brilliant Kashmir artist Mudasir Gul has been charged under PSA (Public Safety Act) by Indian govt for drawing art work in support of Palestine.#freemudasirgul#freedomofspeech#indiahttps://t.co/mkx9YhkUy7 pic.twitter.com/jlqiSN2R2D

The region has witnessed protests and support through art and writing for the Palestinian cause over the years. In parts of Srinagar’s old city, graffiti depicting support for Palestine can still be seen on shop shutters, roads and walls.

Since the abrogation of Kashmir’s autonomy in 2019, the region has been under tremendous state pressure to prevent any public protests. Even as Kashmir has been unusually calm over the last year and a half, the simmering tensions have resulted in a few protests in recent months.

“We know there is a lot of pent-up anger in people. Our past observations suggest that it needs a trigger to come out and that trigger could be anything,” a police official told Al Jazeera on the condition of anonymity.

“Even these solidarity protests could trigger bigger pro-separatist protests. That’s why we don’t want to take a chance this time around,” he said, referring to pro-freedom leaders as separatists.

Kashmir rebel groups and pro-freedom leaders want independence from India or its merger with Pakistan. India has accused Pakistan of arming the rebels – a charge Islamabad has denied.

‘O the oppressed of Palestine’

Shabroza Jan, 30, the arrested Shopian religious leader’s wife, told al Jazeera that her husband has been arrested for a solidarity prayer.

“He did not do anything wrong. He just prayed for them (Palestine). On Saturday morning, police took him away from his home. We tried to meet him but we were not allowed,” she said.

In the video, shot inside a mosque in Shopian, Barkati can be seen praying for Palestine and raising slogans like “O the oppressed of Palestine, we are with you”.

Police officials told al Jazeera that they will not allow any such protests in the region.

Even these solidarity protests could trigger bigger pro-separatist protests.

“We will not allow such protests and not give an excuse to miscreants and pro-Azadi (pro-freedom) elements to galvanise people on this point to go for street protests,” another senior police official told Al Jazeera on condition of anonymity.

Earlier, the police in a statement warned against any street protests and said that police were keeping a very close watch on elements “who are attempting to leverage the unfortunate situation in Palestine to disturb public peace and order in the Kashmir Valley”.

The police in a statement said that “it would not allow cynical encashments of public anger to trigger violence, lawlessness and disorder on Kashmir streets.”

Sheikh Showkat Hussain, a political analyst based in the region, said that “Kashmiris have always been supportive of Palestine ever since the issue erupted.

“Though they (Kashmiris) have themselves been involved in a similar type of situation. But the fact that they too understand the pangs of subjugation made them more sensitive towards the Palestine issue as compared with other parts of the sub-continent,” Hussain said.

Hussain said that India was more vocal about the Palestinian issue following its independence in 1947 from British rule.

“It was only towards the later years of [Prime Minister] Indira Gandhi that they started to get closer to Israel, and now the ruling government is hand in glove with Israel,” he said, adding that the government in Kashmir fears that there can be a similar kind of uprising here.