Exeter’s ginger ninja Sam Simmonds continued his try-scoring hot-streak by taking a hat-trick to break the league’s all-time try-scoring record as the Chiefs made the playoffs for the sixth year in a row.

The newly-selected Lion scored his 17th, 18th and 19th tries of an extraordinary season in a bonus-point win for Exeter.

Chiefs qualified for the end-of-year semi-finals alongside Bristol Bears with three regular-season games left as Irish were well beaten in front of 3,988 fans in Brentford. 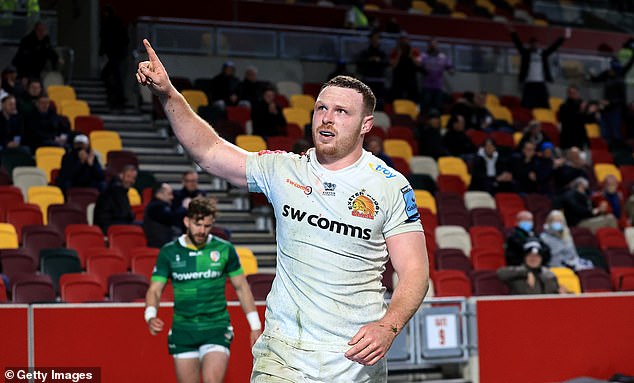 Simmonds was three years old when the record was set in 1998 by Richmond’s Dominic Chapman, later equalled by Wasps winger Christian Wade in 2017, but now the Lion is prowling out on his own in the record books.

He said: ‘I turned up at Exeter at 18 not really knowing what position I wanted to play. They’ve allowed me to be me, score tries and excel.

‘The record means a lot to me. As a team we’re striving for greatness and to win the competition. The boys want me to score and get the record. Credit to them for helping me. The Lions was not something I ever dreamed of. I’m going to look forward to the summer.’

The No 8 now has an incredible 50 league tries in 66 matches. His brother Joe also sauntered in for his own first-half try, easing past prop Lovejoy Chawatama, the only one he failed to convert. 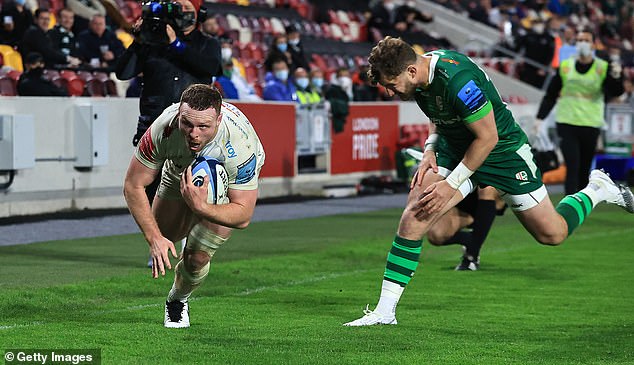 Sam’s first two came when bashing over from close range with supporting drivers on either side – as he continued to make a mockery of his non-selection by Eddie Jones for England, who was here.

However Loader let Tom O’Flaherty score, letting the ball bobble over his try-line, before the Exeter wing was sin-binned for taking full-back Tom Parton out in the air.

But it did not matter as Alex Cuthbert put Simmonds into the right-hand corner, sliding in for his superb hat-trick eight minutes from time, before O’Flaherty had a late sixth try denied for a knock-on.