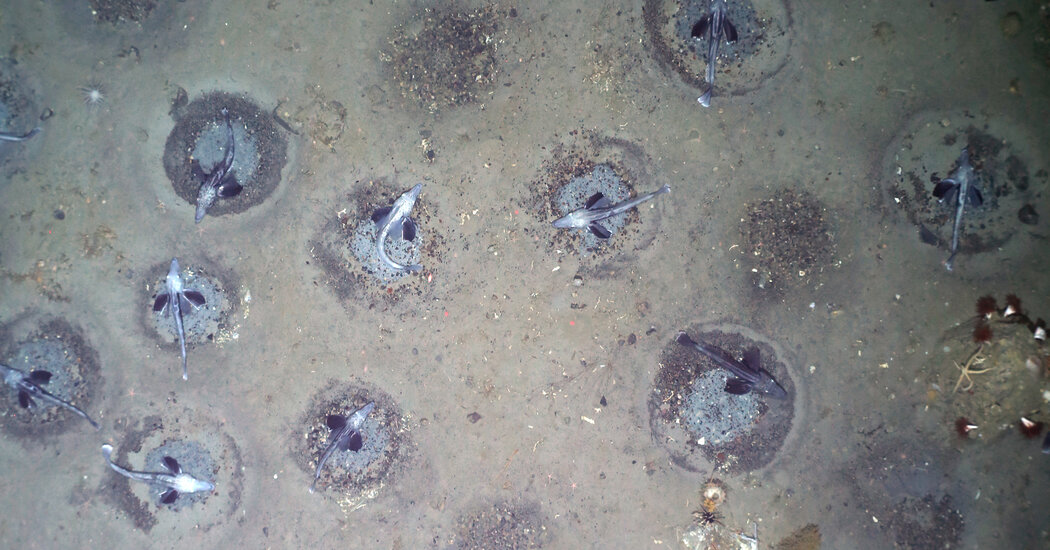 As soon as the remotely operated camera glimpsed the bottom of the Weddell Sea, more than a thousand feet below the icy ceiling at the surface, Lilian Boehringer, a student researcher at the Alfred Wegener Institute in Germany, saw the icefish nests. The sandy craters dimpled the seafloor, each the size of a hula hoop and less than a foot apart. Each crater held a single, stolid icefish, dark pectoral fins outspread like bat wings over a clutch of eggs.

Aptly named icefishes thrive in waters just above freezing with enormous hearts and blood that runs clear as vodka. Their blood is transparent because they lack red blood cells and hemoglobin to transport oxygen throughout the body. Icefishes’ loss of hemoglobin genes was less an evolutionary adaptation than a happy accident, one that has allowed them to absorb the oxygen-rich Antarctic waters through their skin.

The sighting occurred in February 2021 in the camera room aboard a research ship, the Polarstern, which had come to the Weddell Sea to study other things, not icefish. It was 3 a.m. near Antarctica, meaning the sun was out but most of the ship was asleep. To Ms. Boehringer’s surprise, the camera kept transmitting pictures as it moved with the ship, revealing an uninterrupted horizon of icefish nests every 20 seconds.

“It just didn’t stop,” Ms. Boehringer said. “They were everywhere.”

Half an hour later, Autun Purser, a deep-sea biologist at the same institute, joined Ms. Boehringer. On the camera feed there remained nothing but nests.

“We were like, is this ever going to end?” Dr. Purser said. “How come no one has ever seen this before?”

The nests persisted for the entire four-hour dive, with a total of 16,160 recorded on camera. After two more dives by the camera, the scientists estimated the colony of Neopagetopsis ionah icefish stretched across 92 square miles of the serene Antarctic sea, totaling 60 million active nests. The researchers described the site — the largest fish breeding colony ever discovered — in a paper published Thursday in the journal Current Biology.

“Holy cow,” said C.-H. Christina Cheng, an evolutionary biologist at the University of Illinois-Urbana-Champaign, who was not involved with the research. “This is really unprecedented,” she said. “It is crazy dense. It is a major discovery.”

The paper provides “evidence of a complex and so far undescribed benthic ecosystem in the Weddell Sea,” said Mario La Mesa, a biologist at the Institute of Polar Sciences in Bologna, Italy, who was not involved with the research. “I would not be surprised to find other massive colonies of breeding fishes elsewhere,” said Dr. La Mesa, who last year described the same Antarctic icefish species’ nest-guarding behavior from sites near the newly discovered colony.

Each of the newly discovered nests held, on average, 1,735 large, yolky eggs — low fecundity for a fish. An unprotected clutch would prove an easy snack for predators like starfish, polychaete worms and sea spiders, Dr. Cheng said. So the males stand sentry to ensure their offspring are not devoured, at least not before they have the chance to hatch, and may clean the nests with their elongated lower jaw, according to Manuel Novillo, a researcher at the Bernardino Rivadavia Museum of Natural Science in Argentina, who was not involved with the research.

About three-quarters of the colony’s nests were guarded by a single fish. The others had eggs but no fish, a fish carcass furred white with bacteria or nothing at all. Near the edges of the colony, many unused or abandoned nests cradled several icefish carcasses, many with starfishes and octopuses feasting on their eyes and soft parts.

“If you die in the fish nest area, you rot there,” Dr. Purser said. “But if you die at the edges, then it seems to be everyone grabs you and starts eating you there.”

The researchers observed that the colony occupied an unusually warm patch of deep water, with temperatures up to about 35 degrees Fahrenheit — practically toasty compared to other Antarctic waters.

Although the discovery of the nests contributes to scientists’ understanding of the icefish life cycle, it raises even more questions. How often are the nests built, and are they reused? Do the fish die after the eggs hatch? Or, perhaps the most obvious: “Why there?” Dr. Cheng asked.

The authors have no sure answers, only speculations. Maybe the warm deep currents guide the fish to the grounds. Maybe there is a bounty of zooplankton for the fry to devour. Or maybe it’s something else.

But there must be something special about the location of the active colony. Around 31 miles west, the researchers found a patch of seafloor similarly littered with nests: all empty. These nests were abandoned, overtaken by sponges and corals — long-living creatures that take years to grow, Dr. Purser said.

Waters above the icefishes’ expansive settlement also host hungry, foraging Weddell seals. When the researchers collected satellite tracking data from seals during the expedition and analyzed it with historical data, they found, unsurprisingly, that the seals dive primarily to the icefish nests. “They’re having a nice dinner,” Dr. Purser said.

Before the end of the cruise, the researchers deployed a camera that will photograph the site twice daily for two years, hopefully revealing even more about the life cycle of the icefish. Dr. Novillo said he is looking forward to seeing what the camera captures. “It might constitute the first field observation of courtship behavior and/or nest preparation,” he wrote in an email.

New insights into how icefish reproduce and contribute to polar food webs could help manage and conserve populations. The authors argue the new paper provides enough evidence to protect the Weddell Sea under the Convention on the Conservation of Antarctic Marine Living Resources.

“The seafloor is not just barren and boring,” Dr. Purser said. “Such huge discoveries are still there to be made, even today in the 21st century.”