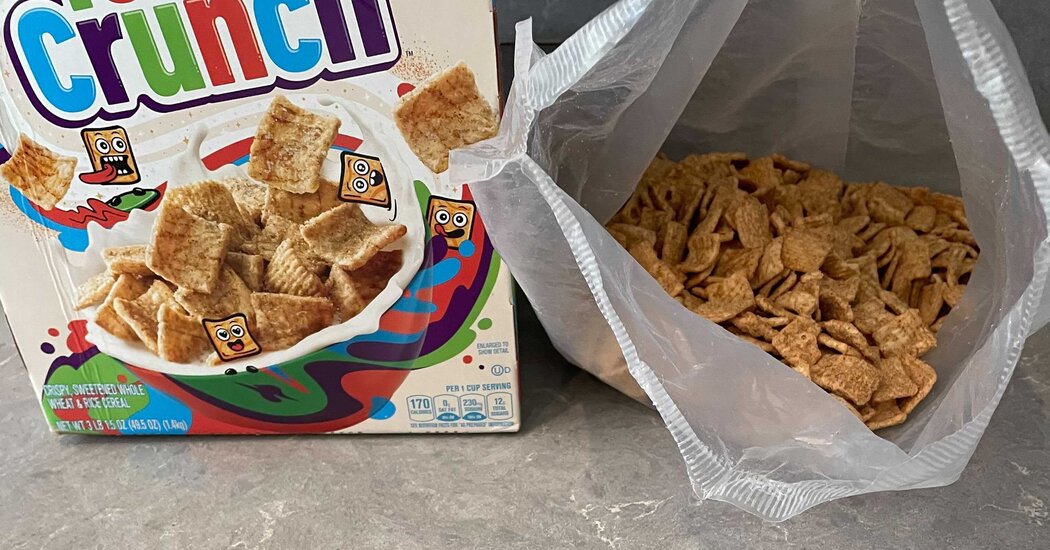 Cereal is a staple of the American breakfast table, consumed by millions of people every day and tied, for many, with memories of childhood. So when a story began circulating this week about a disturbing discovery in a box of Cinnamon Toast Crunch, consumers were horrified.

None more so than Jensen Karp.

On Monday morning, he ate a bowl of his favorite cinnamon sugar-striped cereal. As he began filling a second bowl, “something plopped out of the box,” he said in an interview. “I picked it up, and I was like, ‘This is clearly a shrimp tail.’”

He looked in the bag and saw what appeared to be another tail. Both were encrusted with sugar. “I get really grossed out, and I’m medicated for O.C.D., so this is a total nightmare for me,” he said.

Mr. Karp, a 41-year-old comedian and writer in Los Angeles, took a picture of the contents and sent it to his wife, Danielle Fishel Karp, who played Topanga Lawrence-Matthews on “Boy Meets World.”

“Privately, they were still being very nice,” he said, offering to send a replacement box, which he politely declined. Then the brand issued a public statement on Twitter.

“After further investigation with our team that closely examined the image, it appears to be an accumulation of the cinnamon sugar that sometimes can occur when ingredients aren’t thoroughly blended,” the statement from Cinnamon Toast Crunch read. “We assure you that there’s no possibility of cross contamination with shrimp.”

That didn’t sit well with Mr. Karp, and he responded with frustration.

When his tweet started getting attention, a friend called and suggested that he re-examine the bag of cereal. “I had never even thought about going back into the bag,” he said. “Never even crossed my mind.”

After looking again, he now wishes he hadn’t. In addition to a few objects that Mr. Karp described as “shrimp skins-looking things,” “a small string” and something that looked like a pistachio — all encrusted in sugar — he noticed a “small black piece” on some of the squares and at bottom of the bag.

These, he feared, could be rat feces. “That’s what I’m trying to get tested right now, because that’s the only thing that really matters to me as far as if I can get sick,” he said. On Monday night, he called the California Poison Control System, which suggested that he take a sample to a lab.

So he drove to Quest Diagnostics, which was not able to test the sample but suggested a different lab. He reached out and is waiting to hear back. So far, he said, he has “zero” symptoms. “I am most likely not sick,” he wrote in a text message. “But I am not against checking what I ate.”

He had bought a “two pack” of Cinnamon Toast Crunch, a large box containing two bags. On the other bag of cereal, he noticed what appeared to be clear tape along the bottom, leading him to believe the boxes might have been tampered with.

“While we are still investigating this matter, we can say with confidence that this did not occur at our facility,” Mike Siemienas, a representative for General Mills, wrote in an email. “We are waiting for the consumer to send us the package to investigate further. Any consumers who notice their cereal box or bag has been tampered with, such as the clear tape that was found in this case, should contact us.”

Mr. Karp said he is leery of sending the contents to General Mills. “I’m definitely holding on to one of them,” he said. (In a subsequent email, a General Mills representative advised Mr. Karp to send the items to his “local law enforcement” if he would not send them to the company.)

A friend connected him with a third testing company, which he is hoping to have test one of the tails to confirm that it is, in fact, shrimp. For now, he said, “I’m not considering legal action. Obviously, if I ate rat poop, we’re gonna have to readdress that.”

Mr. Karp is frustrated with how General Mills handled the situation. “All you have to do is say, ‘This is such a bummer, we’re going to look into it. We’re going to recall the ones from your Costco.’ Like, it’s such an easy PR thing to do,” he said. “But instead, they wanted to basically gaslight me.”

This is not General Mills’ first shrimp rodeo. In 2011, the company sued a Michigan blueberry packer after a shipment — which was intended for future use in blueberry scones — was found to be contaminated with pieces of shrimp.

“Upon further inspection of the remaining cases of Lot #210082 Adkin blueberries, GMI discovered one shrimp and a shrimp tail on the outside of the cases,” the suit read. “The tainted blueberries were unsuitable for use in any GMI product, much less the intended product.”

Mr. Karp is aware that Twitter has often been used by comedians to stage viral hoaxes. But he swears his shrimp saga is no tall tale.

Furthermore, staging the scenario would require craft skills he does not possess, he said. “There’s clearly things that wouldn’t be a prank,” he said. “I couldn’t do those things.”

“I just want you to fix it, you know, for other people,” he said, citing the possibility that shrimp could contaminate the cereal of people with shellfish allergies, or who keep kosher. “I’m not even like trying to say like, ‘Be better,’ or whatever. I’m literally just saying, ‘Go investigate it.’”