Something will have to give in the Australian Open final on Sunday, when the man who has forgotten how to lose plays the man who never gets beaten in Melbourne.

Daniil Medvedev’s 20-match unbeaten streak, which stretches back to late October, will be given the ultimate test when he tackles Novak Djokovic.

In order to maintain it, he will have to snap the Serb’s record of having won each of his previous eight finals at Melbourne Park. 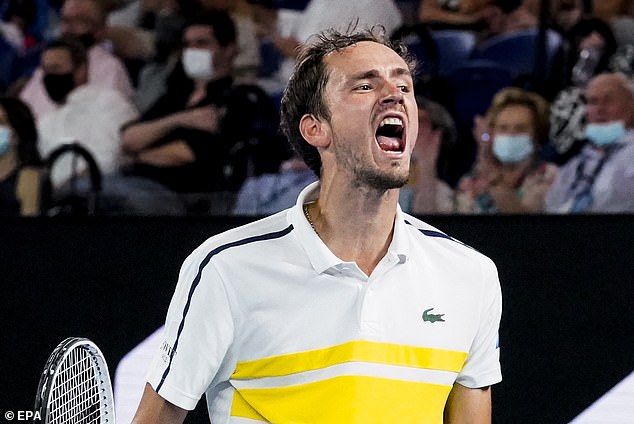 ‘It’s him who has all the pressure, reaching Roger and Rafa in the Grand Slams,’ reasoned the 25-year-old world No 4. ‘He has more experience, but more to lose.’

Beyond mind games, Medvedev has grounds for believing in his chances and, unusually, the bookmakers make the defending champion only the marginal favourite. The Russian made easy work of his semi-final, beating Stefanos Tsitsipas 6-4, 6-2, 7-5 with his opponent clearly feeling the effects of his five-set win over Rafael Nadal.

It meant that since his winning streak began last year, Medvedev has now beaten every other member of the top 10, apart from the absent Roger Federer. 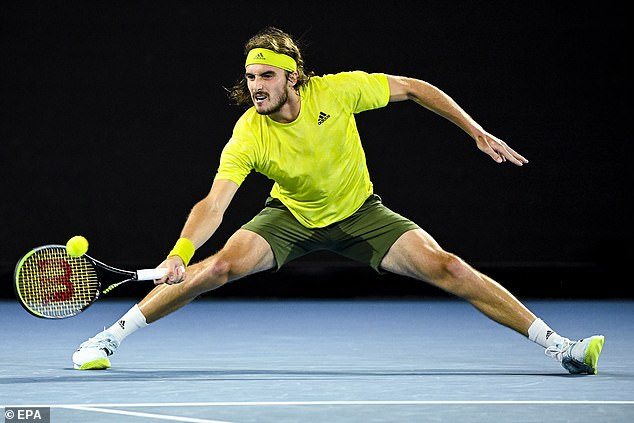 That includes Djokovic, who he overcame in straight sets during the group stages of London’s ATP Finals in November.

His trampling over the best players in the world illustrates how difficult it is to cope with his powerful and awesomely consistent baseline game, based on outstanding movement for a man of 6ft 6in.

Medvedev, not lacking self-belief, regrets that Federer has not been around to make up the full set. ‘It’s a pity that Roger is not playing. I would love to have played him,’ he said. ‘I beat Novak in London, maybe he was not at his best, but it’s somewhere he won five times, and quite similar to here maybe.’

Djokovic stated he is not ready to give up his title to the younger challengers. Medvedev replied in deadpan fashion: ‘When Novak says he’s not going to hand anything to anybody, I believe him.’ 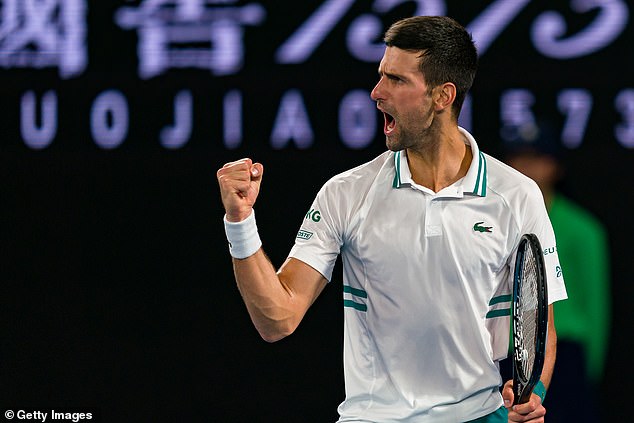 Medvedev, who had to dig deep to take last set, will now face Novak Djokovic in Sunday’s final

Meanwhile, Jennifer Brady this morning faces Naomi Osaka as she tries to become the latest unlikely Grand Slam champion in the women’s game.

Although her ranking is a modest 24, it is a short trawl through the record books to find the most recent champion from outside the top 20.

It was only last October when Polish teenager Iga Swiatek came from nowhere to win at Roland Garros as the world No 48.

Another gradual developer, Brady, 25, made the US Open semi-finals last year.

Now she must tackle Osaka, whose beautifully-timed groundstrokes proved comfortably too much for Serena Williams on Thursday.