Times may be uncertain, but Rafael Nadal‘s extraordinary ability on clay continues as one of life’s reassuring constants just short of his 35th birthday.

He remains on course for his annual victory at Roland Garros after claiming a 10th Italian Open title; La Decima with a strangely undulating 7-5, 1-6, 6-3 win over arch-rival Novak Djokovic in Rome.

The world No 1 will, however, find encouragement in the way he caused Nadal difficulties before tiring at the end, after playing two matches on Saturday. It is not a foregone conclusion that Nadal will overtake Roger Federer by moving to 21 Grand Slam titles in Paris. 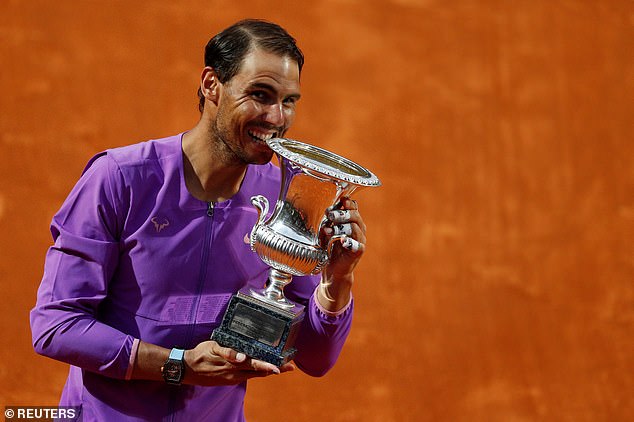 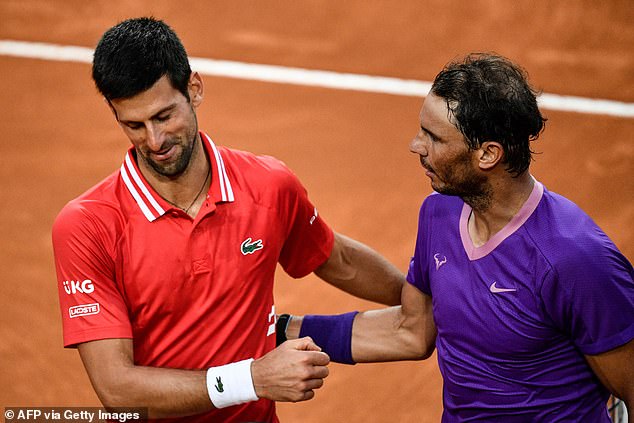 But with two weeks to go, the Spaniard finds himself exactly where he wants to be. ‘I was lucky at some moments, I have been better and better, finding my rhythm. Ten titles here is impossible to imagine,’ said Nadal, who has amassed a 14-2 record on the dirt this spring.

It was, astonishingly, this pair’s 57th meeting and nothing like the severe beating that the champion handed out to the Serb in October, in the rescheduled Paris final.

This time Djokovic attacked hard from the start and his penetrating return of serve always proved a handful for his opponent. Nadal was also troubled by the state of the court and reacted angrily in the first set when he tripped over one of the lines after hitting a running, cross-court pass.

He fell away in surprising fashion during the second set, but the decisive moment in the third came when Nadal sent a backhand down the line to break for 4-2. 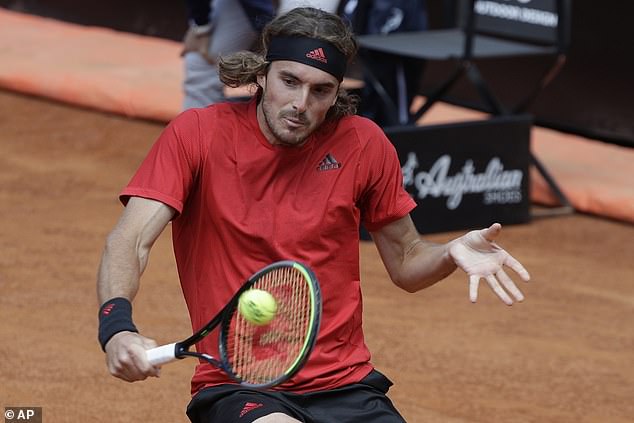 Rome is not quite the signpost for Paris it usually is, as Roland Garros has moved back a week and Djokovic plans to play the tournament his family owns in Belgrade beforehand.

With Dominic Thiem relatively out of sorts, the Serb still looks the biggest danger to Nadal, although Stefanos Tsitsipas should not be entirely discounted.

The reigning Paris champion Iga Swiatek has established herself as probable women’s joint-favourite for Paris, alongside Ash Barty. In the Rome women’s final, the 19-year-old Pole took only 45 minutes to humiliate Karolina Pliskova 6-0, 6-0 and lost only 13 points in the process; showcasing again the almost complete absence of weaknesses in her game on this surface.

Britain’s Joe Salisbury and partner Rajeev Ram were beaten 6-4, 7-6 in the final of the men’s doubles by Nikola Mektic and Mate Pavic of Croatia.