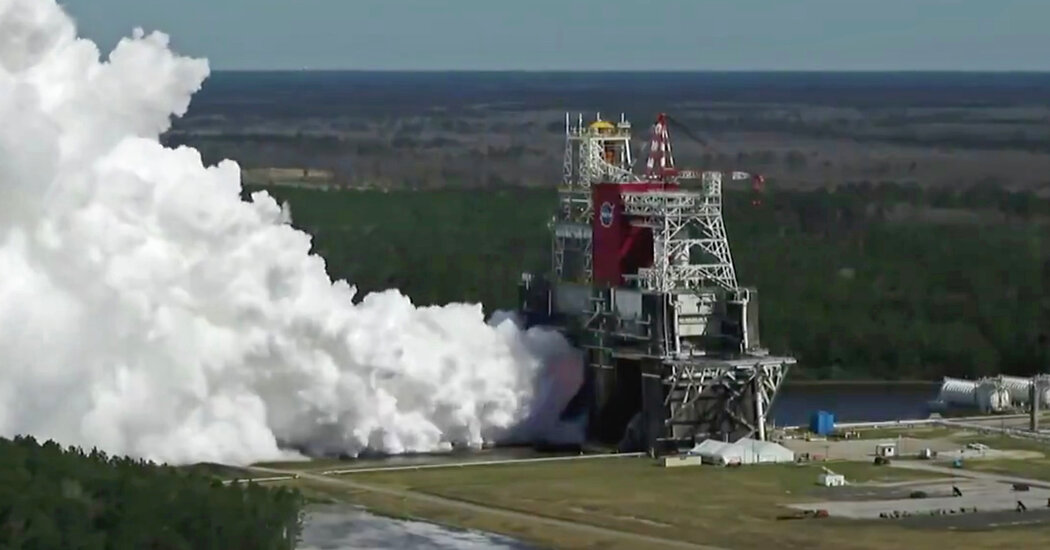 At one point, cameras beneath the test stand showed flames at the base of one engine where cork insulation caught fire. But officials said temperature sensors on the engine below the layers of cork did not measure excessive heat, and the problem would not occur during an actual launch when the upper atmosphere would be too thin for fire to burn.

“We were in great shape,” said John Shannon, vice president and program manager for the Space Launch System at Boeing, which built the core stage. “The cork did its job.”

NASA tried to complete this test in January. But when a piece of equipment did not operate quite as expected, the rocket’s computer shut down the engines after only about one minute. Seeking more data on the performance of the stage and the engines, engineers fixed the issues and tried again.

Engineers will now review the results.

“From our initial look at all the data we achieved all of the objectives, even our secondary objectives,” Mr. Shannon said. “We’ll be working through that over the next couple of weeks as we do very detailed inspections of the hardware. But the initial look is that everything worked perfectly.”

After some refurbishment, the core stage will be packed up and shipped by barge to Kennedy Space Center, perhaps before the end of April, according to Julie Bassler, a manager for the rocket. There, it and other pieces of the rocket including two strap-on rocket boosters, a second stage and the Orion crew capsule will be put together.

That launch will be the Artemis 1 mission. (In Greek mythology, Artemis is the sister of Apollo, and NASA officials have repeatedly said one of the next astronauts to step on the moon will be a woman.)

For that flight, there will be no astronauts aboard. The launch will carry the Orion module, as well as a variety of small CubeSats, on a course to the moon. The capsule will orbit the moon several times, much as in NASA’s Apollo 8 mission, before returning to Earth and splashing down in a water landing.