Kyle Jamieson has taken most things in his monstrous stride since announcing himself on the global stage so spectacularly last year – although that cannot be said of an Indian Premier League contract commensurate with his physical stature.

Reflecting in his Southampton hotel room on a £1.5million deal with Royal Challengers Bangalore for the Covid-curtailed 2021 IPL season, the giant New Zealand seamer admits the overnight switch from wannabe to got-the-lot proved challenging.

Jamieson said: ‘That price tag brings with it expectations. At first, I didn’t think much of it but as people will have seen in the Australia series immediately after the auction, things didn’t unfold (as I would have wanted) and that was down to the magnitude of the situation. I wasn’t handling things as well as I could have. 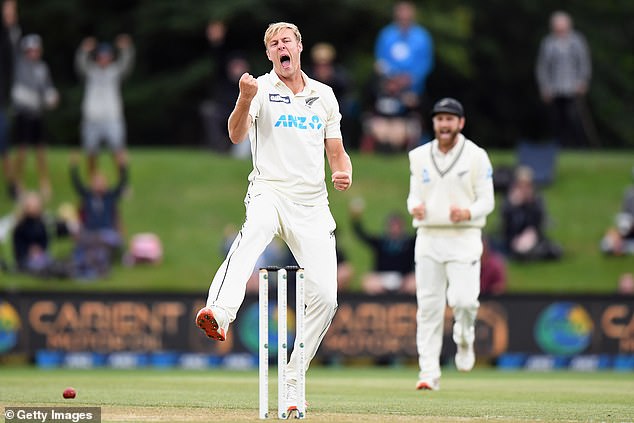 ‘There is no textbook or manual to deal with that sort of thing. It certainly took me a while to process it all.’

A voracious reader, Jamieson, 26, has spent the quarantine period for the tour of England – which for him began with 10 days in a soggy Maldives before moving on to the Ageas Bowl – submerged in The Courage to be Disliked, in which the theories of 19th century psychologist Alfred Adler show how to become your best self.

But after returning combined figures of 15-0-175-1 in four Twenty20s against the Australians, he turned once more to Pete Sanford, New Zealand’s mental skills coach. 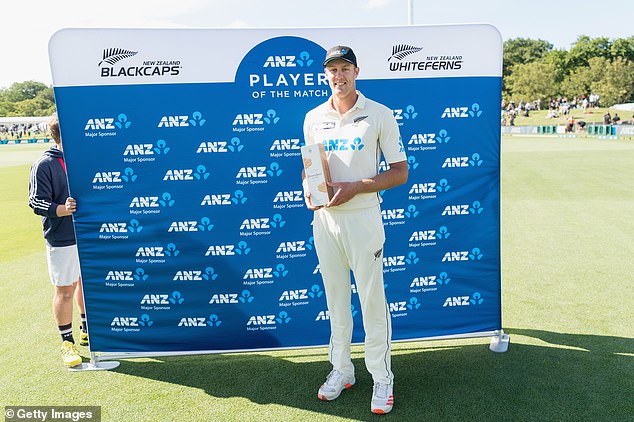 Earlier in his career, Sanford helped Jamieson address on-field behaviour of which he was not proud. ‘I spoke to him about the weight I put on myself. I’d only been in international cricket for 12 months and that was the crux of it. A week in isolation in India allowed me to reflect on how I was going to move forward.’

Until that point, Jamieson had a touch of Midas about him.

Six appearances in whites for the Black Caps, regularly featuring batsmen being terrorised by throat balls from just shy of a length, resulted in six wins and 36 wickets at only 13 runs apiece. 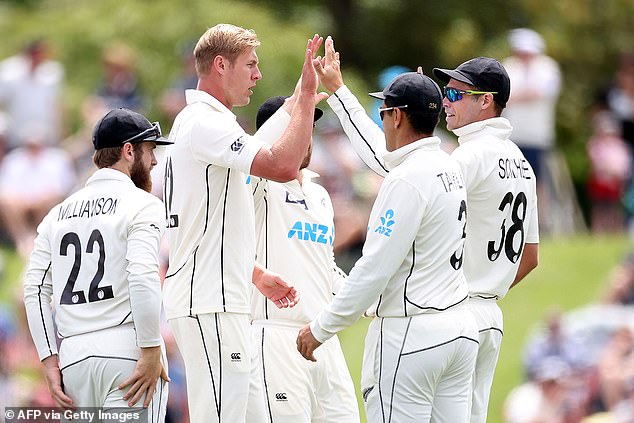 In an attempt to deal with the price tag, Jamieson (second left) again turned to Pete Sanford

His form was integral to New Zealand qualifying for the inaugural World Test Championship final next month, after a two-match series against England.

‘I don’t know if you can ever be sure how you are going to go on the international stage until you’ve played. It’s a great unknown when you’ve played domestic cricket and move up,’ he said.

‘I don’t look at success as numbers. I look at it as contributing to the team. Whether that means four or five wickets, or none but building pressure at the other end, either is fine by me.’ 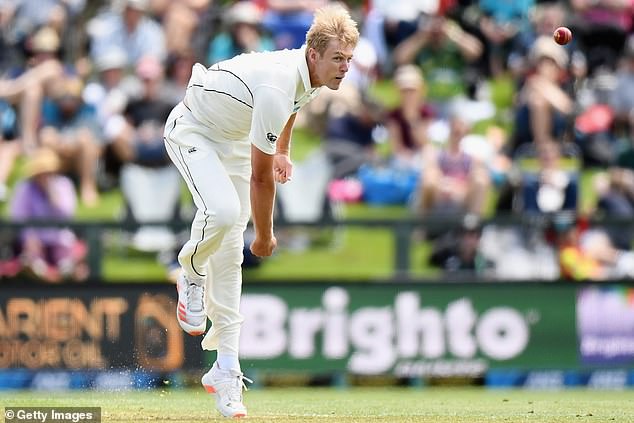 The Kiwi attack will be missing their super-over bowler Trent Boult for family reasons as New Zealand return to Lord’s for the first time since their 2019 World Cup final by England.

So Jamieson could mark his first overseas international by sharing the new ball with Tim Southee.

Jamieson assesses his bowling strengths by saying: ‘My height is always going to be one of my greatest assets – not too many people are 6ft 8in – and hopefully being able to move the ball both ways as well and combining everything.’