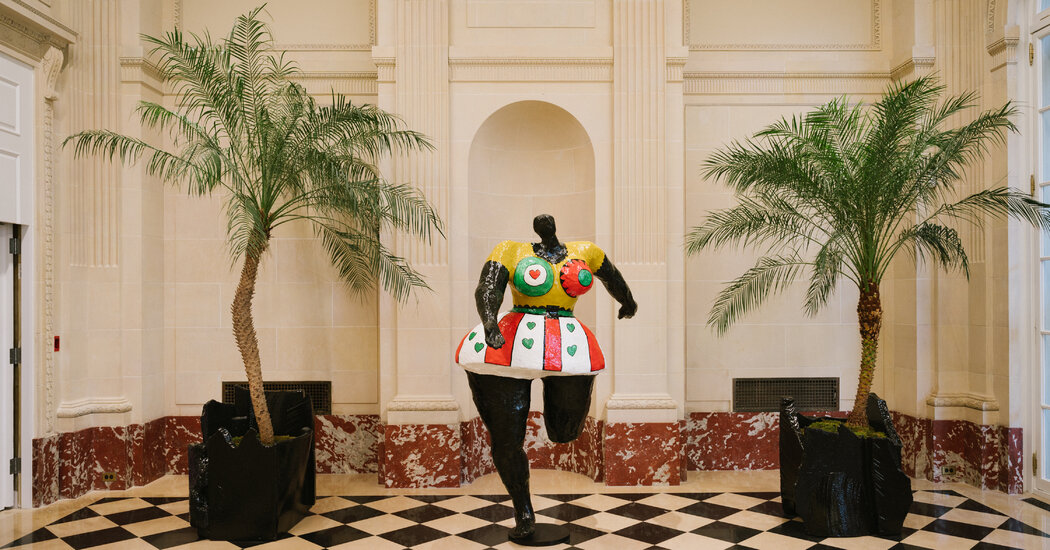 Saint Phalle always wrote alongside her art making, and this show includes many hand-drawn pages for a book on AIDS and its prevention, published in English as “AIDS, You Can’t Catch It Holding Hands.” First written and illustrated in 1986, later adapted for French TV, this openhearted book features Nana-like dancers proclaiming “I love condoms,” and beautiful edicts to love and care for people with H.I.V. and AIDS, long before many political leaders even acknowledged the syndrome.

Yet the PS1 show’s concentration on public engagement and public constructions does make her seem a bit too congenial. It gives us the “good Niki,” with her unpolished, self-taught aesthetic, her communal construction projects and celebration of play, her AIDS advocacy, her confessional diaries. It muffles the “bad Niki,” slayer of good Parisian taste, who wanted art to be “as beautiful as seeing someone killed, or the atom bomb.” And for a show concerned with the artist’s social commitments, it treads rather gingerly over her support for the American civil rights movement. We get a dreamy frieze from 1968 of Nanas of all colors, but not Saint Phalle’s large Black Nanas, which today feel bold and awkward in equal measure.

At Salon 94, by contrast, the racialized Nana is on center stage. The gallery has installed three large sculptures in a winter garden that echoes the design of her first solo museum show, called “Nana Power,” at the Stedelijk Museum Amsterdam in 1967. (“We have Black Power, why not Nana Power?” she said at the opening.) One of them is called “Black Dancer,” balanced on one foot, wearing a miniskirt like a mushroom cap. Another, also on one foot and playing with a beach ball, is titled “Le Péril Jaune” (“Yellow Peril”), from 1969; she has flowers on her breasts and flesh the color of a taxicab. She is a heroic figure, but Saint Phalle’s repurposing of a racist trope for its title carries a serious shock, in the Vietnam era and no less today.

It’s natural to be left uncomfortable by these painted giantesses. They’re more than half a century old. But museums purged of uncomfortable things are also playgrounds of a sort, and Saint Phalle rarely gave audiences the fully approved version of anything. It’s lovely to build a place to gather, but she was both a builder and a destroyer. She was a maker of structures to live in, and a pillager who shot to kill.