Louis Rees-Zammit is getting used to making headlines. Two days after becoming the youngest player to be called up by the Lions since 1959, the boy wonder stole the show with two tries in front of Warren Gatland.

There were no indications that the 20-year-old is ready to rest on his laurels. The players’ official selection letters have not yet arrived in the post, but Rees-Zammit is already receiving endorsements from team-mates that he should be in the Test team.

Northampton had no answer to the winger’s speed, as he accelerated around defenders in the 15th and 62nd minutes of Gloucester’s bonus-point victory. 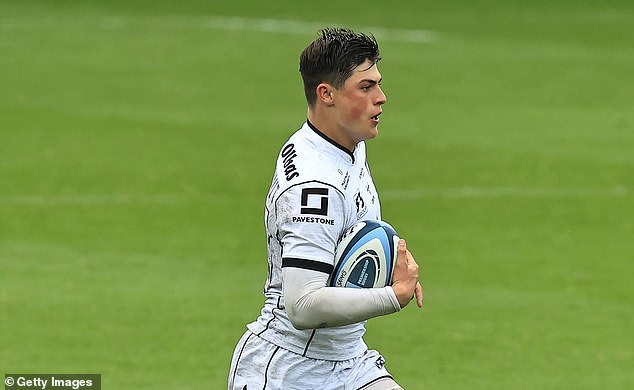 ‘It’s been an outstanding week,’ he said. ‘I was over the moon on Thursday but I had training five minutes later, so it didn’t quite sink in. I had a meal in the evening with my mum, dad and brother to celebrate their 26th wedding anniversary… as well as the Lions selection. I’m absolutely buzzing.’

Gatland must have liked what he saw, although the Lions coach watched on with concern as Saints No 10 Dan Biggar left the pitch with a head injury after 20 minutes. The early diagnosis from Chris Boyd, Saints’ director of rugby, was that his playmaker is ‘ok’ and not showing any symptoms.

The visitors fired every shot. Lewis Ludlow and Jordy Reid were dominant in defence, winning collisions, turnovers and lineout ball. Mark Atkinson provided the attacking fulcrum in midfield, sucking in defenders and getting the ball into the hands of Gloucester’s threats out wide. 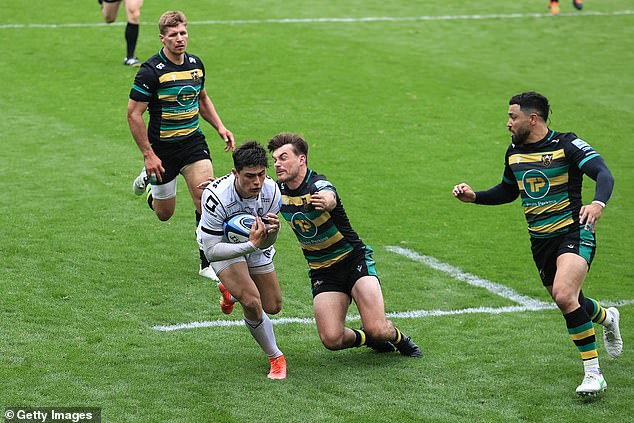 Northampton had no answer to the winger’s speed, as he scored tries in both halves

Rees-Zammit scored the only try of the first half — and Billy Twelvetrees added points from the boot, punishing the hosts for their ill-discipline and failure to adapt to the strong cross winds.

Ed Slater scored Gloucester’s second early in the second half, off the back of George Furbank’s poorly-placed crossfield kick inside his own 22.

Northampton’s top-four push was slipping away and Piers Francis rallied his team-mates under the posts: ‘Phase by phase. This is our f****** season!’

Hooker Jack Singleton added a third for the visitors from a driving maul, before Ludlam took over Saints’ pep talk: ‘There’s still time. Keep our discipline.’ 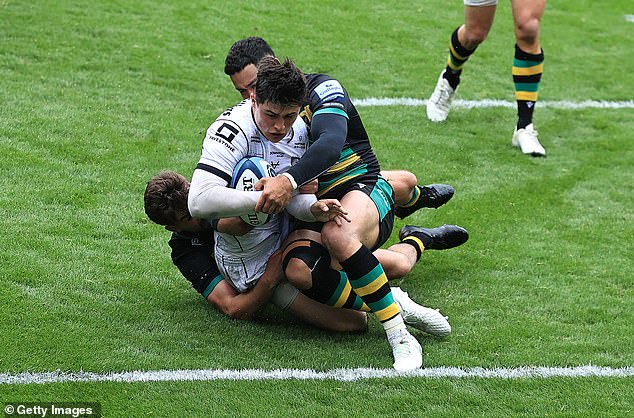 The photographers hovered down Rees-Zammit’s wing, waiting for the man of the moment to score his inevitable second. When he gathered Willi Heinz’s box kick to score the bonus-point try, Northampton lost their cool and piled into a scuffle. Francis and Saints’ Santiago Carreras were sent to the bin for their part in the fracas.

‘Let’s see that aggression in the f****** match!’ barked Teimana Harrison. ‘It’s no good doing it over there.’

Boyd was not impressed. ‘Not a single redeeming feature,’ said the Kiwi coach. ‘The English are good when they walk their dogs because they pick up stuff to put in those little bags… we had a big one of those bags today.’

Gloucester’s Tom Seabrook was sin-binned for a deliberate knock- on, leaving his team with 13 players on the pitch. Northampton finally landed a shot when Henry Taylor sniped over in the 71st minute, but the headlines had already been written.