An Australian Open dominated by the global Covid crisis now looks in danger of being taken over by discussions over the state of Novak Djokovic‘s stomach muscle.

How seriously injured is he? Clearly not bad enough to stop him beating the world’s 14th best player, Milos Raonic, who was put away in four sets as the 33 year-old Serb made it through to the last eight.

Now he faces Germany‘s Alex Zverev, who will have the added distraction of trying to ignore his upcoming opponent’s state of readiness. 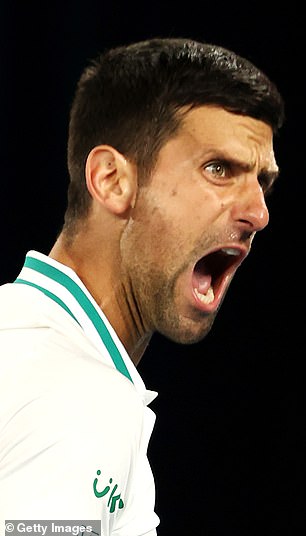 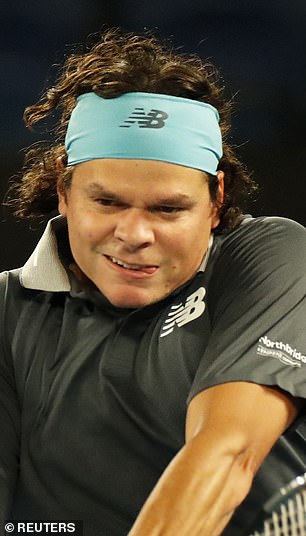 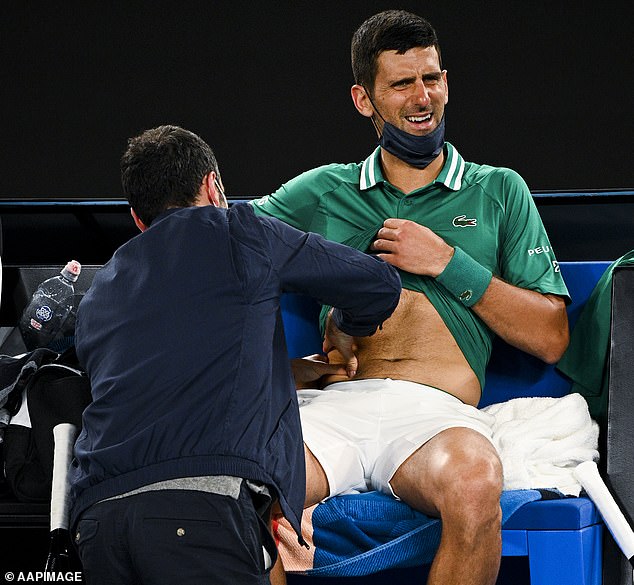 It is fair to assume, after Djokovic defeated the Canadian 7-6 4-6 6-1 6-4, that he is not 100% fit. Likewise that he does not have the muscle tear which he insisted was the case following his undulating third round win over Taylor Fritz.

Djokovic maintained that if it were not this tournament that he has won eight times he would not be competing. He has been warned the painkillers he is taking could be masking the slight possibility of him doing some longer term damage.

While Melbourne continues its five-day Covid lockdown and fans stay at home, much attention is focussed on the strapping around the champion’s right abdomen. 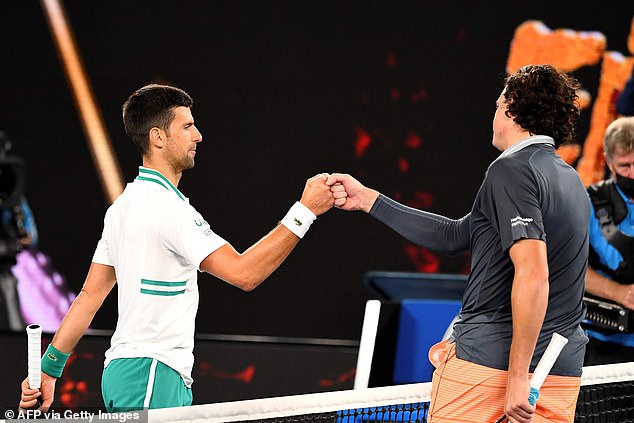 ‘There was no preparation for this match. I used every hour I had since the last match to recover. If it’s any other tournament than a Grand Slam, I would withdraw from the event, that’s for sure.

‘I didn’t know before I finished my warm-up whether I was going to play or not. When it warmed up, it was fine. During the match it was kind of on and off. It’s not ideal but I cannot complain.’

If he can keep body and soul together Djokovic’s path to the title looks all the easier, after the surprise demolition of US Open champion Dominic Thiem by Grigor Dimitrov, off the back of the Austrian’s epic win over Nick Kyrgios.

Thiem vaguely alluded to physical issues afterwards and pointed out that ‘I’m not a machine, I’d like to be.’ 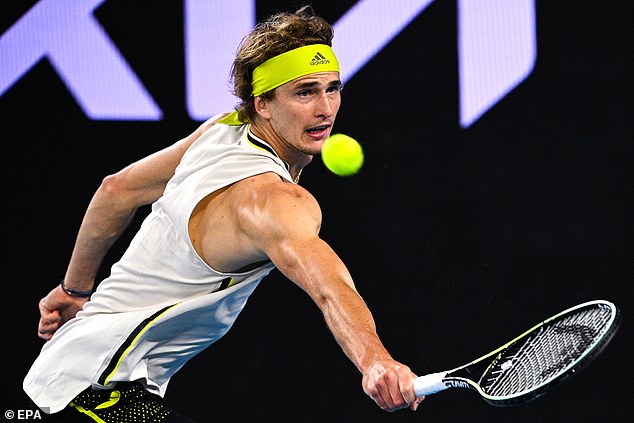 Dimitrov will meet the little-known Russian qualifier Aslan Karatsev, who is the first Grand Slam debutant in 25 years to make the last eight.

After a series of outstanding matches the women’s event sees Serena Williams is facing a repeat of the 2019 Wimbledon final, when she tackles Simona Halep for a place in the last four.

The Romanian produced a tour de force at SW19 that day, and will look to do so again. She came back from a set down to oust French Open champion Iga Swiatek.

Williams edged through 6-4 2-6 6-4 against the huge hitting of Aryana Sabalenka and afterwards said nonchalantly: ‘I was okay with it really. If she wants to play power, let’s go.’

Naomi Osaka needed to save two match points against Garbine Muguruza before winning 7-5 in the third set. She now meets the wonderfully unorthodox Su-Wei Hsieh of Taiwan, who is into a Grand Slam final for the first time at the age of 35. 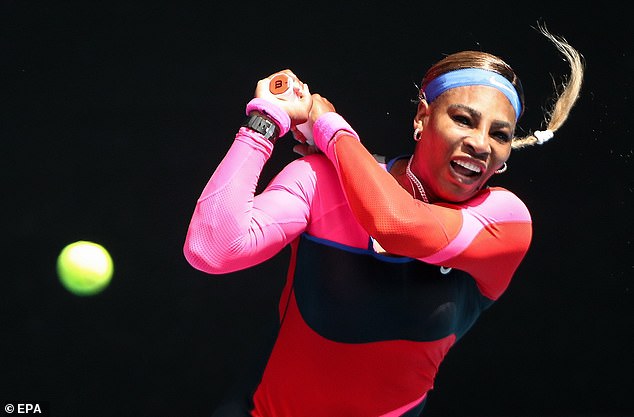