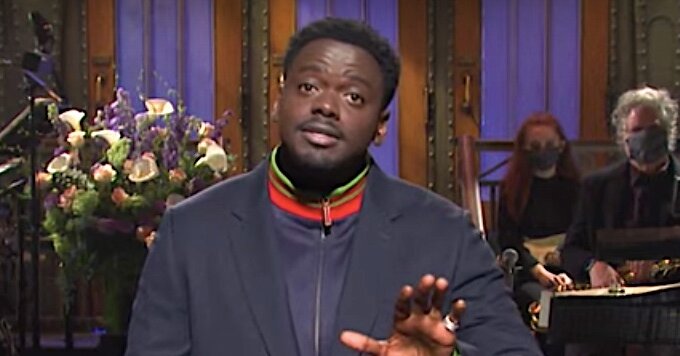 It worked before, so “Saturday Night Live” did it again: this weekend’s broadcast opened with another installment of “Oops, You Did It Again,” a satirical talk show where Chloe Fineman, playing the pop singer Britney Spears, looks back on recent cultural and political controversies.

Fineman explained that the show is where “we shine a light on the social pariahs of the week and I get to decide whether they’re innocent or not that innocent.” She threw in a special acknowledgment of the state of Georgia, which she said was “voted the best place not to vote.”

As Spears, Fineman said that she herself had recently been called out over accusations that someone else writes her social media content for her. Reading from an old Instagram post where Spears wrote, “Who else finds the sea more mysterious than space?” Fineman asked, “Who do they think is writing my account? Jacques Cousteau?”

The show’s first guest was the rapper Lil Nas X (Chris Redd), who has been defending himself after putting out a racy video for his single “Montero (Call Me By Your Name)” and limited-edition Nike sneakers called “Satan Shoes.”

Asked about the criticism and a lawsuit from Nike that followed the release of the shoes, Redd said, “Their whole thing is just do it. Well, I did it.”

As for the detractors of the music video — in which Lil Nas X is seen giving a lap dance to Satan — Redd described them as “closed-minded idiots.” He added, “People are afraid of me because I’m different but really I’m just your typical gay Black country rap sneaker entrepreneur.”

The show’s next guest was the Looney Tunes cartoon character Pepé Le Pew, played by Kate McKinnon who was wearing a skunk costume and wielding a cigarette holder.

McKinnon lamented the fact that the character had been cut from a coming “Space Jam” sequel and told Fineman, “I would kiss you all the way up your arm but I realize that’s no longer socially acceptable.”

McKinnon, in her skunk outfit, explained that career options for Le Pew were limited.

“I would love to be at a point in my career where I can turn down projects but there’s not a lot of parts for old French skunks,” she said. “Every audition comes down to me or Gérard Depardieu.”

Fineman introduced her last guest — “As we’d say in the early 2000s a hot mess and as we’d say today, a full-on sex pest,” she said — Representative Matt Gaetz, played by Pete Davidson.

“My name is Matt Gaetz, like Bill Gates but with a Z at the end,” Davidson said. “Like a cool version for teens.”

Fineman recounted several recent scandals involving Gaetz, including a Justice Department inquiry into whether he had a sexual relationship with a 17-year-old and paid for her to travel with him, and allegations that Gaetz showed nude photos and videos of women he’d had sex with to other lawmakers.

“Which is not a crime,” Davidson said of that last account. “Just horrifying.”

Fineman responded, “I think I can spot a teen predator when I see one. After all I was on ‘Mickey Mouse Club.’”

Davidson said he was not that different from Pepé Le Pew, arguing, “I’m just a ladies’ man.”

With some revulsion, McKinnon replied, “Dude, no. I am a cartoon skunk — you are a United States congressman. Be better, OK?”

Opening Monologue of the Week

This week’s host, Daniel Kaluuya, is a star of films like “Get Out” and he received an Academy Award nomination in March for his performance in “Judas and the Black Messiah.” Still, he knew his natural speaking voice would come as a surprise to some viewers.

As he told the “S.N.L.” audience in his opening monologue, “First of all, I know you’re hearing my accent and thinking, oh no, he’s not Black — he’s British. Let me reassure you that I am Black. I’m Black and I’m British. Basically, I’m what the Royal Family was worried the baby would look like.”

He also revisited his victory at the Golden Globes ceremony in February, when the audio went missing from the acceptance speech that he delivered over Zoom. “I was muted, can you believe that?” Kaluuya said. “I told the best joke of my life and I was muted. I felt like I was in the Sunken Place.”

Fake Game Show of the Week

“S.N.L.” has a proud tradition of sketches centered on fake game shows and, more recently, on game shows with coronavirus themes.

“Will You Take It?” is a fine entry in this growing subgenre: Kaluuya played its host, a fictional doctor trying to convince four members of his extended family (Redd, Ego Nwodim, Kenan Thompson and Punkie Johnson) that they all need to get Covid vaccinations. He reminded Redd that he is a diabetic who has been shot in the lung, but Redd remained reluctant because, as he said, “I never get sick ’cause I sleep in my socks.”

In a further exchange, Redd said he would receive a vaccine “when white people start taking it.” Told that white people have already been getting vaccinated, Redd replied, “Man, you can’t trust white people.”

Weekend Update Jokes of the Week

Over at the Weekend Update desk, the anchors Colin Jost and Michael Che continued to riff on Matt Gaetz and on President Biden’s infrastructure plan.

Representative Matt Gaetz, who looks like a caricature artist’s drawing of me, is reportedly under investigation for an alleged sexual relationship with an underage girl. Because Gaetz believes that only voters should have to show ID. It’s also being reported that Gaetz may have paid for sex with women he met online. That story has since been confirmed by his whole vibe. Gaetz then defended himself, releasing this very normal statement. See if any of it sounds suspicious to you: “Matt Gaetz has never paid for sex. Matt Gaetz has never, ever been on any such websites whatsoever. Matt Gaetz cherishes the relationships in his past and looks forward to marrying the love of his life.” Here’s my response statement: “Colin Jost does not believe you. Colin Jost thinks you have been to alllll the websites. Colin Jost thinks you should hold off on sending out those wedding invites.”

President Biden unveiled his $2 trillion infrastructure plan, which some Democrats are calling the “New New Deal.” But I thought we weren’t allowed to make fun of his stutter. Biden plans to pay for his infrastructure plan by raising taxes on corporations and the wealthy, which, yeah, sounds like a great idea but it leaves me with one big question: How do I hide my money?