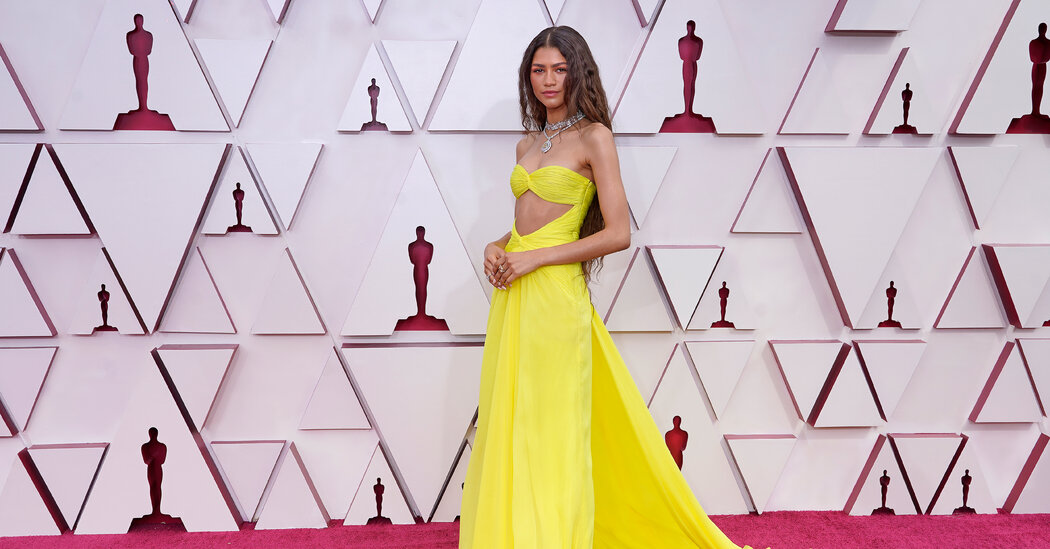 The long walk to Union Station (and the Dolby Theater) may have been the first full-fledged in-person, maskless entrance-making parade since the pandemic began, but instead of a rebirth, it was a return to familiar marketing moment form, replete with big brands and the stars that love them. Or big stars and the brands that pay them? Sometimes it’s hard to tell the difference.

Indeed, aside from a subversive move toward comfort footwear on the part of Chloé Zhao, who wore white sneakers with her glinting knit Hermès dress, and Questlove, who paired his black ensemble with gold Crocs, it was almost like the last year of lockdowns, trauma and social justice had never happened. Or as if we hadn’t actually learned all the things that everybody said they were learning — at least when it came to image-making in all of its layers and dimensions.

During the evening itself, there was palpably emotional personal and political speechmaking. But in the spotlit moments preceding the event, the meaning of the last many months was lacking.

Instead there was … glamour! The dress code was “Inspirational and Aspirational,” and the theme of the evening was “Bring your movie love.” Combine those two ideas and what do you get? Fashion derived from the event itself.

Both Carey Mulligan and Andra Day, best actress nominees, channeled the man of the night and dressed à la statuette, in gold: Ms. Mulligan in a gleaming Valentino bandeau and titanic skirt, and Ms. Day in asymmetric thigh-baring Vera Wang, like a cross between an Amazon and an Oscar with a little Raquel Welch thrown in. Leslie Odom Jr. joined them, wearing a 24-karat Brioni suit and matching shirt.

Angela Bassett (in Alberta Ferretti with exorbitant aerodynamic sleeves, making her look sort of like the “Winged Victory of Samothrace”), Amanda Seyfried (in Armani Privé, channeling old MGM), and Reese Witherspoon (in Dior Grecian drapes) did a sort of meta-homage to the whole concept of the carpet, in red.

There was role-playing, of the fantasy kind. Emerald Fennell started it off in diaphanous floral Gucci, which she named “Susan” and described (in the best line of the night) as “pottery teacher with a business proposition for you that is absolutely not a pyramid scheme.” Maybe all attendees should name their dresses after characters?

Then there was Maria Bakalova, in white Louis Vuitton, having a Cinderella-at-the-ball moment; Viola Davis, in white vine-twining Alexander McQueen, looking like an earth goddess; Regina King, also in Vuitton, doing her own version of “Madama Butterfly” (well, she is one of the monarchs of the moment); and Laura Dern playing both sides of “Black Swan” in a black turtleneck Oscar de la Renta that descended into frothing white ostrich feathers at the skirt.

And speaking of avian life: Colman Domingo was the best-dressed man of the night by being most brightly dressed. He was head-to-toe in bright pink Versace, like a fabulous flamingo.

Generally, when it came to men’s wear, however, penguin suits were out and all-black non-tie was in: see LaKeith Stanfield in a Saint Laurent jumpsuit, Daniel Kaluuya in Bottega Veneta tux and T-shirt (the better to frame a diamond Cartier chain that viewers kept mistaking for pearls thanks to its size) and Riz Ahmed in Prada tux and mock turtleneck. The exceptions being the older attendees — Harrison Ford, Brad Pitt — and the youngest: Alan Kim, the pint-size star of “Minari,” whose Thom Browne shorts suit and knee socks were age-appropriate dressing at its best.

There were no great gaffes; no moments of gleeful dressing disaster. No one fell off her heels or tripped over her giant skirt. Most people, in fact, looked pretty good. The general takeaway seemed to be: Hooray! The red carpet’s back!

But hang on. Not so fast.

Because here’s the thing: Looking good should no longer be enough. After a year of celebrities speaking out on social media about social justice and climate change, after a year of black squares and pledges to support Black-owned businesses, this was a moment to put their image where their Insta was.

Yet aside from Marlee Matlin, in a Vivienne Westwood gown with dramatically draped “Game of Thrones” sleeves made from a vegan textile via a zero-waste cutting technique, all the talk about sustainability and upcycling seemed to have gone out the window. None of the attendees shopped their closets or opted for actual vintage looks, as opposed to vintage-inspired looks.

And aside from Travon Free and Martin Desmond Roe, the directors of the short film “Two Distant Strangers,” who wore matching black tuxes with bright yellow lapels (garish yes, but also eye catching) and linings that contained the names of the victims of police brutality, as well as Nike Airs emblazoned with more names, including George Floyd’s, none of the finery nodded to current events. Or at least did not in any identifiable way.

Or even, for that matter, brought the spotlight to the underrepresented in the red carpet universe: independent designers and designers of color.